England forward Marcus Rashford says criticism of the team's performance in their 0-0 draw against the United States on Friday is unjustified and that fans should withhold judgement until after their final group game against Wales.

The Manchester United forward scored less than a minute after coming on as a substitute in England's 6-2 win over Iran and also came off the bench against the U.S.

England's level dropped drastically against the Americans and they were fortunate not to lose, although they remain in a strong position heading into Tuesday's clash with Wales.

"When you win a game, you are the best team in the world. When you lose, you are the worst. That's football. As players, you have to keep a balance," Rashford, 25, told reporters.

"If we play well in the next game, that USA game will be forgotten. It's not a nice feeling. But to be honest, we don't need fans to boo us to know we have not played well."

"It was a feeling that was mutual amongst the group, that we could have done better. When you don't win, it's disappointing but we can't be so negative about it."

"It's not often teams win all three games. If we can beat Wales then it will be considered a good start."

Gareth Southgate's side will reach the last 16 unless they lose by a four-goal margin to Wales who last beat England in 1984 and victory will ensure they are group winners.

Rashford, who played in the Euro 2020 final, was out of the England picture for 15 months as injuries and a loss of form and confidence saw his career plateau.

He has rediscovered his form this season though and already has eight goals for Manchester United, more than he managed in the whole of the last campaign, earning a place in Southgate's 26-man squad for the tournament in Qatar.

"I'm happy to be enjoying my football. I'm not struggling with any injuries or niggles," he said.

"I can only be thankful for that. It's been good for me to meet up with the lads after being away for such a long time."

Rashford also had some words of support for former United teammate Cristiano Ronaldo who left the club last week by mutual consent after criticising the club in a TV interview.

"It has been an unbelievable experience to play with him. He is one of my idols and someone I always looked up to," Rashford said of the Portuguese forward who this week became the first man to score in five World Cups.

"It's something I can keep with me forever, I wish him all the best and we want to thank him for the things he's done for Manchester United." 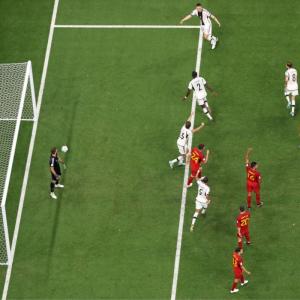