Players of Iran and Germany vie for the ball during their Under-17 FIFA World Cup match at the Nehru stadium, in Margao, Goa. Photograph: PTI Photo

Iran caused the biggest upset of the Under-17 FIFA World Cup, thrashing Germany 4-0, to qualify for the knock-out round, at the Nehru stadium in Margao, Goa, on Tuesday.

They controlled the proceedings throughout the Group C match and scored through Younes Delfi (6th and 42th minute), Allahyar Sayyad (49th) and Vahid Namdari (75th).

Nothing went right for the Germans, who were disorganized in midfield and hardly troubled the rival defence. Their defence also left lot of space, which the Iranians exploited with repeated forays.

Iran, who beat Guinea in their opening match, are now perched atop the group with six points and in the Round of 16.

Germany, who beat Costa Rica 2-1 in their opening match, must beat Guinea in their final group match to qualify for the knock-out round.

Guinea and Costa, who played out a 2-2 draw earlier in the evening, have one point each.

Iran plays their last match in Margao against Costa Rica on October 13 while Germany travel to Kochi to play Guinea.

Iran, who adopted a defensive approach in their last match, preferred to play an attacking game on Tuesday and the move paid off as they took the lead in the sixth minute when Younes Delfi took a shot which deflected off rival defender Jan Boller's foot and found the net.

The early goal left the Germans in shambles. The Iranians attacked the German citadel regularly and could have increased the lead, but ‘keeper Luca twice denied Mohammed Ghobeishavi from scoring. Luca Plogmann once again had to dive to effect a save from llahyar Sayyad in the 25th minute.

The pressure on the Germans was so much that they conceded another goal in the 42nd minute as Younes Delfi once again scored with a glancing header from a free-kick, taken by Mohammed Sharifi.

The Iranians were 2-0 up at half-time. Their defence was solid and did not allow the Germans any space to operate inside the danger zone.

The Germans had only one chance to score in the dying minutes of the first half when John Yeboah's try went over the bar from close.

After the change of ends, Younes Delfi could have scored a hat-trick but German ‘keeper Luca again came to his side's rescue and denied him in the 48th minute when he blocked his shot. However, a minute latter, Delfi made a good move on the right and sent a cross into the box which Allahyar Sayyed headed ball into the net to kill the contest.

Substitute Saeid Karimi then played a one-two pass with Vahid Namdari, who shot home from close to complete the rout.

Brazil took time to break down an ultra-defensive North Korea, but eventually ran away 2-0 victors and qualified for the knock-out round in Kochi.

North Korea, who lost their opening match to Niger 0-1, played most of the Group D match in their own half, often placing all the 10 outfield players behind the ball. The relentless attack from the tournament favourites, however, proved too much for the Asian side as their defence wilted under pressure after the hour mark.

Brazil, who had beaten Spain 1-0 in their opening marquee match, scored through Lincoln (56th minute) and Paulinho (61st) to take full three points and qualify for the round of 16 with one match to spare.

On the other hand, North Korea have a tall task of beating another tournament favourite Spain in their final group match to have any chance of progressing to the knock-out stage. 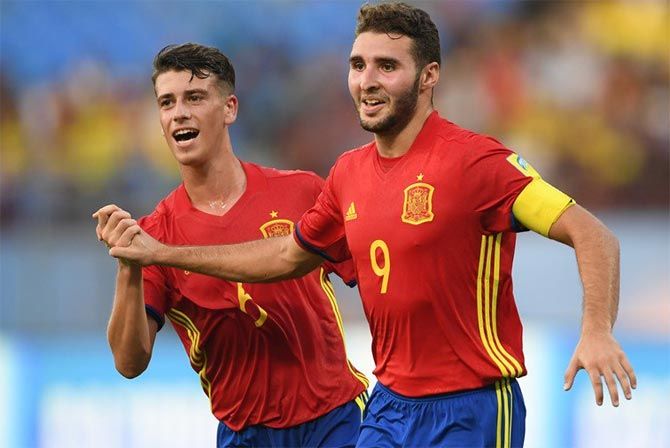 Spain's captain Abel Ruiz, (No. 9), celebrates after scoring against Niger in the FIFA Under-17 World Cup match in Kochi on Tuesday. Photograph: FIFA/Twitter

European powerhouse Spain bounced back from the defeat in their opening match to score a 4-0 victory over Niger in a Group D match of the FIFA Under-17 World Cup in Kochi on Tuesday.

The reigning European champions suffered a 2-1 defeat to South American giants Brazil in their opening encounter last Saturday, but recovered swiftly to open their account in the tournament.

Spain went ahead when Abel Ruiz's tap-in found the back of the net in the 21st minute. Ruiz was at the right place and easily converted Juan Miranda's cross from the left flank, leaving the Niger defence napping.

Spain doubled the lead just before half-time, and again it was Ruiz who was in the thick of things; the Barcelona youth player scored off a Sergio Gomez free-kick in the 41st minute.

Niger's agony did not end there as Spain added one more goal in first-half injury time through Cesar.

Ruiz's attempt was palmed away by the goalkeeper and Gomez sent in a curling cross towards the ball. Even before the ‘keeper could make a clearance, Cesar sent the ball to the roof of the net.

The second half began on a better note for the Africans as went without conceding till Gomez hit the target in the 82nd minute.

The Niger goalkeeper had no chance against Gomez's left-footer from outside the box.

Gomez's strike completed a rout that put Spain firmly in contention for a knock-out berth from the group. 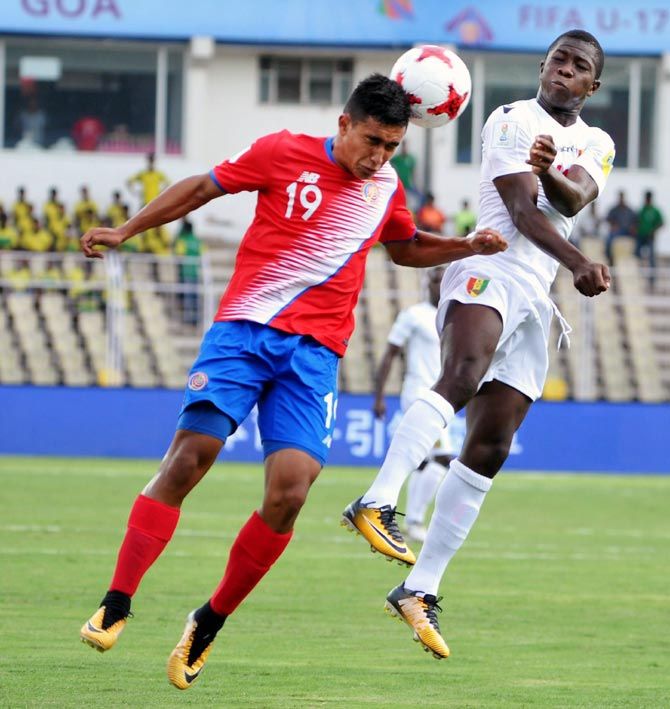 Players of Costa Rica and Guinea vie for the ball during their Under-17 FIFA World Cup World Cup match at the Nehru stadium, in Margao, Goa. Photograph: PTI Photo

Costa Rica, who played a waiting game, keeping their defence compact, took the lead in the 26th minute through Yecxy Jarquin.

Costa Rica again took the lead after the change of ends through Andre Gomez, taking advantage of the shaky rival defence, in the 67th minute. But the African side kept on pressing hard until defender Ibrahima Soumah scored the equaliser in the 81st minute.

Thereafter, it was Guinea all the way who searched for the winner, but Mongtenegro was a tough nut to crack.

The draw kept both the teams' hopes alive as they have a point each.

Costa Rica plays their next match on October 13 in Margao against Iran while Guinea travel to Kochi to play their last match against Germany.

It was Guinea who looked more dominant in the first half as they attacked with steady flow of passes and came close to scoring twice in the first 20 minutes, forcing Monenegro to make diving saves off Fandje Toure and Aquibou Camara.

Costa Rica came up with a counter attack and was successful in taking the lead in the 26th minute.

A move on the left saw Andres Gomes making his way deep inside the box and sent a cross which Yecxy Jarquin just tapped into the net after the defenders failed to intercept the ball.

Referee Robert Madden then allowed a cooling break for the teams and this helped Guinea as they retaliated and found the equaliser soon after the break in the 30th minute.

Naby Bangoura took a bicycle kick from inside the box which Montenegro blocked, but the rebound came to Fandje Toure, who shot home from close.

Thereafter, Guinea were all over the rival citadel even as the Costa Rica goal survived with keeper Montenegro making smart saves.

The Guinea trio of Fandje Toure, Seydouba Cisse and Naby Bangoura combined well and kept the attack going on after change of ends and Costa Rica keeper once again had to make saves off Fandje Toure and substitute Djibril Sylla.

Costa Rica came up with a counter attack and surge ahead in the 67th minute. A move from the middle saw Yecxy Jarquin taking a shot which Guinea keeper Mohammed Camara managed to parry, but the ball came to Andrez Gomez who headed in.

Down by a goal, Guinea went all out in search of an equaliser but keeper Montenegro stood like a rock to deny substitute Djibril Sylla twice. Costa Rica finally succumbed to the pressure with defender Ibrahima Soumeh restoring parity in the 81st minute with a stiff grounder.

Thereafter Guinea pushed four forwards as they made all out effort in search of the winner but the Costa Rica ‘keeper turned out to be the hero.