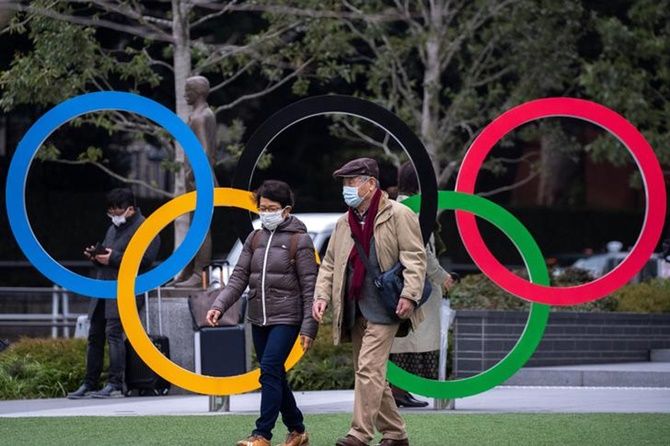 IMAGE: People wearing protective face masks, following the outbreak of the coronavirus, walk past the Olympic rings in front of the Japan Olympic Museum in Tokyo, Japan, on Wednesday. Photograph: Athit Perawongmetha/Reuters

Fears that the new coronavirus outbreak is on the verge of becoming a global pandemic have stoked concerns about the Tokyo Games and while the International Olympic Committee says there is no “Plan B” doubts remain the event will go ahead as planned.

Five months before the opening ceremony in Tokyo, health authorities around the world are scrambling to contain outbreaks of the flu-like virus which has infected about 80,000 and killed more than 2,700 people, the vast majority in China.

Infections have also spiked in Iran, Italy and South Korea while Japan has recorded some 160 cases of the virus as well as 691 discovered onboard a cruise ship docked south of Tokyo.

Sports have been brought to a virtual standstill across large swathes of Asia, and on Wednesday Japanese Prime Minister Shinzo Abe urged sporting and cultural events be scrapped or curtailed for two weeks as part of containment efforts.

Markets have begun pricing in the risk of a cancelled Olympics, with the Dentsu Group’s share price hammered as spooked investors fret about the local ad agency’s high exposure to the Games.

While comments by IOC member Dick Pound on Tuesday stoked concerns about the Games, Japan’s minister in charge of the Olympics sought to quell fears they could be cancelled.

“The IOC is preparing for the Tokyo Games as scheduled,” Minister Seiko Hashimoto said in parliament. 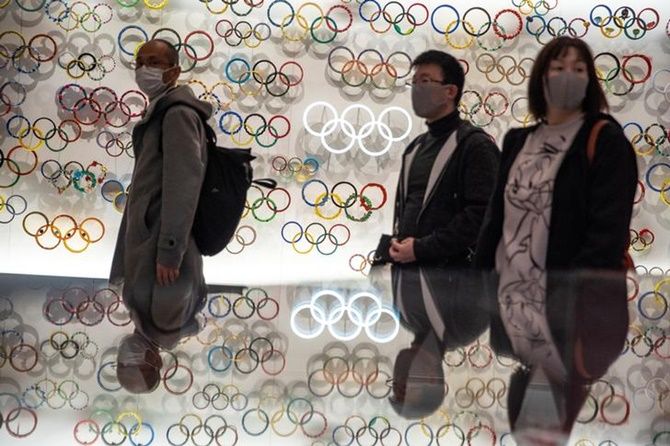 In a briefing with reporters, Japan’s Chief Cabinet Secretary Yoshihide Suga said he had been told by the IOC that Pound’s comment, that any cancellation decision would be made in May, was not the IOC’s official stance.

The quadrennial sporting showpiece was last called off due to World War Two but doubts about Tokyo have grown since Organising Committee chief executive Toshiro Muto said he was “seriously concerned” the virus would pour “cold water” on their momentum.

National Olympic committees remain on a watching brief, relying on assurances from the IOC, which says it is taking advice from Japanese officials and the World Health Organization.

But Australia has said its athletes would not compete if their safety was compromised.

“Australian athletes are ready to make their mark at the Tokyo Olympics — but it should not be at the risk of their health and well-being,” federal health and sports minister Richard Colbeck said in an emailed statement.

No Australian athletes have reported serious concerns about competing in Tokyo, however, and they are being advised to prepare as if the Games will go ahead there, the Australian Olympic Committee has said.

“This is obviously a very serious matter and it’s not something we thought would be happening,” Australia chef de mission Ian Chesterman told reporters in Canberra on Wednesday.

Preparations have already been disrupted for dozens of athletes, with qualifying events postponed and training camps scrapped altogether.

Concerns about athlete safety were also high on the agenda four years ago in the run-up to the Rio Olympics due to fears over an outbreak of the mosquito-borne Zika virus.

Some athletes, including golfer Rory McIlroy and tennis player Simona Halep, pulled out of the Games over Zika but the event went ahead as scheduled.

“It’s a really difficult position because you are thinking about your health and the virus that’s going around but also you train so hard for that one moment and you don’t want to lose that opportunity,” Ennis-Hill told Reuters.

“You do have concerns but you have to trust (that) the World Health Organization and the governing bodies and everyone would not put you in unnecessary risk.”

Dutch gymnast Epke Zonderland, who won a gold at the 2012 London Olympics, arrived in Australia a month ahead of a World Cup event over the weekend because he feared being delayed by virus-related travel restrictions.

“Every time you’re in a plane for a long time, there are a lot of people on board, probably a few are sick with a cold and the air circulates,” he told Reuters in Melbourne in a recent interview.

“There’s a big chance of getting sick, especially as an athlete.”