Philippe Coutinho celebrates after scoring the first goal for Liverpool in the FA Cup quarter-final against Blackburn Rovers on Wednesday. Photograph: Carl Recine/Action Images via Reuters

Philippe Coutinho thumped home a second-half winner as Liverpool broke the resistance of Championship Blackburn Rovers to reach the FA Cup semi-finals with a gritty 1-0 replay victory on Wednesday.

Brendan Rodgers's side, who came into the game after back-to-back Premier League defeats that all but ended their hopes of a top-four finish, will face Aston Villa in a Wembley semi-final.

They came out on top at Ewood Park having dominated possession but struggled to break down the hosts who got men behind the ball and restricted Liverpool to very few sights of goal.

The breakthrough came in the 70th minute when Coutinho exchanged passes with Jordan Henderson from a corner, drove into the box and drilled the ball low into the bottom corner. "From start to finish, I thought we were brilliant tonight," Liverpool's captain on the night Jordan Henderson told BT Sport.

"Now we have a tough game against Villa at Wembley, but it gives the club a good lift."

The victory kept seven-times Cup winners Liverpool on course to win Rodgers's first trophy for the club after a disappointing league campaign that has left them out of the Champions League qualification places.

Rodgers had said winning the FA Cup would represent progress for his side despite failing to make any impact in the league after last season's second-place finish.

It was far from a convincing performance from Liverpool, however, who looked like the confidence had been knocked out of them by consecutive losses to Manchester United and Arsenal.

With the bone-hard and bobbly playing surface making possession difficult, Liverpool, who lost defender Mamadou Sakho to injury early on, spent the first half probing at a pedestrian pace with little success. Blackburn were rolling their sleeves up and keeping numbers in defence, the tried and tested formula for lower league teams hoping to cause a Cup upset.

Liverpool had little more than glimpses of goal in the first half, with Coutinho prodding an effort that was saved by Simon Eastwood and Daniel Sturridge trying his luck with a speculative effort that drifted a fraction too high.

The hosts had two efforts saved by Simon Mignolet at the start of the second half, with the Liverpool keeper tipping Tom Cairney's 25-metre effort over the bar and palming Ben Marshall's firm header on to the post.

Liverpool maintained their stranglehold of the ball, however, and Coutinho's moment of class proved the difference.

© Copyright 2021 Reuters Limited. All rights reserved. Republication or redistribution of Reuters content, including by framing or similar means, is expressly prohibited without the prior written consent of Reuters. Reuters shall not be liable for any errors or delays in the content, or for any actions taken in reliance thereon.
Related News: Liverpool, Philippe Coutinho, Championship Blackburn Rovers, Brendan Rodgers, Jordan Henderson
SHARE THIS STORYCOMMENT
Print this article 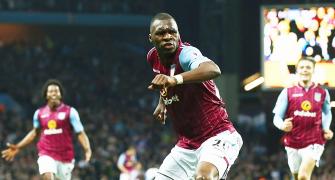