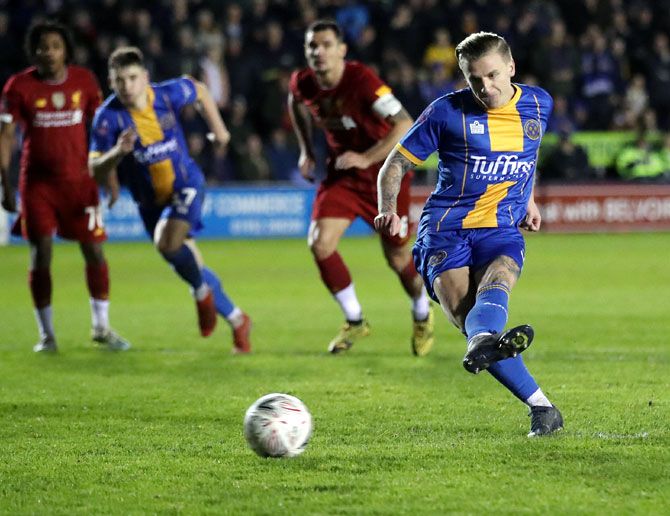 Liverpool surrendered a two-goal lead as they were held to a 2-2 draw by third-tier Shrewsbury Town in the FA Cup fourth round on Sunday after second-half substitute Jason Cummins struck twice to inject some much-needed late magic into the competition.

The Shrews, 59 places below runaway Premier League leaders Liverpool, faced a seemingly impossible task when Donald Love's own goal 28 seconds after halftime put Juergen Klopp's much-changed side 2-0 up after Curtis Jones had opened the scoring.

But unlike Championship side Fulham and League One outfit Tranmere Rovers, thrashed earlier on Sunday by Manchester City and Manchester United respectively, Shrewsbury staged some Cup heroics to roar back and shake their illustrious visitors.

Scottish striker Cummins began the comeback with a penalty after 65 minutes for a foul by Yasser Larouchi on Josh Laurent. Liverpool were rattled and the New Meadow stadium erupted when Cummins raced on to a long ball and fired past keeper Adrian.

In a nailbiting finale Klopp, who had made 11 changes to the side that beat Wolverhampton Wanderers on Thursday, even sent on Mohamed Salah, Roberto Firmino and Alex Oxlade-Chamberlain but Laurent almost won it for Shrewsbury with an audacious attempt.

It will also have put a smile on the faces of neutrals pining for a return of the FA Cup's glory days.

"I told the players at halftime that the game was there for them," said Shrewsbury manager Sam Ricketts.

"The belief within the group is unbelievable. Jason (Cummings) came on (after 60 minutes) and he is a goalscorer.

"I was waiting and waiting to put him on then I finally did and he gets the chances and takes them."

Shrewsbury's reward will be a replay at Anfield.

"We just said to the lads, 'You could have won it, but you all wanted to go back to Anfield didn't you?'" Ricketts said.

Liverpool's lineup was not the familiar-looking one that has seen them waltz 16 points clear towards a first league title in 30 years. But it still contained the likes of Champions League final scorer Divock Origi, Fabinho, Joel Matip and Dejan Lovren.

Klopp has never taken seven-time winners Liverpool past the fourth round but when 18-year-old Jones finished well after 15 minutes and then Love got his angles wrong when making a clearance and gifted Liverpool a second it seemed like job done.

But Shrewsbury had shown an adventurous spirit all game and European champions Liverpool, for once, lacked discipline and focus and invited the hosts to have a go. The home fans were not disappointed with the response from their team.

Cummins was a livewire when he came on and wrote his name into Cup folklore with his second-half double.

"I could have got a hat-trick. It was a dream come true against the best team in the world. Going to Anfield is what it's all about," he said.

The late collapse means Liverpool will have an unwanted fixture in what is supposed to be a winter break and Klopp was far from happy with his side's failure to see it out.

"We don't have enough time to say all the things which weren't right today," the German said. "It just didn't look like it was 2-0 on the pitch. It looked like we were 2-1 down.

"But well deserved for Shrewsbury, it was the minimum they deserved. Congratulations to them." 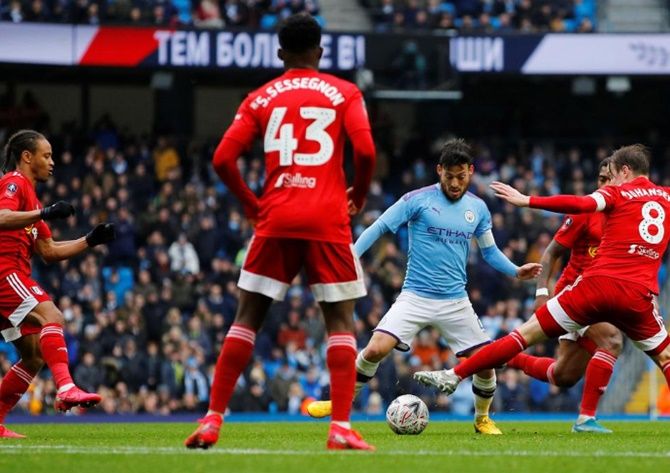 Holders Manchester City served up an attacking masterclass as they thrashed 10-man Fulham 4-0 in the FA Cup fourth round, on Sunday, with Gabriel Jesus scoring twice within three second-half minutes.

Any hopes of Championship side Fulham causing an upset at the Etihad Stadium were dented in less than six minutes after captain Tim Ream received his marching orders for dragging down Jesus inside the box.

“For a few moments I thought it would be a tough game,” City manager Pep Guardiola said. “They’re a team with a lot of courage but it was a bit different after the red card.”

Germany midfielder Ilkay Gundogan converted the resulting penalty for his fifth City goal of the campaign, before Bernardo Silva made it 2-0 for the hosts.

Phil Foden slid the ball across the edge of the box to Silva, who made a sharp turn before driving the ball past Fulham keeper Marek Rodak into the bottom right corner.

City continued to carve open Fulham in the second half, with substitute Raheem Sterling striking the crossbar from close range on the hour mark.

Jesus eventually put the game to bed as he headed home a Joao Cancelo cross from the right wing.

The Brazilian striker made it four, 163 seconds later, when he pounced on a rebound after Foden’s initial attempt had forced a save from Rodak.

Having fallen 16 points behind leaders Liverpool in the Premier League title race, City are now focused on winning the remaining three cup competitions in the second half of the season.

Guardiola’s side are well placed to reach the League Cup final as they hold a 3-1 lead heading into the second leg of the semi-final against local rivals Manchester United on Wednesday.

However, a tougher test awaits in the Champions League, where City meet Spanish giants Real Madrid in the last 16 next month.

“The determination was always there and we will fight to win each competition,” Guardiola added. “Next is United and a chance to get to the final and that is our next target.” 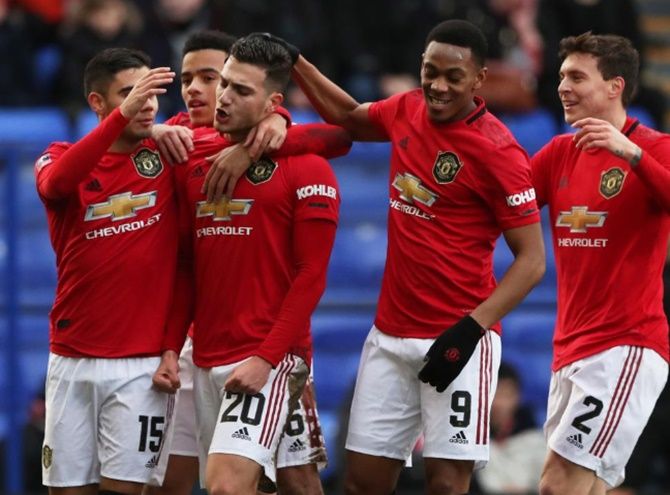 Manchester United thrashed third-tier Tranmere Rovers 6-0 on Sunday to join Manchester City in the fifth round of the FA Cup.

A muddy and bobbly Prenton Park pitch looked the perfect stage for a shock but Tranmere were blown away as Harry Maguire’s early thunderbolt settled any United jitters.

Tranmere had knocked out Premier League Watford in a replay on Thursday but apart from an early flurry of pressure they were never in Sunday’s tie as United scored five times before the break.

Diogo Dalot, who like Maguire had not scored all season, made it 2-0 after weaving into the penalty area and delivering a fierce finish before Jesse Lingard curled a right-footed shot inside the post for only his second goal of the season.

Phil Jones got in on the act with a looping header from a corner, ending his own near six-year goal drought, before Anthony Martial added a fifth goal just before the break.

It was the first time since 2001 that United had scored five before halftime and they continued the onslaught after the break when Mason Greenwood converted a 56th-minute penalty.

Earlier, holders Manchester City beat Championship side Fulham 4-0 — a task made easier as Fulham played virtually the whole game with 10 men after Tim Ream was red-carded for conceding a penalty converted by Ilkay Gundogan.

Bernardo Silva made it 2-0 and Gabriel Jesus scored twice after the break as City reached 100 goals for the season in all competitions, the first club to do so in Europe’s top leagues.