F1 aims to rev up in May after Bahrain, Vietnam GP postponed 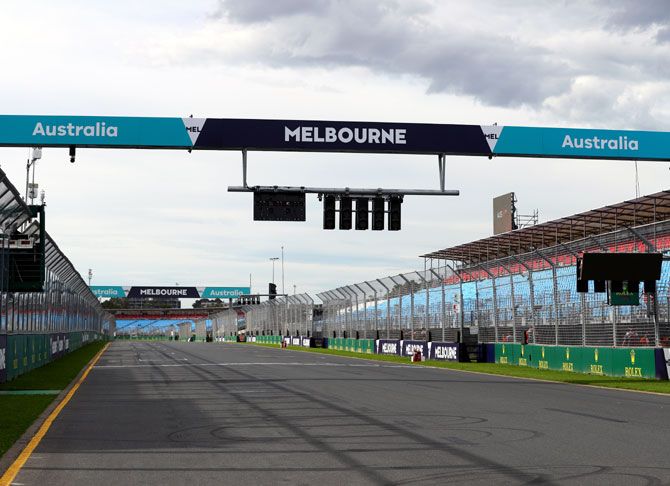 IMAGE: The Australian Grand Prix was cancelled on Friday because of the coronavirus outbreak only hours before the first practice session was scheduled to get underway at Albert Park. Photograph: Robert Cianflone/Getty Images

Formula One plans to start its coronavirus-ravaged season in May after cancelling this weekend's opener in Australia on Friday and postponing the next three races in Bahrain, Vietnam and China.

Confusingly, while Formula One said in a statement it expected to begin the championship in Europe at the end of May, the governing FIA's statement referred to May 1. Both may prove optimistic as the virus spreads across the continent.

"The global situation regarding COVID-19 is fluid and very difficult to predict and its right we take time to assess the situation and make the right decisions," Formula One chairman Chase Carey said.

An end of May date would rule out the Dutch and Spanish races currently scheduled for May 3 and 10 in Zandvoort and Barcelona. Monaco, a glamorous highlight of the motor racing calendar, is round seven on May 24.

The Australian Grand Prix in Melbourne was cancelled on Friday because of the coronavirus outbreak only hours before the first practice session was scheduled to get underway at Albert Park.

That was followed by the postponement of Bahrain's March 22 race, already scheduled to be run without spectators under floodlights at the Sakhir circuit, and the debut of Vietnam in Hanoi on April 5.

Formula One had already postponed the April 19 Chinese Grand Prix in Shanghai.

McLaren announced on Thursday they would not be racing in Australian after an employee tested positive for the virus and champions Mercedes then called for a cancellation.

That in turn made Bahrain's postponement inevitable, with some team members in quarantine.

Zandvoort is a home Grand Prix for Red Bull's Max Verstappen, with tickets sold out almost as soon as they went on sale. Formula One is likely to want to keep that alive for as long as possible.

A ban is already in force in the Netherlands on gatherings of more than 100 people, however.

The prospect of an extended break was mooted by Formula One even before the latest round of postponements.

"And we use that opportunity to say 'right, for this time at the beginning of the year we won't have any races. We'll look at relocating those races later in the year.

"And I think by freeing up the August break we give ourselves several weekends when we could have a race and I think we can build a pretty decent calendar for the rest of the year. It will look different."

The break runs from the August 2 Hungarian Grand Prix to Belgium on Aug. 30.

There is some scope to squeeze races into weekends later in the year, with a gap between Brazil and the Abu Dhabi season-ender in November that could be stretched further if the final race is pushed into December.

Any race cancellation is a major concern for teams, whose budgets depend on a share of the sport's revenues, and Formula One's US-based commercial rights holders Liberty Media.

"The teams survive on their funding from races. So this will have an impact on the teams' budgets for the future," said Brawn.

"It will have an impact on our economics as a company. Each race you lose, then it has an impact."

Formula One's 2020 calendar was supposed to be a record 22 races, with Vietnam and the Netherlands coming in and Germany departing.