Brazilian Felipe Massa announced on Tuesday he is leaving Ferrari at the end of the season, opening the door for Kimi Raikkonen to return to the Formula One team that took him to the title in 2007.

"I would like to thank the team for all the victories and incredible moments experienced together.

"For next year, I want to find a team that can give me a competitive car to win many more races and challenge for the Championship...," he added. 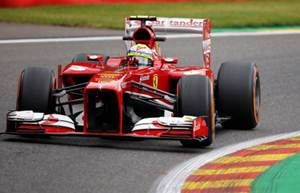 Raikkonen, who currently races for Lotus, has been widely tipped to return to the team he left in 2009 to make way for Spain's double champion Fernando Alonso.

There was no word from the team, however, with Ferrari chairman Luca di Montezemolo earlier avoiding questions about the Finn when questioned by reporters at the Frankfurt motor show.

"We won't talk about Formula One today," the Italian said. "I am trying to convince a driver to come back and am speaking to Schumacher tomorrow," he joked.

Paddock whispers after last weekend's Italian Grand Prix at Monza spoke of a done deal, although Lotus also said they were still hoping to keep their man and Germany's Nico Hulkenberg has also been considered to be in the frame.

Raikkonen has plenty of supporters among the passionate Ferrari 'tifosi' as the team's first champion of the post-Schumacher era, and last to date, and his return would be a break with Ferrari tradition as much as a blast from the past.

If he is named as Massa's replacement, and unless Alonso also drops a bombshell, Ferrari will have a former world number one on both sides of the garage next season for the first time since most fans can remember.

While speculation about Massa's future has been a regular occurrence of recent seasons, this time the Brazilian recognised he had run out of road and his exit could leave his country without any driver on the starting grid.

Massa has not won since 2008, when he was overall runner-up, and has been on the podium just once this year. But he was a loyal team mate to Alonso who made clear who he would rather have in the other red car.

A Ferrari vacancy, the seat every aspiring racing driver dreams of, is a rare occurrence - leaving aside the occasional stand-in role - and headline news in Italy.

"We are putting on the table all the elements," Ferrari team principal Stefano Domenicali told reporters after the race at Monza on Sunday, adding that the decision was not an easy one to take.

Image: Felipe Massa of Brazil and Ferrari drives during practice for the Belgian Grand Prix