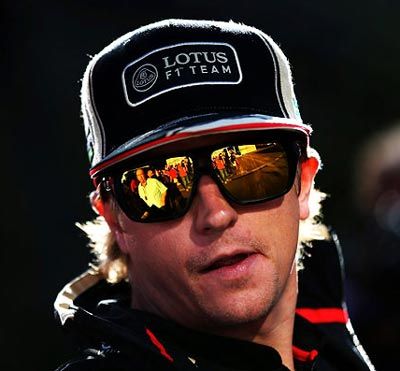 Ferrari chairman Luca di Montezemolo shunned questions about Kimi Raikkonen on Tuesday amid mounting speculation that the 2007 Formula One champion could be back at Maranello next season.

"We won't talk about Formula One today," the Italian told reporters at the Frankfurt motor show. "I am trying to convince a driver to come back and am speaking to Schumacher tomorrow," he joked.

Paddock whispers after last weekend's Italian Grand Prix at Monza spoke of a done deal, although Lotus are still hoping to keep their man and Ferrari team principal Stefano Domenicali said no decision had been taken.

Raikkonen has plenty of supporters among the passionate Ferrari 'tifosi' as the team's first champion of the post-Schumacher era, and last to date, and his return would a break with Ferrari tradition as much as a blast from the past.

Assuming Alonso does not produce any bombshell of his own and that it is Felipe Massa who is replaced, Ferrari would have a former world number one on both sides of the garage next season for the first time since most fans can remember.

The German notched up five of his seven titles with Ferrari, taking all but 19 of his 91 wins with the Italian team in the decade between 1996 and 2006.

Britain's Eddie Irvine and Brazilians Rubens Barrichello and Massa managed just 15 wins between them as his team mates over that period.

While speculation about Massa's future has been a regular occurrence of recent seasons, this time it seems the Brazilian has run out of road.

He has not won since 2008, when he was overall runner-up, and been on the podium just once this year.

"Between the improbable confirmation of Massa and the probable arrival of Raikkonen, it's not difficult to imagine what Alonso would prefer," said Tuesday's Gazzetta dello Sport newspaper.

Alonso, who endured a fiery 2007 season with Lewis Hamilton at McLaren, would undoubtedly prefer a more subservient partner.

A Ferrari vacancy, the seat every aspiring racing driver dreams of, is a rare occurrence - leaving aside the occasional stand-in role - and the arrival of a champion even rarer.

"We are putting on the table all the elements," Domenicali told reporters after the race on Sunday.

"We want to put all the consideration before taking the right decision and we will announce and say something on that as soon as we have finalised our discussion, because it is for sure not an easy decision for us."

© Copyright 2021 Reuters Limited. All rights reserved. Republication or redistribution of Reuters content, including by framing or similar means, is expressly prohibited without the prior written consent of Reuters. Reuters shall not be liable for any errors or delays in the content, or for any actions taken in reliance thereon.
Related News: Enzo Ferrari, Kimi Raikkonen, Fernando Alonso, Michael Schumacher, Felipe Massa
COMMENT
Print this article