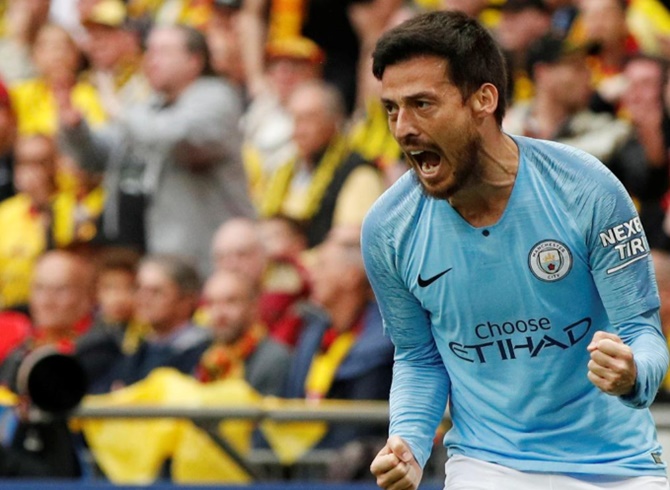 Manchester City midfielder David Silva has said he will leave the Premier League champions at the end of the 2019-20 season.

Asked if he would stay beyond next season, the 33-year-old Spaniard was quoted as saying by the BBC: “No, this is the last one.

“Ten years for me is enough. It’s the perfect time for me.

“Initially, City were talking about two years, but I decided to sign (for) another one, so I finished at 10 years.

“It completes the cycle. It’s a nice round figure. I can never see myself playing against City for another team. So 10 years - that’s it.”

Derby give Chelsea nod to open managerial talks with Lampard

Derby Country have given Chelsea permission to speak to their current manager Frank Lampard about the possibility of taking over at Stamford Bridge, the Championship club said on Tuesday.

Lampard has emerged as the favourite to replace Maurizio Sarri at Chelsea, after the Italian joined Serie A champions Juventus earlier this month.

“With pre-season fast approaching for both clubs it is hoped this will allow Chelsea to swiftly conclude their discussions,” Derby said in a statement, adding they would not comment further until it was appropriate to do so.

Lampard, who won three Premier League titles and the Champions League as a player at Chelsea, led Derby to the Championship playoff final last season in his first year in management.

Studious Kompany ready to take Anderlecht back to the top

Vincent Kompany began his managerial career at Anderlecht on Tuesday by saying he was no Pep Guardiola but the Belgian club can expect a student of the game who has learnt a lot.

The Belgium central defender held his first news conference on his second day in the job, having ended his stellar career at Manchester City to return to his first club as player-coach.

The 33-year-old will certainly bring with him much of the wisdom he acquired in the Premier League under Guardiola.

“It was like being at university every day. He explained everything with such clarity and I learnt an enormous amount from him,” Kompany told reporters.

“I am no Guardiola by any means, let me make that clear. But I think I was a good student.”

Kompany will be seeking to take Anderlecht back to their dominant role in Belgian football after a season in which they were well behind the front-runners.

“I understand that there is a lot of work, but I’m really looking forward to starting. I have the chance to make my mark here and I’m proud that I have that opportunity,” he said.

Kompany, who told Guardiola he was leaving City the day before May’s 6-0 FA Cup final win over Watford, said he had been lured back to Anderlecht after discussions with the club’s owner Marc Coucke and sporting director Frank Arnesen.

“The idea of becoming a player-manager has grown gradually, by talking to Coucke, Arnesen and (board member Michael) Verschueren.

“The chance was too big for me to turn down and I think it was the right time to make this decision. Returning as a player only was not an option.”

Belgian football has been on the rise in recent years with talent spread across Europe’s top five leagues, and Kompany believes the potential at Anderlecht is enormous.

“There is more talent at Anderlecht today than when I started, much more,” he said. “We came sixth last year, so we have to get better than five other teams in one season.

“But my opinion is that with a few changes we can get there. I’m convinced of that.

© Copyright 2020 Reuters Limited. All rights reserved. Republication or redistribution of Reuters content, including by framing or similar means, is expressly prohibited without the prior written consent of Reuters. Reuters shall not be liable for any errors or delays in the content, or for any actions taken in reliance thereon.
Related News: Chelsea, Vincent Kompany, Manchester City, Frank Lampard, Anderlecht
SHARE THIS STORYCOMMENT
Print this article