Players from Saudi Arabia’s national soccer team travelled to Jerusalem’s Old City on Monday to pray at one of Islam’s holiest sites.

The players visited the Noble Sanctuary, a compound that houses the Golden Dome of the Rock and al-Aqsa Mosque, the third holiest shrine in Islam.

“This is the most beautiful day in my life,” said Yasser Al-Mishal, the president of the Saudi Football Federation.

“Really, it’s hard to express my feelings. I thank God that I could visit al-Aqsa mosque and pray inside the mosque.”

The Dome of the Rock is built where the Prophet Mohammad is said to have ascended to heaven and it encompasses the Foundation Stone, a rock holy to Muslims, Jews and Christians. Jordan has custodianship of the holy sites.

The area is one of the most sensitive sites in the Israeli-Palestinian conflict. It is revered by Jews as Temple Mount, the site of two biblical Jewish temples, and is situated in a part of Jerusalem captured by Israel in the 1967 Middle East war and annexed in a move that has not been recognised internationally.

The Saudi players are due to face the Palestinian national team in the occupied West Bank on Tuesday for a World Cup qualifying match. Paris St Germain forward Neymar will be out of action for four weeks because of a thigh injury, the Ligue 1 leaders said on Monday.

“Neymar underwent an MRI (scan) this afternoon... a medical check up will be done in eight days but his return to competition is expected in four weeks depending on the evolution (of the injury),” PSG said in a statement.

Neymar picked up the injury during Brazil’s 1-1 draw against Nigeria in a friendly game in Singapore on Sunday.

The striker is set to miss PSG’s two Champions League games against Club Brugge next week and on Nov. 6.

© Copyright 2021 Reuters Limited. All rights reserved. Republication or redistribution of Reuters content, including by framing or similar means, is expressly prohibited without the prior written consent of Reuters. Reuters shall not be liable for any errors or delays in the content, or for any actions taken in reliance thereon.
Related News: Neymar, PSG, Jerusalem Muslim, IMAGE, Reuters
SHARE THIS STORYCOMMENT
Print this article 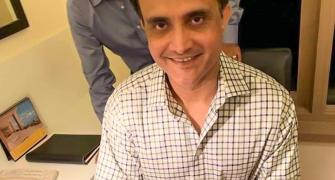