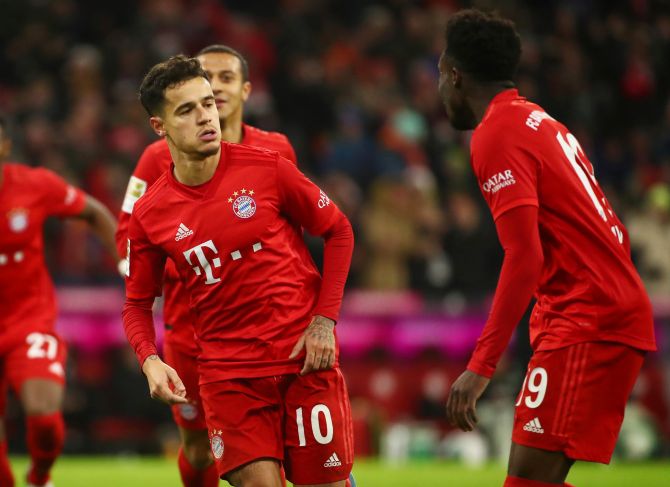 IMAGE: Bayern Munich's Philippe Coutinho celebrates with Alphonso Davies on netting a hat-trick and the team's sixth goal during their Bundesliga match against Werder Bremen at Allianz Arena in Munich. Photograph: Michael Dalder/Reuters

The Bavarians, missing several players through injury, climbed to fourth place on 27, four behind leaders Borussia Moenchengladbach who are in action against VfL Wolfsburg on Sunday.

Bayern fell behind in the 24th minute from a Milot Rashica goal after once more wasting several golden chances, including missed chances from top scorer Lewandowski, as had been the case in recent weeks.

But their wastefulness was not to be punished this time with goals from Coutinho in the 45th minute, and Lewandowski in first-half stoppage time, turning the game for the hosts.

Brazilian Coutinho then chipped a superb David Alaba pass over the Bremen keeper for their third in the 63rd minute as Bayern completely dominated after the break.

Poland forward Lewandowski added their fifth after 72 minutes and Thomas Mueller also got on the scoresheet before Coutinho completed his impressive performance with a hat-trick. 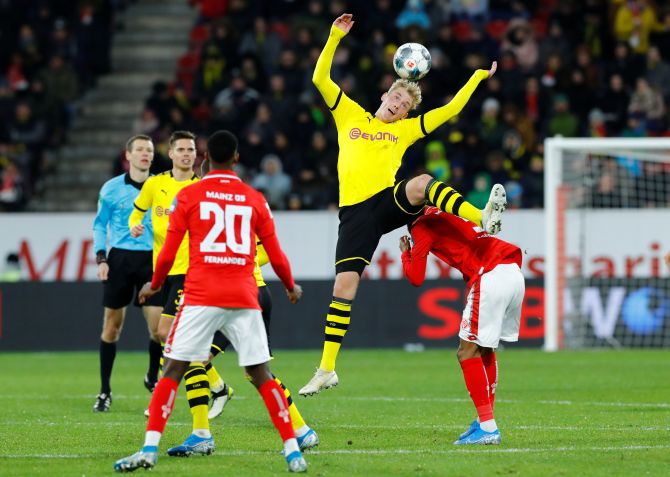 Borussia Dortmund eased past Mainz 05 4-0 on Saturday to notch their third straight league win and tighten their hold on third place in the Bundesliga.

Days after advancing to the Champions League knockout stage, captain Marco Reus put the visitors ahead with a thundering first-half shot, and Jadon Sancho grabbed his eighth league goal in the 62nd to double their lead.

The England international also hit the post after Thorgan Hazard made it 3-0 with a fine shot in the 69th. A Nico Schulz low drive six minutes from time capped a strong Dortmund performance.

Dortmund are third on 29 points, two behind leaders Borussia Moenchengladbach, who travel to VfL Wolfsburg on Sunday, and two ahead of fourth-placed Bayern Munich. RB Leipzig, second on 30, can go top with a win over Fortuna Duessldorf later on Saturday.

East Bengal rode on a Marti Crespi's goal in the dying minutes to secure a narrow 2-1 win over debutants TRAU FC in their I-League clash in Kalyani, West Bengal, on Saturday.

Marcos Espada headed home beautifully from a Samad Ali Mallick cross to give East Bengal a 17th minute lead but their defence was exposed at the stroke of half-time with Deepak Devrani making it one-all, scoring off a Phalguni Singh pass.

Just at the match was meandering towards a draw, it was Crespi who nudged the ball into the net off a deflected header from Marcos in the 89th minute, handing them a second consecutive win ahead of next Sunday's high-profile derby against Mohun Bagan.

The win took East Bengal to the top of the I-League standings with eight points from four matches, while TRAU remained at the bottom after three losses in a row.

Odisha FC to play home matches in Bhubaneswar from December 27

After playing their first three home games in Pune in the sixth season of Indian Super League, Odisha FC will host their matches in the city's Kalinga Stadium in Bhubaneswar from December 27.

Their first game in Bhubaneswar will be against Jamshedpur FC.

Owing to the delay in the completion of the upgradation work at the Kalinga Stadium for the FIFA U-17 Women's World Cup 2020, the Bhubaneswar-based ISL club had to shift their first three games to Pune.

Of those three matches, Josep Gombau's Odisha FC drew against ATK, lost to Bengaluru and won their last game against Hyderabad FC.

Odisha FC CEO Ashish Shah said, "It has been a tough season so far for the entire team as we have played all games away from Bhubaneswar. We are happy to now play in front of our fans. People in the state are very passionate about sports and we are hopeful that they will come in big numbers to support us at our home - Kalinga Stadium."

OFC head coach Josep Gombau also expressed his delight saying, "It's a huge news for us that from December 27 we will play at our home. To play at our home is our wish because you play in front of your fans and you feel strong when you play at home.

"It has been a big journey for us and we are now happy and excited to play in front of our fans."

"People of Odisha must be proud of us as we played away matches and got positive results as well."

FC Goa beat ATK 2-1 in an entertaining match to go on top of Indian Super League points table in Margao on Saturday.

After a barren first-half, the game saw three goals in six minutes after the break which ultimately settled the match in favour of the home side.

Mourtada Fall (60th) headed in the opener for FC Goa but ATK equalised through Jobby Justin (64th). Ferran Corominas (66th) made an impact at the other end two minutes later to restore his side's advantage.

With 15 points from eight matches, Sergio Lobera's team displaced ATK at the top of the table. Antonio Habas's men are second with 14 points.

A delightful goal by substitute Bafetimbi Gomis gave Asian champions Al Hilal a 1-0 win over their African counterparts Esperance and took them into the Club World Cup semi-finals on Saturday.

The former Swansea City, Olympique Lyonnais and Galatasaray player ran onto a ball between the Esperance defence, flicked it over Mohamed Ali Yacoubi's sliding challenge and, without letting it touch the ground, fired into the far corner in the 73rd minute.

The Frenchman, who was top scorer in the Asian Champions League with 11 goals, had only been on the field for eight minutes before his strike earned the Saudi Arabian side a match against South American champions Flamengo on Tuesday.

Esperance have been knocked out in their first match all three times they have taken part in the competition.

The Tunisian side, backed by a noisy contingent of fans who managed to evade a ban on pyrotechnics, had the first real chance after the Al Hilal defence lost the ball, but Anice Badri shot wide with the goalkeeper out of his ground.

Carlos Eduardo wasted Al Hilal's first opening when he took a heavy first touch after Andre Carillo sent him clear, and his shot was smothered by goalkeeper Moez Ben Cherifia.

Carillo himself went close when his shot was tipped up in the air by Ben Cherifia and a defender headed the ball away.

Esperance were nearly gifted a goal after halftime when Al Hilal's Yasser Al-Shahrani slid in to intercept a pass through the middle but sent the ball looping towards his own goal and goalkeeper Abdullah Al-Mayouf clawed it away just in time.

Gomis finally broke the deadlock, while Al Hilal had to play the last few minutes with 10 men after Mohamed Kanno was given two yellow cards in quick succession and sent off.