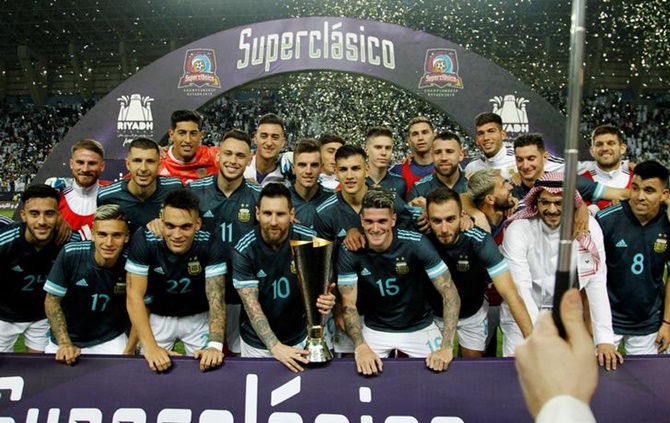 IMAGE: Lionel Messi poses with the trophy along with his Argentina teammates as they celebrate beating Brazil in the Superclasico international friendly, at King Saud University Stadium, Riyadh, on Friday. Photograph: Ahmed Yosri/Reuters

Lionel Messi returned from international suspension to score the winner in Argentina's 1-0 victory over Brazil in Saudi Arabia on Friday.

The Barcelona striker, who missed four games after calling the South American Football Confederation "corrupt," scored after 14 minutes to give Argentina a deserved victory in the so-called Superclasico.

The result extended Brazil’s win-less run to five games since they lifted the Copa America in July, their worst such run since 2013.

Brazil beat Argentina 2-0 the last time these teams met in the Copa America semi-finals and they should have taken a ninth minute lead but Gabriel Jesus fired a penalty kick wide after he had been brought down in the box.

Brazil, who were without Paris St Germain striker Neymar, had two-thirds of the possession but rarely threatened the Argentine goal in a game that featured 41 fouls and six yellow cards.

Argentina, meanwhile, looked more sprightly, even without Sergio Aguero and Paulo Dybala, both of whom were unused substitutes.

Argentina have now won three of the five games they have played since their semi-final exit at the Copa America.

Khaoui, Khazri at the double as Tunisia beat Libya

Tunisia's Saif-Eddine Khaoui and Wahbi Khazri each scored twice in a 4-1 win over Libya in Rades on Friday to ensure a strong start to the 2021 Africa Cup of Nations qualifying campaign.

Olympique de Marseille forward Khaoui netted his first international goals either side of the break following the opener from Khazri, who knocked in the rebound in the 33rd minute after his penalty was saved and struck again late on.

In the other Group J match, Tanzania came from behind to defeat Equatorial Guinea 2-1 in Dar es Salaam.

Salum Abubakar got a spectacular winner with a scorching drive from outside the box in added time.

Pedro Obiang had given the visitors a first-half lead as his speculative shot somehow beat Tanzania goalkeeper Juma Kaseja, but Simon Msuva levelled for the hosts in the 69th as he turned home the rebound after his initial header struck the post.

Morocco’s indifferent start under new coach Vahid Halilhodzic continued when they were held to a 0-0 draw by Mauritania in their Group E encounter in Rabat.

Zimbabwe also played out a goalless draw with Botswana in their Group H clash in Harare in which the hosts made all the chances but had little firepower in front of goal.