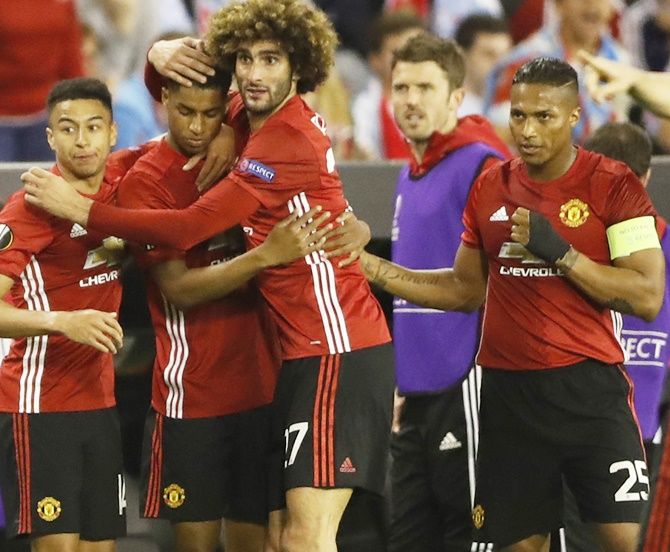 The victory puts United on course for this month's final with Ajax Amsterdam the most likely opponents after they beat visitors Olympique Lyonnais 4-1 in their first leg on Wednesday.

Celta keeper Sergio Alvarez had denied United several times but was powerless to stop Rashford's 67th minute strike soaring into the net after the striker had won the free-kick.

Despite the victory coach Jose Mourinho was frustrated with his side's inability to take their chances and knows there is still a job to do in the return leg at Old Trafford next week.

"I am very pleased with the performance but not with the result. At halftime it should have been three or at least two (goals) but the result is open,” the Portuguese told reporters.

"We played well enough to have the result closed but we have to go and play at Old Trafford.... We tried to win the match but we missed chances, but the team played well. They were compact against a side who are difficult to play against." Three-times European champions United had never reached the last four of the Europa League or its predecessor the UEFA Cup, while Celta were in their first major continental semi-final.

Injury-hit United had also only won twice in 22 visits to Spain and knew they were in for a tough battle in Galicia.

Celta made the first clear-cut opening for the unmarked Daniel Wass who headed wide from close range before Rashford then forced Alvarez into a flying save from distance.

Alvarez thwarted Henrikh Mkhitaryan and Jesse Lingard in one-on-one situations in quick succession before the break and Lingard missed a gilt-edged chance as United were frustrated.

The game became stretched and, with Celta enjoying their best spell of possession, United broke on the counter. Rashford strode away and drew a foul from Hugo Mallo 25 metres out.

Daly Blind dummied the set piece, which slightly threw Alvarez who took a step to his left allowing Rashford to curl the ball expertly past him into the far corner.

Aspas then fired narrowly wide and Pogba tried to catch Alvarez out of position with a free-kick from just inside Celta's half but the ball hit the side netting.

United's victory was slightly soured when 19-year-old Rashford hobbled off 10 minutes from time clutching his knee.

To add to United's growing injury list, substitute Ashley Young was forced off with a hamstring problem in added time.