Rashford double as Man United fight back to beat Omonia 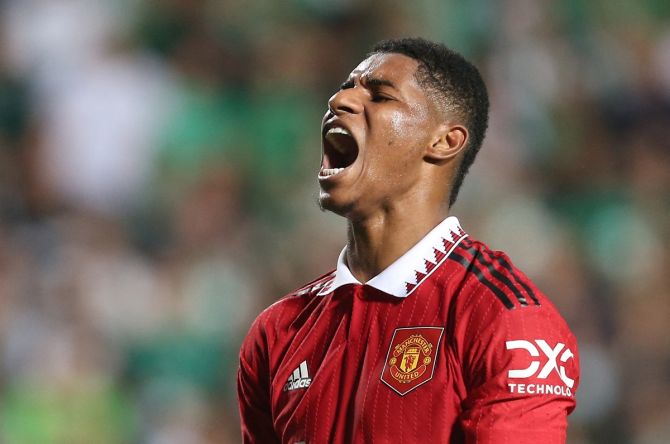 Substitute Marcus Rashford scored twice as Manchester United fought back from a goal down to beat Omonia Nicosia 3-2 in Europa League Group E on Thursday.

Real Sociedad stayed top of the group standings thanks to a 2-0 win at Sheriff Tiraspol secured by goals from David Silva and Aritz Elustondo.

United, thrashed 6-3 by Manchester City on Sunday, dominated the opening stages but were stunned in the 35th minute when their Cypriot hosts scored through Karim Ansarifard following a counter-attack.

As the teams went into the break, boos and whistles rained down from the stands from the United supporters.

Rashford emerged after halftime and needed only eight minutes to equalise with a well-placed shot from just outside the box into the far corner.

The England forward then produced a clever backheel to set up fellow substitute Antony Martial who put United ahead.

Rashford struck again six minutes from time, tapping in Cristiano Ronaldo's pass, but Nikolas Panayiotou pulled one back for Omonia a minute later to ensure a tense finale.

United moved on to six points in the group standings, three behind leaders Sociedad.

Lazio, looking to bounce back from an embarrassing 5-1 loss at Midtjylland, could only manage a 0-0 draw at Sturm Graz in Group F.

In Group C, Ludogorets and Finnish champions HJK Helsinki fought out a 1-1 draw in Helsinki.

PSV Eindhoven's Yorbe Vertessen scored twice in a 5-1 rout of their hosts FC Zurich in Group A.

In Belgrade, Red Star crushed Hungary's Ferencvaros 4-1 to give the 1991 European Cup winners hope of advancing from Group H and Wissam Ben Yedder was the hero for AS Monaco, scoring twice in a 3-1 home win over Turkish side Trabzonspor.

Arsenal ease to 3-0 win over Bodo/Glimt Arsenal cruised to a 3-0 home win over Norwegian side Bodo/Glimt to move clear at the top in Group A.

Arsenal dominated in the first half at the Emirates, pushing the Norwegian champions onto the defensive and forcing them into mistakes.

The Premier League side took the lead game after 23 minutes when Kieran Tierney's shot from the left rebounded off the post back into the box, where Eddie Nketiah tapped it in.

Glimt had more of the game in the second half, creating half-chances with Amahl Pellegrino seeing his low shot superbly saved by keeper Matt Turner in the 57th minute.

Vieira wrapped up the win for Arsenal in the 84th minute after Gabriel Jesus dribbled past two Glimt defenders.

Real Betis beat AS Roma 2-1 away thanks to Luiz Henrique's 88th-minute winner to maintain their 100 percent record in Group C.

Michy Batshuayi was on target as Fenerbahce beat AEK Larnaca in Group B, with the Belgian opening the scoring in the 26th minute, while Dynamo Kyiv were beaten 2-1 by Stade Rennais to remain without a point after three games.

Union Saint-Gilloise's Gustaf Nilsson scored in the 86th and 94th minutes as they fought back to beat Portuguese side Braga 2-1 away in Group D.

Feyenoord were held to a 2-2 draw by Midtjylland after the Danish side fought back from 2-0 down in Group F.

In Group G, leaders Freiburg grabbed a 2-0 win at home against Nantes thanks to goals from Daniel-Kofi Kyereh and Vincenzo Grifo while Qarabag beat Olympiakos 3-0 win away. 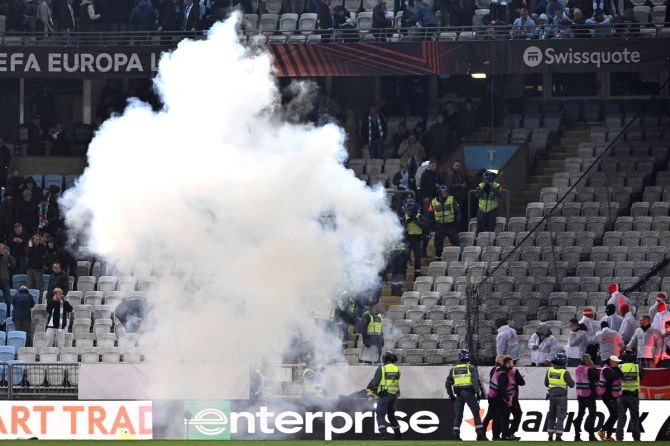 IMAGE: Police officers and stewards are seen after fireworks were set off on the pitch and in the stands. Photograph: Johan Nilsson/TT News Agency /Reuters

Malmo's match against Union Berlin was interrupted for around 20 minutes in the second half after fans threw fireworks onto the pitch.

Swedish media reported that Union Berlin supporters threw fireworks onto the pitch shortly after the second half started and Malmo supporters responded by throwing a flare.

Reuters has contacted European soccer's governing body UEFA for comment on the incident.

The game resumed and ended in a 1-0 win for Union Berlin after Sheraldo Becker scored in the 68th minute.

Malmo are bottom of Group D with no points after three games, while Union are third with three points.