Images from the Europa League matches played on Thursday night. 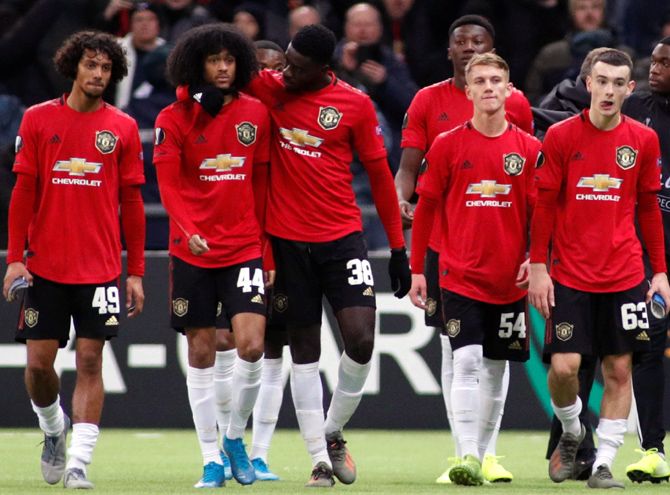 Kazakhstan's Astana fought back to beat a youthful Manchester United side 2-1 at home on Thursday, earning their first points in the Europa League's Group L this season.

United captain Jesse Lingard fired them ahead in the 10th minute with a fizzing low shot from 20 metres before Dmitri Shomko and a Di'Shon Bernard own goal turned the match on its head shortly after halftime.

United manager Ole Gunnar Solskjaer, who left the bulk of his first-team players at home ahead of a busy Premier League schedule, was upbeat despite the defeat.

“You've got to put (the youngsters) on the pitch before you know if they're good enough,” the club's former striker told Manchester United television.

“At times we were excellent and the short spells we let them push us back cost us in the end because it was a big 10-minute spell they had in the second half.

“These boys have learnt a lot and have given me food for thought and I'm very pleased with many of them. I'm just sorry they couldn't go away with a win because I think they deserved it.” 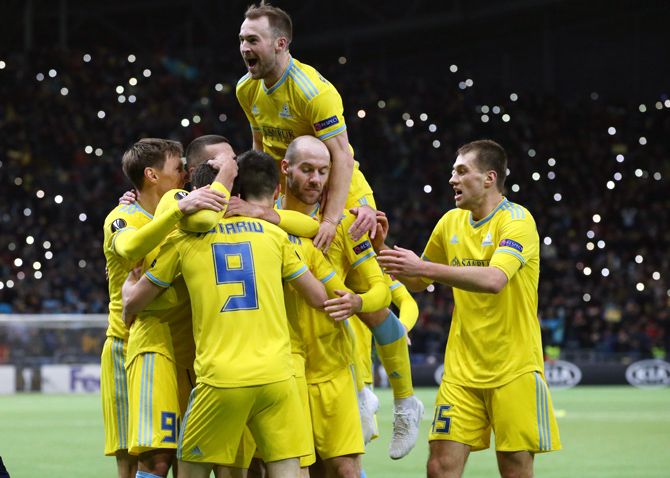 United's team was packed with academy products, including three starters playing at senior level for the first time, and they took the game to Astana as Lingard delighted the 1,000 away fans with a scorcher into the bottom left corner of the net.

Tahith Chong was guilty of an astonishing miss in the 54th minute when he fired over a gaping goal from five metres and United were punished shortly afterwards as Astana scored two quickfire goals.

Shomko equalised barely 30 seconds later when he steered a low shot from 10 metres past United's 36-year-old goalkeeper Lee Grant, who also made his full debut for the club.

Wolverhampton Wanderers, Braga, Vfl Wolfsburg, Sporting and AZ Alkmaar all booked places in the Europa League knockout stages on Thursday but struggling Arsenal must wait after losing at home to Eintracht Frankfurt at a half-empty Emirates.

Arsenal must wait after home loss 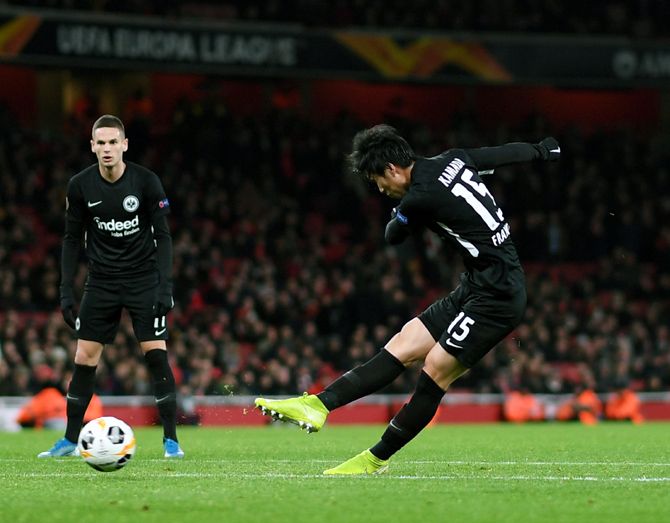 Gent, LASK and APOEL Nicosia also reached the last 32 but Arsenal's woes continued as Frankfurt's Daichi Kamada scored twice to secure a 2-1 win over Unai Emery's team in their Group F clash on a night when places in the last 32 were up for grabs.

The North London side are still likely to go through but won't be able to confirm their spot until their last game at Belgian side Standard Liege, who drew 1-1 at Vitoria SC.

Arsenal had taken the lead in the first half through Pierre-Emerick Aubameyang, but Japanese midfielder Kamada's double after the break increased the pressure on under-fire Emery.

Arsenal have now played seven games in a row without a win in all competitions for the first time since 1992. Frankfurt's winning goal saw home fans holding up cards saying “Emery Out”.

Their 48-year-old Spanish manager cut a lonely figure on the sidelines as his sorry side failed to conjure up an equaliser.

Sporting had no such problems as they hammered visiting PSV Eindhoven 4-0 to qualify from Group D and will be joined by LASK of Austria who beat Norwegians Rosenborg 2-1 in Trondheim.

APOEL Nicosia cruised to a 2-0 win at Dudelange and got a helping hand from Group A winners Sevilla, who beat Qarabag by the same scoreline to put the Cypriots through as runners-up.

Lazio got the 1-0 win they needed over CFR Cluj to keep their hopes alive, while Scottish champions Celtic secured top spot in Group E with a 3-1 win at home to Stade Rennes.

Group B is still up for grabs after FC Copenhagen eliminated Lugano with a 1-0 away win and Malmo beat Dynamo Kiev 4-3 with a last-gasp Markus Rosenberg goal as the 37-year-old scored his second goal of the night in his last home game for the club.

In the early games, Wolverhampton Wanderers and Braga played out a thrilling 3-3 draw to book their last-32 spots. 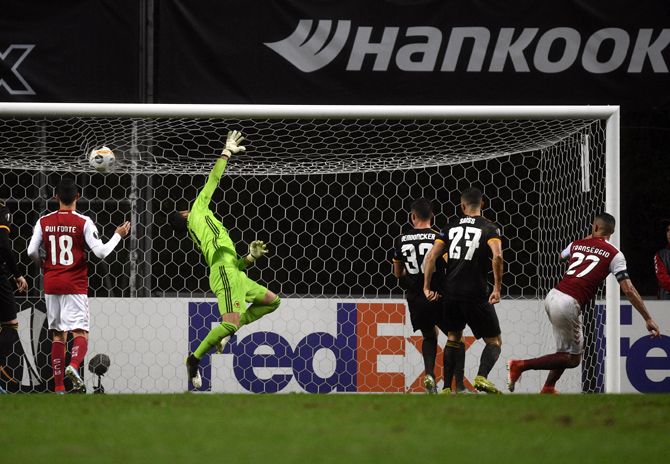 Wolves were pegged back by Braga after taking a 3-1 halftime lead on a poor pitch in the Portuguese rain but both sides qualified from Group K as Besiktas, who were already out of contention, ended Slovan Bratislava's hopes with a 2-1 win.

Ten-man Alkmaar had substitute Ferdy Druijf to thank for two late goals as they recovered to draw 2-2 at home to Partizan Belgrade in Group L and join leaders Manchester United, whose second-string side lost 2-1 at Astana, in the knockout phase.

Wout Weghorst's penalty put Wolfsburg through with a 1-0 win against Ukrainians Oleksandriya and were joined by Group I leaders Gent, who drew 0-0 at French side Saint Etienne.

AS Roma boosted their hopes of qualifying from Group J by winning 3-0 at Istanbul Basaksehir with first-half goals from Jordan Veretout, Justin Kluivert and Eden Dzeko, while Borussia Moenchendgladbach went top with a 1-0 win at Wolfsberger AC.

In Group G, Porto grabbed a lifeline with a 2-1 away win over Swiss side Young Boys to keep themselves in contention, while Scottish side Rangers moved into first place on eight points with a gritty 2-2 draw at Feyenoord.

Already-qualified Espanyol missed the chance to secure top spot in Group H as they drew 2-2 away to Ferencvaros, and Russian side CSKA saw their chances of progressing evaporate as they were held to a 1-1 draw by Ludogorets in Moscow.