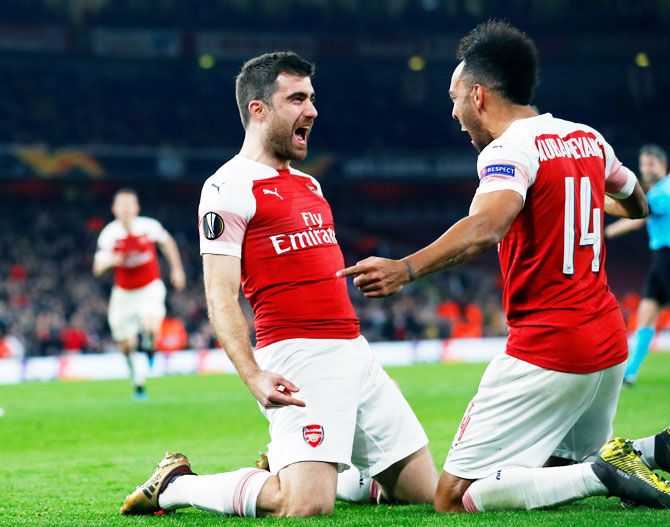 IMAGE: Arsenal's Sokratis Papastathopoulos celebrates with Pierre-Emerick Aubameyang after scoring their third goal against BATE Borisov in their Round of 32 second leg match at Emirates Stadium in London on Thursday. Photograph: Eddie Keogh/Reuters

Arsenal and Chelsea put patchy domestic form behind them to reach the Europa League last 16 and they were joined by fellow big guns from Italy on a night of rip-roaring action in the continent's second-tier competition on Thursday.

Arsenal beat BATE Borisov 3-0 after a 1-0 first-leg defeat by the Belarus champions while Chelsea took some of the pressure off coach Maurizio Sarri with a 3-0 home defeat of Malmo which gave them a 5-1 aggregate win over the Swedish side.

Eintracht Frankfurt beat Shakhtar Donetsk 4-1 to earn a 6-3 overall victory and Napoli, winners of the UEFA Cup in 1989, had no problems beating FC Zurich 2-0 at home to advance 5-1 on aggregate.

Inter Milan, the winners of three European Cup and UEFA Cup titles apiece, also strolled through with a 4-0 home win over Rapid Vienna which completed a 5-0 dismissal.

Salzburg were the other big winners as their 4-0 home rout of Club Bruges gave the Austrian side a 5-2 aggregate win while two goals from Iran forward Sardar Azmoun handed Zenit St Petersburg a 3-2 overall success against Fenerbahce.

Rattled by embarrassing domestic defeats, Chelsea looked jittery before Olivier Giroud settled their nerves with a close range tap-in shortly after halftime at StamfordBridge following good work by N'Golo Kante and Willian in the build-up.

Malmo had central defender Magnus Bengtsson sent off in the 73rd minute for a second bookable offence, moments before Ross Barkley curled in a delightful freekick from 20 metres.

Callum Hudson-Odoi put the icing on the cake in the closing stages with a fierce low shot from inside the penalty area, boosting Chelsea's confidence ahead of Sunday's clash with ManchesterCity in the League Cup final at Wembley.

An early Zakhar Volkov own goal put Arsenal on level terms at the Emirates stadium as the defender turned a low cross by Pierre-Emerick Aubameyang into his own net in a frantic opening.

Shkodran Mustafi made it 2-0 with a thumping header from a Granit Xhaka corner and the Switzerland midfielder delivered another impressive set-piece for Sokratis Papastathopoulos to head home on the hour. 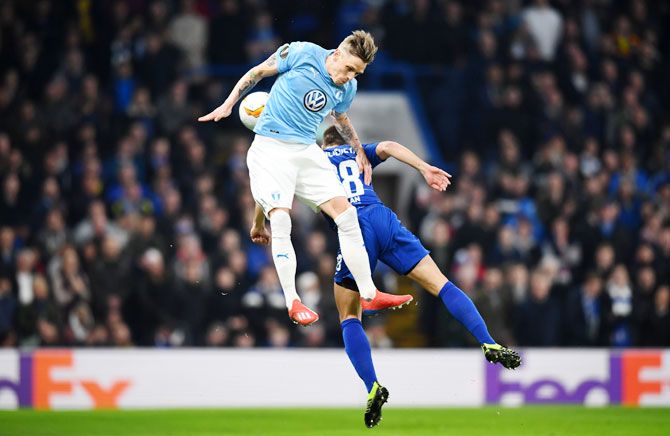 Goals by Simone Verdi and Adam Ounas sent Napoli on their way and Inter followed in their footsteps as Matias Vecino, Andrea Ranocchia, Ivan Perisic and Matteo Politano made light work of their return leg against Rapid.

Following a 2-2 draw in Ukraine, Eintracht thumped Shakhtar 4-1 in an action-packed encounter with Sebastian Haller and Luka Jovic putting the German side in the driving seat before Junior Moraes pulled one back for the visitors.

Marlos came close to an equaliser when he hit the woodwork before Haller netted his second and substitute Ante Rebic sealed the tie with a crisp low shot from 20 metres.

Salzburg wiped out a 2-1 first-leg deficit thanks to a clinical first-half brace by Zambian forward Patson Daka after Xaver Schlager opened the scoring in the 11th minute. Munas Dabbur made it 4-0 late on.

Goals from Magomed Odzoev and Azmoun gave Zenit a 2-0 lead against Fenerbahce to put them on course for a last-16 berth after a 1-0 first-leg defeat in Istanbul.

Their progress looked in peril after Mehmet Topal hauled the Turkish side back into the tie shortly before halftime but Azmoun sealed the win in the 76th minute.

Croatian champions Dinamo Zagreb thrashed Viktora Plzen 3-0 for a 4-2 aggregate win over the Czechs while a Kevin Gameiro goal gave Valencia a 1-0 win over 10-man Celtic who had Jeremy Toljan sent off in the first half.

Bayer Leverkusen were the surprise casualties after a 1-1 home draw with Krasnodar sent the Russian side through on away goals and Real Betis were beaten by Rennes 6-4 on aggregate following a 3-1 home defeat by the French side.

Slavia Prague stunned Belgians Genk 4-1 away after a goalless first leg and Dynamo Kiev edged Olympiacos 3-2 on aggregate thanks to a 1-0 home win in the return fixture.

A 0-0 home draw with Galatasaray was enough to see former European Cup winners Benfica through after their 2-1 away win a fortnight ago.

© Copyright 2021 Reuters Limited. All rights reserved. Republication or redistribution of Reuters content, including by framing or similar means, is expressly prohibited without the prior written consent of Reuters. Reuters shall not be liable for any errors or delays in the content, or for any actions taken in reliance thereon.
Related News: Chelsea, Malmo, Sardar Azmoun, BATE Borisov, Arsenal
COMMENT
Print this article 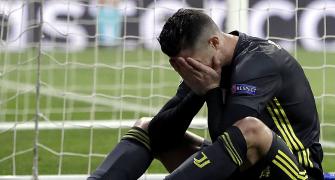 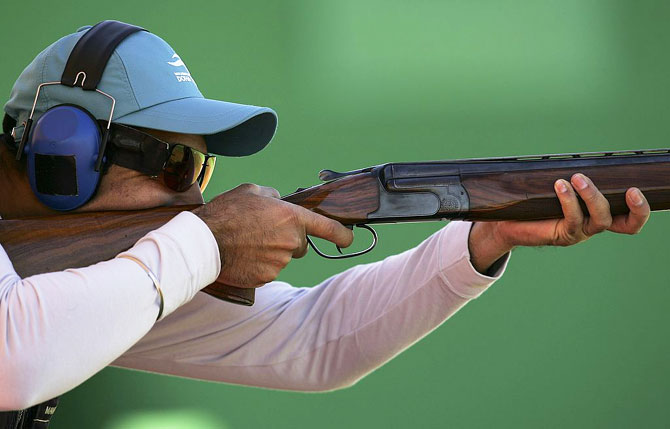