Five-times European champions Liverpool survived a late scare to move into the last 32 of the Europa League with a 1-0 win over Italian side Udinese on Thursday.

The Premier League club were joined by compatriots Tottenham Hotspur, former European champions Steaua Bucharest, VfB Stuttgart and Basel as the last five clubs through to the knockout stages.

Inter Milan, already qualified, were astonishingly held to a 2-2 draw at home by Azerbaijan's Nefti Baku. 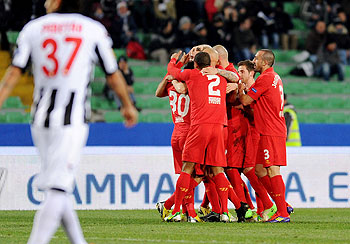 Nineteen-year-old Marko Livaja twice put the Serie A side ahead but Rashad Sadygov cancelled out the first goal and Chilean Nicolas Canales snatched a point with an 88th-minute header.

Liverpool midfielder Jordan Henderson's first strike of the season after 23 minutes helped Liverpool to leapfrog Group A leaders Anzhi Makhachkala, though Antonio Di Natale blazed a good chance over the bar with the last kick of the game.

Udinese played the last 11 minutes with 10 men after Giovanni Pasquale's dismissal and Di Natale could have eliminated Liverpool altogether but he wasted a great late chance as Anzhi lost 3-1 at Young Boys in Berne.

Liverpool, Anzhi and Young Boys all finished on 10 points but the Russians' better record over the Swiss club in a three-way head-to-head took them into the knockout stages along with the English group winners.

"We were in a difficult group with good teams," said Liverpool manager Brendan Rogers.

Steaua's 10 men held Copenhagen 1-1 to progress as Group E winners on 11 points with Stuttgart in second on eight and level with the Danes but the Germans progressed owing to a better head-to-head record.

Steaua were reduced to 10 men in the 49th minute when Cristian Tanase was sent off but took the lead through Raul Rusescu after 72 minutes, with Copenhagen exploiting their advantage only late on but to no avail.

Tottenham beat Panathinaikos 3-1 to take the final Group J slot behind winners Lazio who breezed to a 4-1 win at Maribor. Emmanuel Adebayor put Spurs ahead and Clint Dempsey and Jermain Defoe grabbed late goals to seal a convincing victory.

Basel's 0-0 draw at Group G's top club Racing Genk ensured that Hungary's Fehervar, whose match at Sporting was postponed to Friday due to a waterlogged pitch, went out.

Holders Atletico Madrid, already assured of last-32 action, lost 1-0 to Viktoria Plzen to finish second by a point in Group B behind the Czechs.

Girondins Bordeaux won the battle for top spot over Newcastle United in Group D, the French club running out 2-0 victors to reach 13 points with the Premier League side on nine.

In Group C, Fenerbahce had already made sure of top place ahead of Borussia Moenchengladbach while in Group F Ukraine's Dnipro Dnipropetrovsk, 4-0 winners over AIK Solna, had secured first place ahead of Napoli, who lost 3-1 at home to PSV Eindhoven but still advanced.

European champions Chelsea, knocked out of the Champions League on Wednesday, head the eight teams who failed to qualify from Europe's top-tier competition this week and will make up the 32 in the draw on December 20.

© Copyright 2020 Reuters Limited. All rights reserved. Republication or redistribution of Reuters content, including by framing or similar means, is expressly prohibited without the prior written consent of Reuters. Reuters shall not be liable for any errors or delays in the content, or for any actions taken in reliance thereon.
Related News: Liverpool, Anzhi Makhachkala, Steaua Bucharest, Basel, Di Natale
SHARE THIS STORYCOMMENT
Print this article
Del Potro stuns Federer to win Basel title 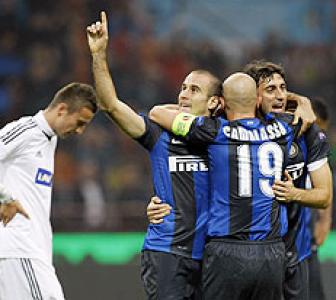 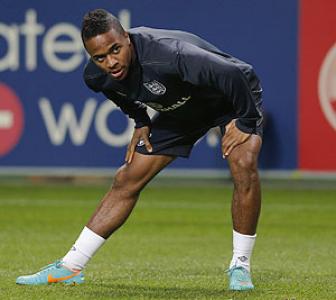 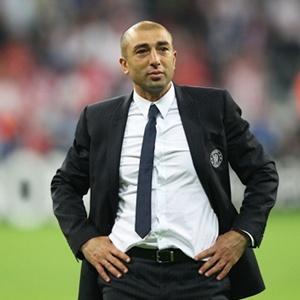