Goals from Jan Vertonghen and Jermain Defoe left Tottenham Hotspur on the cusp of the Europa League knockout stages as four other clubs maintained perfect starts on Thursday.

Fiorentina, Salzburg, Eintracht Frankfurt and Ludogorets joined Spurs on nine points from three games with a place in the last 32 beckoning. Defoe, with his sixth Europa League goal in four games, equalled Martin Chivers' club European record of 22 for Spurs with the second goal in a 2-0 win in Moldova over Sheriff Tiraspol.

Former England striker Chivers was part of Spurs' UEFA Cup-winning side of 1972.

Spurs could have qualified for the last 32 with three group games still to play but needed Anzhi Makhachkala and Tromso to draw in the other Group K game. Anzhi won 1-0, though, to leave Spurs waiting a bit longer.

Substitute Victor Machin equalised two minutes from time as Sevilla salvaged a 1-1 draw against Slovan Liberec in the Czech Republic to stay top of Group H with seven points.

The hosts led through Michael Rabusic's first-half goal but had goalkeeper Premysl Kovar dismissed on 78 minutes and Machin rounded his replacement Lukas Hrosso to level late on.

The Spaniards moved on to six points in Group A, one behind Swansea City who conceded a penalty in stoppage time that secured Kuban Krasnodar a 1-1 draw in Wales.

Fiorentina, fresh from a remarkable fightback from 2-0 down to beat Juventus 4-2 in Serie A on Sunday, brushed aside Romania's Pandurii 3-0 in Group E while Salzburg continue to impress.

They set a record of 31 games unbeaten in the Austrian Bundesliga at the weekend and got the better of a feisty Group C encounter with Standard Liege in which three players saw red.

Salzburg, who won 2-1 thanks to goals from Jonathan Soriano and Ramalho, had Sadio Mane sent off late in the first half, shortly after Mehdi Carcela-Gonzalez was dismissed for Liege.

The Belgians were reduced to nine men on 67 minutes when Brazilian defender Kanu was shown a straight red.

Lazio relinquished top spot in Group J to Trabzonspor after the Italian side could only draw 0-0 away at Apollon Limassol. Trabzonspor, who eased to a 2-0 win at home over Legia Warsaw, have seven points to Lazio's five.

A second-half goal from Clement Grenier handed Olympique Lyon their first Group I win after two draws, the French side edging Rijeka 1-0 to move on to five points, along with Real Betis who beat Vitoria Guimares by the same scoreline.

An extraordinary match in Salonika saw hosts PAOK concede twice in the first 21 minutes, miss two penalties with Miroslav Stoch wasting both and still run out 3-2 winners to take control of Group L.

Haifa were 2-0 up through Dino Ndlovu and Eyal Golasa before Miguel Vitor pulled one back.

Stoch had his first spot-kick saved by Bojan Saranov before atoning by setting up Sotiris Ninis to level.

Slovakian international Stoch then had another penalty saved by Saranov just before halftime but his blushes were spared when Dimitros Salpingidis volleyed in the winner at the near post on 66 minutes.

Eintracht, 2-0 winners at home to Maccabi Tel Aviv, hold a five-point lead in Group F while Bulgarian champions Ludogorets won 1-0 at Chernomorets Odessa to lead PSV Eindhoven by five points in Group B.

© Copyright 2021 Reuters Limited. All rights reserved. Republication or redistribution of Reuters content, including by framing or similar means, is expressly prohibited without the prior written consent of Reuters. Reuters shall not be liable for any errors or delays in the content, or for any actions taken in reliance thereon.
Related News: Jermain Defoe, Salzburg, Europa League, Miroslav Stoch, UEFA
SHARE THIS STORYCOMMENT
Print this article 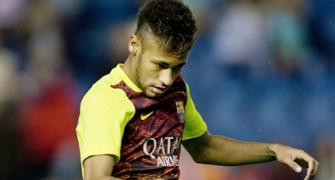 PHOTOS: Barca, Atletico stumble and miss out on record 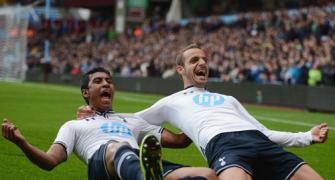 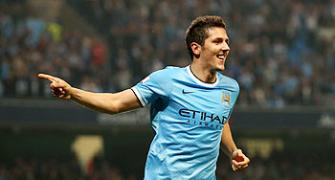 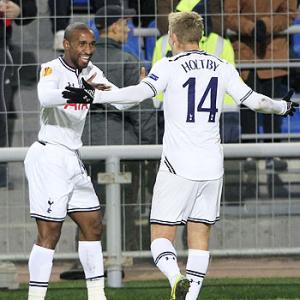 'Don't put too much pressure on Bale... leave him alone'