Europa League: Arsenal lose and go through, Napoli win but out 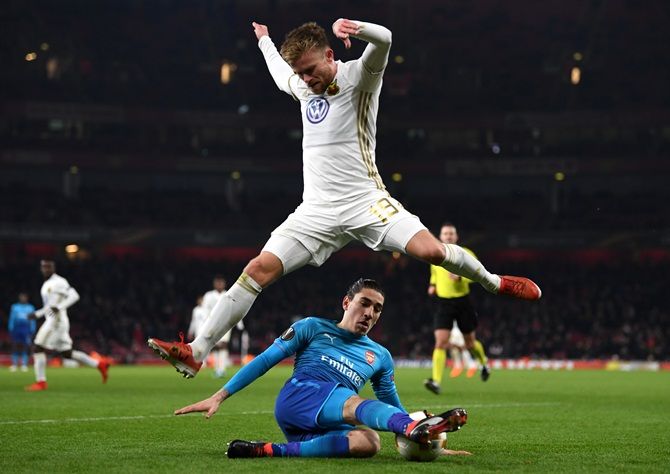 IMAGE: Ostersunds FK's Dennis Widgren evades a challenge by Arsenal's Hector Bellerin during their UEFA Europa League Round of 32 match at the Emirates Stadium in London on Thursday. Photograph: Michael Regan/Getty Images

Napoli came agonisingly close to pulling off a dramatic Europa League comeback when they won 2-0 at RB Leipzig but went out on away goals at the last 32 stage on Thursday while Arsenal got through despite an embarrassing 2-1 home defeat by Ostersund.

Borussia Dortmund snatched a late goal at Atalanta to progress with a 1-1 draw, while AC Milan and Atletico Madrid, both with three-goal leads from the away legs, completed the formality of qualifying with 1-0 wins at home on Thursday.

The evening was marred by the death of a policeman in Bilbao after rivals fans fought in the streets before the match between local side Athletic and Spartak Moscow, won 2-1 by the Russian team who still went out 4-3 on aggregate.

Arsenal had a three-goal lead from last week's win in Sweden but were rattled when Hosam Aiesh and Ken Sema scored twice in two minutes for Ostersund midway through the first half.

The North London side were spared further humiliation, though, after Ronald Mukiibi miscued when trying to clear a cross and defender Sead Kolasinac thumped the ball into the net from close range two minutes into the second half.

Napoli lost 3-1 in last week's first leg against Leipzig with a performance that embarrassed coach Maurizio Sarri, though he has emphasised that winning Serie A is the priority.

They restored some pride in the return as Piotr Zielinski scored from a rebound in the 33rd minute and Lorenzo Insigne turned in Jose Callejon's cross with five minutes to go.

That set up a rousing finale and Callejon could even have won the tie in stoppage time but his shot sailed over.

Atalanta scored against Dortmund when Rafael Toloi prodded the ball home at the far post after Mattia Caldara flicked on a corner in the 11th minute to make it 3-3 on aggregate.

There were then chances at both ends until Dortmund's Marcel Schmelzer snapped up the rebound, after Etrit Berisha failed to hold a Marco Reus shot, to put the Bundesliga side through.

Lazio striker Ciro Immobile got a hat-trick in a 5-1 win over FCSB, formerly Steaua Bucharest, after a 1-0 first-leg loss.

"We dominated the game. We didn’t concede any chances until the 70th minute," said Zenit coach Roberto Mancini after a match which kicked off in a temperature of minus 13 Celsius.

"After 70 minutes we tired a bit but this is normal, but in the end we deserved to win."

Atletico Madrid, leading 4-1 from the first leg, completed their tie at home to FC Copenhagen when Kevin Gameiro's early goal gave them a 1-0 victory and AC Milan beat Ludogorets by the same score with a Fabio Borini goal for a 4-0 aggregate win.

Dynamo Kiev, Sporting, Viktoria Plzen, Olympique Lyonnais, Olympique Marseille and Salzburg also qualified and will go into the hat for the last 16 draw which will be made on Friday.