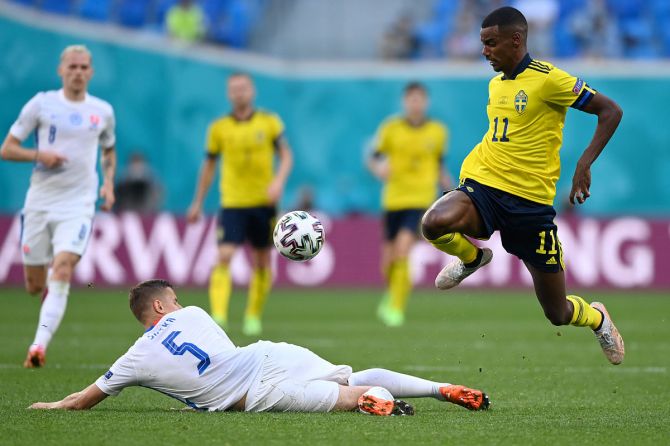 He may not have been involved in the penalty that Emil Forsberg scored as Sweden beat Slovakia 1-0 in their Euro 2020 Group E clash on Friday, but the name of Alexander Isak was on everyone's lips as the Swedes went to the top of their group.

After a drab first half, the 21-year-old Real Sociedad striker exploded into life in the second, bamboozling the Slovak defence with mazy dribbles and sharp changes of direction that reminded Swedish fans of a young Zlatan Ibrahimovic.

"It feels great. I said before the tournament I've tried to explain how it feels to represent Sweden, and I was wrong - this is a whole different feeling," he told broadcaster SVT.

"To play the Euros in these arenas and to do it for Sweden, it's an unbelievable feeling, and I'm so happy that we managed to take three points from this game."

The Swedes won few fans with a defensive performance in their scoreless draw with Spain on Monday, and the opening 45 minutes against Slovakia offered more of the same until Isak restored their pride with some moments of brilliance.

He fired a header just over the bar, then went on an incredible dribble from the halfway line that almost resulted in a goal as the Swedes finally started to find the cracks in the Slovak defence. 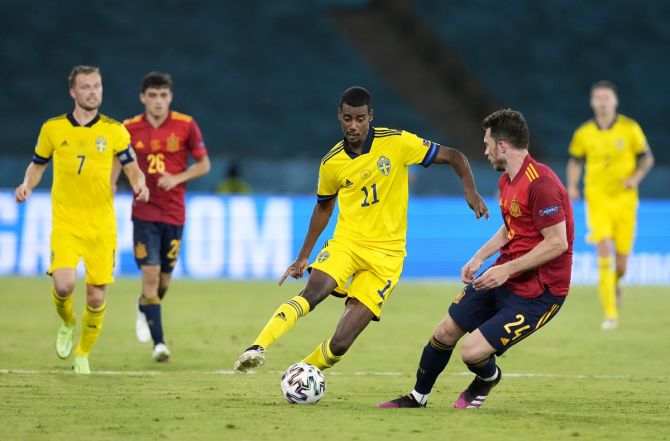 IMAGE: Sweden's Alexander Isak makes a good run down the middle during the Euro 2020 Group E match against Spain, at the La Cartuja stadium in Seville. Photograph: Thanassis Stavrakis/Getty Images

Another mazy run ended in a shot that failed to find the back of the net as unmarked strike partner Robin Quaison threw out his arms in frustration that Isak didn't pass to him. But harmony was restored when Quaison won the penalty that decided the game.

"In the first half it was more to receive the ball, pass it off to a team mate, in the second it was a bit more open, and I could attack and create a number of chances. I think everyone knows what the one thing that was missing today was," Isak explained.

Coach Janne Andersson was full of praise for his young striker, promising that the best was yet to come.

"Fantastic. I've said before that he's not the finished product as a player yet, he has a wholeness that is incredibly attractive. With the margins on his side he would have scored, but they will come," Andersson said.

The win puts Sweden top of the group with four points before their final game against Poland, who face Spain on Saturday.

"It'll be fun. We've had a great start to the tournament, it's about charging the batteries as well as possible and doing our best against Poland," Isak said.