Three-time European champions Germany are keen to notch their ninth win in as many Euro 2012 qualifiers when they take on Turkey on Friday as they seek to become the first German team to go through a qualifying campaign without dropping a point.

Despite already qualifying for next year's tournament as Group A winners with 24 points from eight games, Germany are not prepared to take their foot off the gas in their remaining two fixtures against Turkey and then Belgium on October 11. 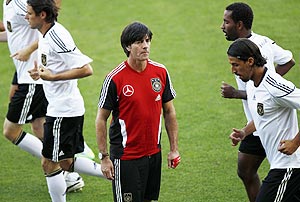 "We want to go through this campaign undefeated and will try to win the remaining two games," coach Joachim Loew said. "We want to set an historic milestone with ten wins out of as many games."

Loew said he would not experiment with his team and his line-up would remain largely unchanged from the previous qualifiers, also because there was still a lot at stake for both Belgium, in third place, and second-placed Turkey.

"Especially the game against Turkey (in Istanbul) will be marked by a lot of emotions. The fans will do everything to stand behind their team as an extra player," he said.

"I will most certainly not make seven or eight changes to positions as I did (in a friendly game) against Poland for example," Loew added.

With the only major absence being midfielder Toni Kroos, Loew's sole concern is likely to be who starts in attack.

Mario Gomez seems to have gained an edge over Miroslav following a top-scoring last season and spectacular start to the new campaign with Bayern Munich.

However, Klose has battled back in recent weeks, scoring regularly for new club Lazio and saying he was not afraid of the challenge his former Bayern teammate presented.

Turkey coach Guus Hiddink said his team had their fate in their own hands.

"We said we wanted to be in control. We can see this continuing as we reach the end of the qualifying stage. We are in control and we are continuing on our way," Hiddink said.

Turkey are second on 14 points, two ahead of Belgium, who host bottom-placed Kazakhstan and any slip-up against Germany could prove costly.

"We have to accept that this is going to be a very difficult match. I don't think that I'm a pessimist but we need to know that our job will be hard when playing teams like these. We need to face the realities," Hiddink said.

Fenerbahce defender Gokhan Gonul said Turkey wanted to get at least a draw against the Germans and win their final qualifier at home against Azerbaijan on October 11 when Belgium travel to Germany.

"We know that at the very least we need to get four points from two games. We know Germany's strength. They are undefeated. Their whole squad is here. We know it is going to be difficult but it is also not impossible," he said.