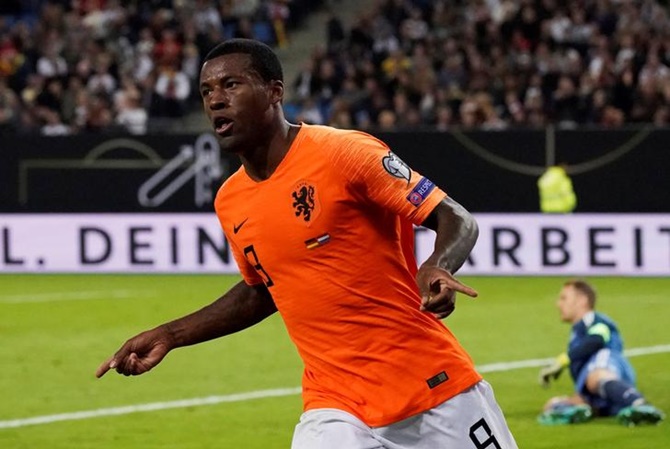 The Netherlands scored four times in 32 second-half minutes to secure a remarkable 4-2 comeback victory against hosts Germany in their Euro 2020 Group C qualifier on Friday.

Goals from Frenkie de Jong, a Jonathan Tah own goal, Donyell Malen and Georginio Wijnaldum wrapped up the win after Serge Gnabry had given the hosts an early lead and Toni Kroos had pulled them level at 2-2 with a controversial penalty.

The result leaves Germany on nine points from four games, three behind leaders Northern Ireland, who they face on Monday in Belfast.

The Netherlands move to six points from three games and next face bottom side Estonia.

It was a winning return to Hamburg for Dutch coach Ronald Koeman, who won in the port city against the Germans as a player during Euro' 88, and a clear mark of his team's improvement after they failed to reach the last two major tournaments.

"I told my players (at half-time) to stay in the game, not to give them so much space, control the ball better," Koeman told reporters. "That we should just keep going and we would get our chances. In the second half the Germans looked more tired and we benefited from that."

"Overall we worked harder than Germany for this victory," he said.

Joachim Loew's Germany side, undergoing their own overhaul after a disappointing 2018 World Cup first round exit and Nations League relegation, got off to a good start with Gnabry scoring on the rebound in the ninth minute.

There was little to be seen in terms of attacks from the Netherlands but that changed after the break.

They turned the game around within seven minutes, first scoring through De Jong in the 59th and then taking the lead courtesy of Tah's unfortunate own goal.

The Germans, missing several injured players, including Leroy Sane and Leon Goretzka, were struggling with the Dutch pace down the wings and were lucky to level with a 73rd minute Kroos penalty after Matthijs de Ligt accidentally handled.

There is no video replay for referees in the qualifiers.

The visitors got revenge for their 3-2 loss in Amsterdam in March, striking through debutant Malen in the 79th after a quick combination left the German defence frozen.

"We played below our skill level and abilities," Loew told reporters. "The Dutch were the better team and we deserved to lose. We went ahead but I never had the feeling that we were in control of the game.

"The Dutch kept pressing and then we ended up playing high balls. That is not how we had planned to play. We will now need to analyse this game and draw our conclusions,"

Belarus earned a stoppage time 2-1 win at Estonia to claim their first points in the other game in the group on Friday. 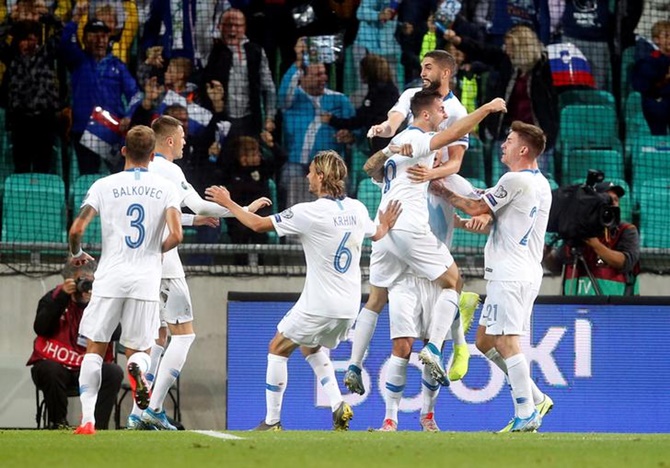 Slovenia ended Poland's 100 percent record in the Euro 2020 qualifiers when goals from Aljaz Struna and Andraz Sporar gave them a shock 2-0 win over the Group G leaders on Friday.

Poland had not even conceded a goal in the section heading into the game but their defensive wall was finally breached in the 35th minute, just as they seemed to be taking control.

Sporar flicked on Josip Ilicic's corner and Struna stuck out a leg at the far post to divert the ball past Lukasz Fabianski.

The Poland keeper did well shortly afterwards to turn away Benjamin Verbic's back-flick as Slovenia, who had won only one of their previous 12 competitive games, continued to press.

Striker Robert Lewandowski made a record 107th appearance for Poland, although this was later equalled by Jakub Blaszczykowski when he came on in the 70th minute.

Slovenia had doubled their lead five minutes before that with a breakaway goal after with a throw-in in their own half.

The hosts moved the ball quickly upfield and Sporar ran onto Ilicic's pass, outpaced the Polish defence and beat Fabianski from a tight angle.

Poland are top with 12 points from five games, three ahead of Austria who thumped Latvia 6-0, while Slovenia are a further point behind in third. The top two teams qualify for Euro 2020. 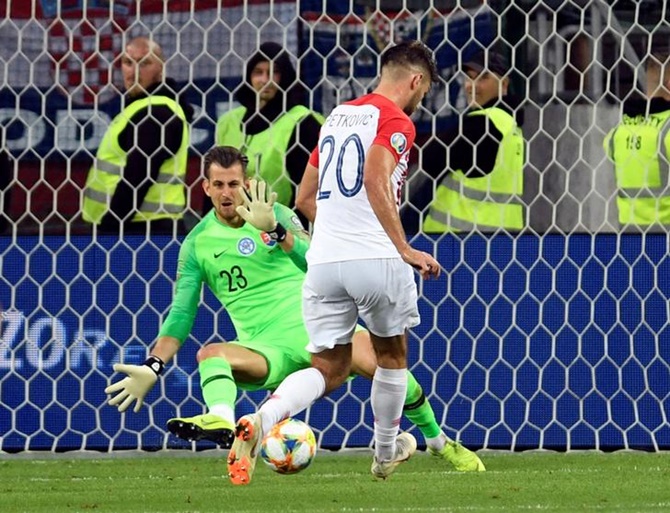 World Cup runners-up Croatia stayed on course to qualify for Euro 2020 after a dominant display gave them a 4-0 Group E win in Slovakia while Wales kept alive their own hopes after a 2-1 home victory over Azerbaijan on Friday.

Croatia are level with Hungary at the top of a tight group with both teams on nine points from four games, three ahead of Wales and Slovakia. Azerbaijan have no points.

The Croatians hit the woodwork three times in the first half in Trnava and Slovakia keeper Martin Dubravka pulled off several good saves before Nikola Vlasic fired the visitors ahead in the 45th minute with his first international goal.

The midfielder took the ball in his stride and fired a stinging low shot past Dubravka from 20 metres after the home side had survived a fierce Croatian onslaught, with Domagoj Vida blazing a shot over the bar from four metres.

Ivan Perisic, who hit the crossbar and the post in the first half, made it 2-0 less than a minute after the break when his heavily-deflected shot from 25 metres left Dubravka stranded.

Striker Bruno Petkovic added the third with a simple close-range finish after a flowing move as Croatia kept their feet on the pedal while Slovakia could only muster a pair of shots from Robert Mak at the other end.

Defender Dejan Lovren put the icing on the cake for Croatia with a diving header from a tight angle in the 89th minute.

A bizarre Pavlo Pashayev own goal fired Wales ahead in the 26th minute as Gareth Bale's deflected shot looped into the air and went in off the defender's shoulder with keeper Salahat Agayev coming off his line to smother the ball.

Mahir Emreli silenced the home crowd in Cardiff when he capitalised on Neil Taylor's blunder and beat Wayne Hennessey at the second attempt, slamming in the rebound after the Wales keeper parried his initial effort.

But the Welsh had the last laugh as Bale beat Agayev with a looping header in the 84th minute after a deflected Joe Allen effort fell kindly into his path.

Russia hit back to beat Scotland 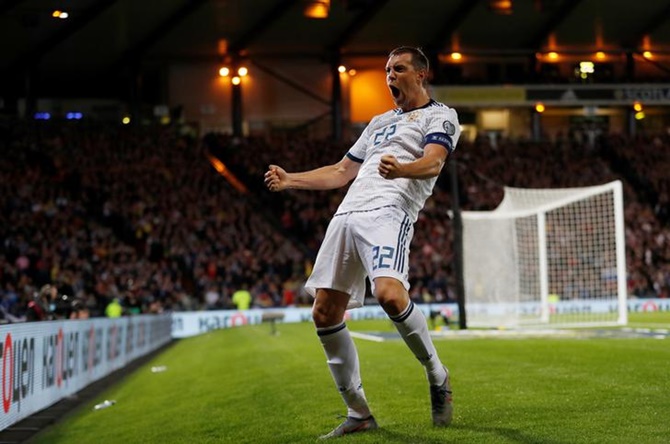 Russia recovered from conceding an early goal to beat Scotland 2-1 away in their Euro 2020 Group I qualifier.

John McGinn raised Scottish hopes by knocking in a loose ball for his first international goal after 11 minutes but Russia fought their way back into the game and Artem Dzyuba equalised five minutes before halftime.

Scotland repeatedly lost possession and were made to pay in the 59th minute when another pass was intercepted, Aleksandr Golovin sped away and cut the ball back into the middle where Stephen O'Donnell turned it into his own net.

Russia twice hit the woodwork as they continued to catch Scotland on the break.

Russia, who have 12 points from five games, stayed second, three points behind Belgium who maintained their 100 percent record with a 4-0 win in San Marino. Scotland stay on six.

Michy Batshuayi put Belgium ahead with a penalty two minutes before halftime and Dries Mertens, Nacer Chadli and Batshuayi added further goals in the second half.

Cyprus and third-placed Kazakhstan drew 1-1 in the group's other game, leaving them on four and seven points respectively. 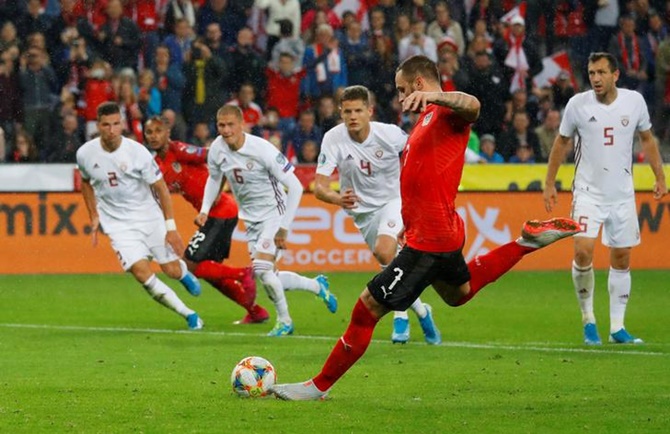 Austria forward Marko Arnautovic scored twice as his side, helped by some dreadful defending, routed hapless Latvia 6-0 in their Euro 2020 Group G qualifier on Friday to revive their hopes of qualifying for the finals.

Bottom side Latvia, without a win in their previous 10 competitive games, were quickly in trouble as Boriss Bogdaskins lost the ball on the edge of his own area following a goal kick and Arnautovic fired home in the seventh minute.

Marcel Sabitzer added a second six minutes later with a dipping, swerving long-range shot and Arnautovic converted a penalty early in the second half to make it 3-0.

Austria's fourth was bizarre as substitute Stefan Ilsanker's header hit the post and rebounded to goalkeeper Pavels Steinbors who fumbled the ball which bounced off his leg into the net.

Konrad Laimer and Michael Gregoritsch added two more as Austria moved up to second place, three points behind leaders Poland, who lost 2-0 away to Slovenia, while Latvia slumped to their fifth straight defeat in the group.

© Copyright 2020 Reuters Limited. All rights reserved. Republication or redistribution of Reuters content, including by framing or similar means, is expressly prohibited without the prior written consent of Reuters. Reuters shall not be liable for any errors or delays in the content, or for any actions taken in reliance thereon.
Related News: Andraz Sporar, Georginio Wijnaldum, Poland, Slovenia, Germany
SHARE THIS STORYCOMMENT
Print this article Dhawan, Samson steer India A past South Africa A