Cristiano Ronaldo's powerful header 11 minutes from time sent Portugal into the Euro 2012 semi-finals with a deserved 1-0 victory over the Czech Republic on Thursday.

The world's most expensive played hit the woodwork twice on an initially frustrating evening but crowned Portugal's dominant second-half performance with his third goal of the tournament, nodding a right-wing Joao Moutinho cross into the net.

It was an impressive display from the Portuguese who were appearing in their fifth European Championship quarter-final in a row and will play Spain or France in the last four.

The Czechs made a lively start inspired by the clever prompting of Petr Jiracek and Portugal took time to settle. 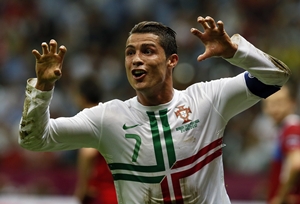 Their simple game plan was based around getting the ball to captain Ronaldo at every opportunity and he openly vented his frustration when his team mates failed to pick him out.

Ronaldo failed to connect properly with an overhead kick to the delight of the Czech fans, smashed a 35-metre free kick well wide and just before halftime struck the post following a brilliant turn and firm shot.

Portugal's Nani and Miguel Veloso were booked as tempers frayed and they suffered another blow when striker Helder Postiga was carried off injured just before halftime and replaced by Hugo Almeida.

Almeida missed a great chance to open the scoring 19 minutes into the second half when he wastefully headed Raul Meireles's perfect cross over the bar.

Another long-range Ronaldo free kick grazed the outside of the post and the Real Madrid forward then lashed a half-volley over the bar.

Portugal were dominating and Nani forced Petr Cech into a sprawling save before Almeida was adjudged offside when he nodded Nani's cross into the net.

The Czechs earned a brief respite following a brilliant surging run down the left by Vaclav Pilar but Portugal hit back when Joao Moutinho's swerving drive was tipped over by Cech and Nani's shot was saved after good work by Meireles.

The match appeared to be drifting towards extra time when Portugal picked another hole on the left side of the Czech defence and Ronaldo stole in to provide an emphatic finish by heading the ball into the ground with the bounce taking it high into the net beyond Cech.

© Copyright 2022 Reuters Limited. All rights reserved. Republication or redistribution of Reuters content, including by framing or similar means, is expressly prohibited without the prior written consent of Reuters. Reuters shall not be liable for any errors or delays in the content, or for any actions taken in reliance thereon.
Related News: Cristiano Ronaldo, Portugal, Hugo Almeida, Nani, Joao Moutinho
COMMENT
Print this article 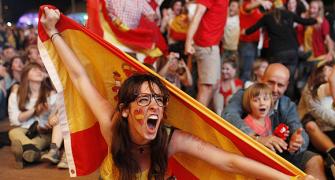 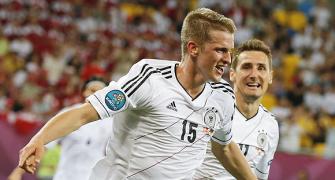 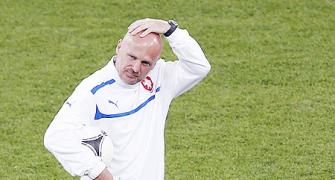