Harry Kane scored a first half hat-trick as England booked their place in the finals of Euro 2020 as group winners with a crushing 7-0 victory over Montenegro at Wembley Stadium on Thursday.

England lead Group A on 18 points with one game remaining and can now look forward to next year's tournament in which the semi-finals and final will be played at Wembley.

Montenegro, level on three points with Bulgaria at the bottom of the table, offered no examination of the credentials of Gareth Southgate's side for the tournament, which begins in June, but England's total of 33 goals from seven games certainly shows the potency of their attack.

Southgate again put his faith in youth, with the starting line-up's average age of 23 years and 255 days, the youngest Three Lions side since 1959.

As expected, Manchester City's Raheem Sterling was left out by Southgate as punishment for his role in an altercation with Liverpool's Joe Gomez at England's training camp on Monday. Gomez was booed by some fans at Wembley when he entered came on as a substitute.

But even without Sterling, England have no shortage of options in attack with Jadon Sancho and Marcus Rashford lining up alongside Kane in a three-pronged attack. Alex Oxlade-Chamberlain, whose progress with the national team has been hampered by injury, put England ahead in the 11th minute, drilling into the bottom corner after left back Ben Chilwell found him with a clever chip over the defence.

Leicester City's Chilwell created the second seven minutes later with a free kick that picked out Kane, who smartly glanced home a header.

The same pair combined for the third with Kane losing his marker to head in a corner from Chilwell.

Kane wrapped up his hat-trick in the 37th minute, with a sharp turn and shot into the bottom corner as England went into the break 5-0 up.

Mason Mount had a goal disallowed for offside but an own goal from Aleksandar Sofranac made it six after a scramble in the box.

Substitute Tammy Abraham grabbed his first England goal, six minutes from the end, sliding in at the near post to convert a low cross from Sancho. Portugal captain Cristiano Ronaldo scored another treble, moving closer to 100 international goals, as he led the European champions to a 6-0 drubbing of Lithuania.

Ronaldo, whose hat-trick was the 55th of his career and ninth for Portugal, has 98 goals and could become only the second player to score a century for his country after Iran's Ali Daei.

Pizzi, Goncalo Paciencia and Bernardo Silva shared the other goals in the one-sided Group B match.

The European champions, however, were left waiting to secure a place at the finals after Serbia beat Luxembourg 3-2.

Portugal are in second place with 14 points, one ahead of Serbia, and will qualify if they win in Luxembourg on Sunday. Leaders Ukraine have already qualified.

Ronaldo showed no sign of the knee problem which led to him being substituted in his last two games for Juventus -- prompting an angry reaction on the second occasion -- and could easily have reached a century of goals on Thursday.

He was quick off the mark, winning and converting a penalty in the seventh minute.

The 34-year-old got to the ball ahead of Saulius Mikoliunas, who clipped his heel, and sent his spot kick down the middle, hitting goalkeeper Ernestas Setkus' foot on the way in.

Lithuania paid for more sloppiness 15 minutes later as they lost the ball in midfield and Paciencia slipped the ball quickly to Ronaldo, who produced a wicked, dipping first-time shot which flew past the bemused Setkus from 25 metres.

He had another shot on the turn saved by Setkus and blasted over after bursting into the box before the break.

Pizzi, Paciencia and Silva scored in an 11-minute spell after halftime and Ronaldo sent two efforts agonisingly wide as the siege continued.

He completed his hat-trick from Silva's pass in the 65th minute before Paciencia set him up nicely for a fourth but Ronaldo fired the easy chance over the bar. Serbia kept alive their hopes of reaching next year's European Championship after a first-half brace from Aleksandar Mitrovic helped them scramble a 3-2 home win over Luxembourg in Group B.

The result left Serbia third in the group on 13 points from seven games. They are one point behind holders Portugal who romped to a 6-0 home rout of Lithuania and six adrift of already qualified Ukraine.

In order to advance, the Serbians must beat Ukraine at home in their final game and hope Portugal fail to win in Luxembourg on Sunday. Should they fail, Serbia could still qualify via the Nations League playoffs in March.

Fulham striker Mitrovic headed Serbia into an 11th-minute lead and made it 2-0 with a spectacular shot into the top corner in the 43rd, with the home side missing several chances in a lively first half.

Nemanja Radonjic restored Serbia's two-goal advantage with a piledriver from 20 metres after Gerson Rodrigues had pulled one back, but the home side endured a nervy finish as David Turpel headed Luxembourg's second in the 75th minute.

Mitrovic missed a late chance to grab a hat-trick when he hit the post from close range. 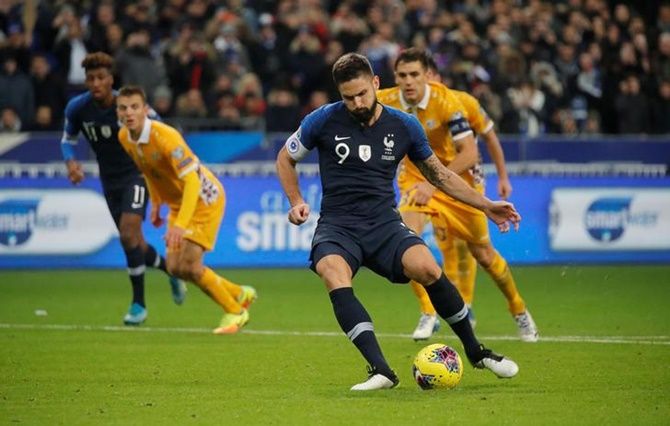 France's efforts to celebrate their qualification for Euro 2020 were almost spoiled by Moldova, with an Olivier Giroud penalty sparing their blushes as they came from behind to win 2-1 and go top of Group H.

Turkey's scoreless draw with Iceland earlier in the evening ensured they and World champions France would qualify from the group, but the Moldovans were intent on spoiling the French party.

The visitors took the lead in the ninth minute when France defender Clement Lenglet followed up a bad defensive header with an even worse one, giving Moldovan striker Vadim Rata the chance to poke the ball home.

France equalised in controversial circumstances in the 35th minute as Giroud contested with Moldova keeper Alexei Cosele for a free kick lifted into the box, forcing Cosele to spill the ball for Raphael Varane to head into an empty net.

The Moldova players protested vehemently that their keeper was fouled by Giroud, but Lithuanian referee Gediminas Mazeika waved away the protests and allowed the goal to stand.

Despite the glittering array of attacking players at their disposal, France struggled to break down the dogged Moldovans, and it took a 79th-minute Giroud penalty for a foul on Lucas Digne to secure the three points.

Elsewhere in the group, Albania had to come from behind to grab a 2-2 draw at home to Andorra.

Bekim Balaj put Albania ahead with a header only six minutes into the game. In the 18th minute, Andorra tied the score with a goal by the midfielder Cristian Martinez.

They then forged ahead through Martinez in the 48th minute, but Rey Manaj levelled the score in the 56th minute following an assist from midfielder Odise Roshi.

France, who travel to Albania for their final game, top Group H on 22 points, two ahead of Turkey, who host Andorra to round off their qualifying campaign.

Turkey qualify with draw against Iceland Turkey qualified for the Euro 2020 finals with a goalless draw in a Group H against Iceland, the result also ensuring France a place in the championships.

They join Belgium, Italy, Poland, Russia, Spain and Ukraine as the teams who have already qualified for the tournament that will be staged across 12 European countries from 12 June to 12 July 2020.

Both teams struggled to make an impact with Turkey striker Burak Yilmaz failing to find a way past Iceland keeper Hannes Halldorsson.

The hosts pressed harder in the second half but Iceland's defence kept them from scoring.

Midfielder Ozan Tufan came close to scoring in the 63rd minute but his effort brushed past the crossbar.

Iceland also missed a chance to score in the closing stages when Hordur Magnusson's header was blocked by Turkey defender Merih Demiral on the line. The Czech Republic punched their ticket to Euro 2020 by coming from behind to beat Kosovo 2-1 as Alex Kral scored one goal and set up another to give the hosts second spot in Group A.

The Czechs dominated possession but failed to convert their chances in the first half before falling behind when striker Atdhe Nuhiu scored against the run of play in the 50th minute.

But the home side roared back and levelled in the 71st minute when midfielder Kral pounced on a loose ball and unleashed a fierce strike that gave the Kosovo keeper no chance.

The goal energised the Czechs who hit the woodwork twice in quick succession before 21-year-old Kral directed a header towards Ondrej Celustka who guided the ball home in the 79th.

"It's awesome," Kral said. "We worked to qualify and it's done. We reacted well to the Kosovo goal and now we're through."

The Czechs, who play Bulgaria on Sunday, have 15 points and will finish second in the group behind England, who have 18 after thrashing Montenegro 7-0 at Wembley to secure runners-up spot.

© Copyright 2023 Reuters Limited. All rights reserved. Republication or redistribution of Reuters content, including by framing or similar means, is expressly prohibited without the prior written consent of Reuters. Reuters shall not be liable for any errors or delays in the content, or for any actions taken in reliance thereon.
Related News: Olivier Giroud, Cristiano Ronaldo, Harry Kane, England, Ben Chilwell
COMMENT
Print this article 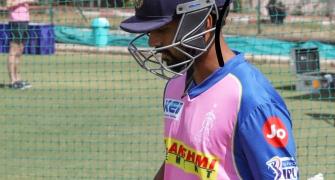 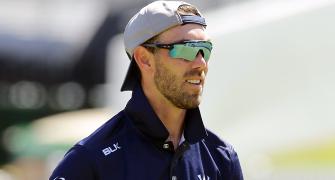