Portugal must target Hungary win while being wary of full crowd 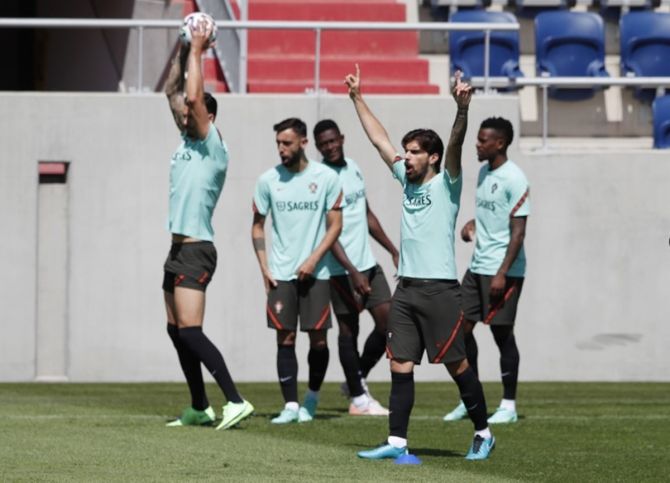 Portugal will look to their Euro 2020 opener with Hungary to get a head start on Germany and France in a bruising Group F but the holders will have to overcome a wall of noise made by 67,000 locals to make a statement of intent.

Hungary, playing in only their second European Championship in 49 years, are rank outsiders in the tournament's toughest group but will compensate for what they lack in star names with passion and grit.

The shiny new Puskas Arena is the only Euro 2020 stadium which will be at full capacity after local authorities agreed to exchange social distancing for a strict entry policy, requiring fans to return a negative COVID-19 test to gain access.

It means the likes of Cristiano Ronaldo and Bruno Fernandes face the prospect of their every touch being booed in Tuesday's fixture by the Budapest crowd, who will not forgive any slacking off from their side.

"They (Hungary) are a very tough team and won't let any ball go and will never give up," said Portugal midfielder Danilo.

"We know what style of play to expect from them and we'll be preparing well over the next few days to make sure we're not in for a surprise."

"We spent a season without playing in front of fans and we're not used to it anymore but having a crowd will make the game more exciting. Hungary will be extra motivated but it's just another problem we'll have to deal with."

Leaving aside the partisan crowd, Portugal are likely to face tougher tests from Germany and France and the fixture is a golden chance to clock up some early goals and points to help their push to qualify from the group.

Portugal did face a torrid time from Hungary at Euro 2016, falling behind three times before coming back to earn a 3-3 draw and scrape into the knockout stages.

Fernando Santos' Portugal side are an even stronger proposition five years on, possessing an embarrassment of attacking riches with the likes of Diogo Jota, Andre Silva, Joao Felix and Fernandes as well as the ever-determined Ronaldo.

"This is a different group, we have many young players embarking on their first major international tournament although our ambition and hunger will be the same as in Euro 2016," added 29-year-old Danilo.

"The previous team was very cohesive as they had been playing together for a long time while we are a young team of emerging talents but we are also a united group. We all think the same and want to win."

Hungary, meanwhile, are a less potent side than the one which reached the knockout stage last time around, with big personalities such as Gabor Kiraly, Roland Juhasz and Zoltan Gera all moving on.

They are also without two key midfielders in bright young hope Dominik Szoboszlai and Zsolt Kalmar due to injury. 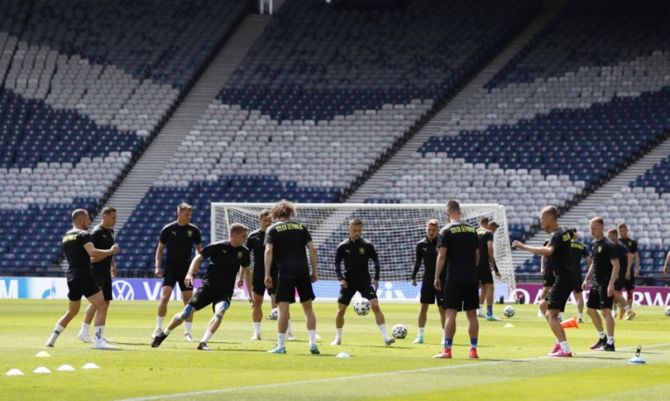 The Czech Republic will be eager to end a winless run stretching back to 2011 against Scotland when they take on Steve Clarke's side in their Euro 2020 opener on Monday, coach Jaroslav Silhavy said.

Over the past decade, the two teams have met four times and Scotland have emerged victorious on the last three occasions, including securing 2-1 and 1-0 wins in the UEFA Nations League last year. The other match, a Euro qualifier in 2011, ended in a draw.

Silhavy said the experience from those encounters will help the Czechs to start off on the right foot before facing Group D favourites Croatia and England.

"We hope the experience playing Scotland will be useful and we can finally beat them," Silhavy told a news conference on Sunday. "It is an important match to be sure and we will have more difficult games against opponents who are favourites."

The Czechs enter the tournament with the core of the Slavia Prague team that reached the Europa League quarter-finals, giving them the confidence to make a mark at the tournament.

Slavia Prague centre back Ondrej Kudela is serving a 10-match UEFA ban for "racist behaviour" during the club's Europa League last-16 match against Scottish champion Rangers, potentially adding a bit of spice to their Euro showdown.

But Silhavy said he expected no animosity to carry over onto the pitch, though he acknowledged Scotland had an edge with the 12,000 home fans who will roar them on in Hampden Park.

"We hope to put on a great show for the fans and we don't have any animosity against Scotland," Silhavy said.

"Scotland is the home side and it gives them an advantage. "The home crowd is hungry for football. It's going to be exciting and it's going to motivate the Scottish."

Silhavy also said aside from Werder Bremen goalkeeper Jiri Pavlenka -- who left the squad due to injury -- all players were fit.

Tomas Koubek will join the squad on Tuesday, while Tomas Vaclik is expected to start against Scotland.

The coach -- who will lead a team at a big tournament for the first time -- said he had his starting 11 in mind but could make a few changes following Sunday's training session.

"When you lose a player during the preparation, especially a goalkeeper, it's hard," Silhavy said. "I hope this is the last change we will have to make."