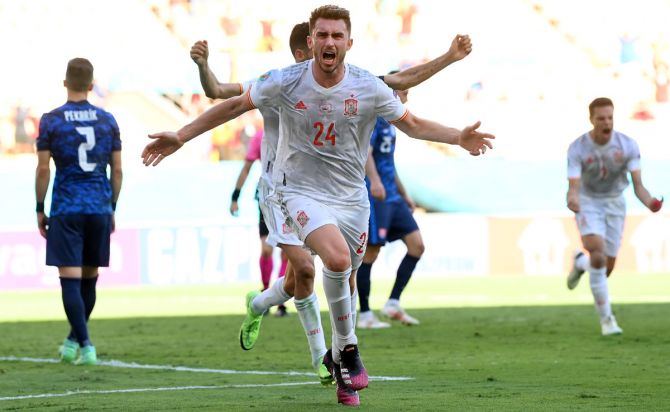 Spain crushed a hapless Slovakia 5-0 in their first Euro 2020 win on Wednesday, setting up a last-16 clash against Croatia, after being set on their way by a calamitous own-goal from keeper Martin Dubravka.

Aymeric Laporte headed in a second goal on the stroke of halftime before second-half goals from Pablo Sarabia, Ferran Torres and a Juraj Kucka own goal rounded off an emphatic win that saw them finish second in Group E on five points behind Sweden.

Luis Enrique's side will next meet Croatia in Copenhagen on Monday while Slovakia head home.

Dubravka had made a stunning save to keep out an Alvaro Morata penalty but gave Spain the lead on the half-hour mark when he palmed the ball into his own net after a Sarabia shot had cannoned off the crossbar and looped back towards goal.

The goal, which came about after a misplaced pass from Slovakia's shaky defence, eased any nerves Spain had of a shock exit after disappointing draws with Sweden and Poland, and they went on to record the biggest win of the tournament.

"This was just what we needed. We came flying out of the blocks, and when we play like that we're a very strong side," said Spain captain Sergio Busquets, who missed the first two games following a COVID-19 positive

"Today was a huge boost for everyone, for the players, the fans. I've had a really bad time, 10 days at home without knowing if I could return. But now whatever will be will be." 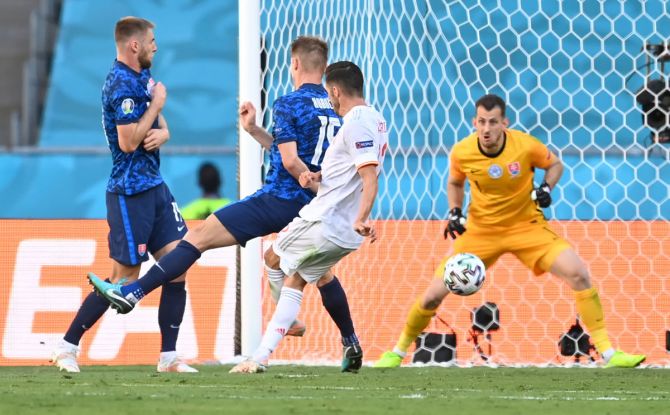 Cesar Azpilicueta had said ahead of the crunch game that it was "do or die" for Spain but coach Luis Enrique was more optimistic, likening his side to a bottle of champagne that was about to be uncorked.

"We needed a game like this to give our fans something to shout about and give ourselves some confidence," added Sarabia, who made his first start of the tournament and made the team more direct.

"We struggled at the start but we had a great first 20 minutes, playing with a brutal level of intensity."

Busquets returned as one of four changes, yet there was a familiar feeling as Spain squandered several early chances including the penalty, which was the fifth consecutive spot-kick they have failed to convert and followed Gerard Moreno's miss against Poland. It took Dubravka's moment of madness for the Spaniards to take the lead, but there was no letting up after that and after missing so many clear chances in all three games, practically every effort they had seemed to go in.

Laporte nodded home a Gerard Moreno cross following a corner right before halftime and the party continued after the interval when Sarabia calmly tucked in a Jordi Alba cross in the 56th minute.

Ferran added to the festive mood by scoring with a classy back heel immediately after coming off the bench, converting a cross from the electric Sarabia.

Fellow substitute Pau Torres almost scored moments after he came on when he stabbed the ball towards goal in a scrappy move, it trickling across the line after a scuffed clearance from Slovakia midfielder Kucka.

It sealed a miserable afternoon for Slovakia, who had hopes of getting into the knockout stages for the second time in their second appearance in a Euros but were overwhelmed by a Spain side that finally found their feet.

The performance delighted the Seville crowd at La Cartuja, who had booed their team off the pitch after the 1-1 draw with Poland but was chanting "Ole" in the closing stages and whooping out loud at their team's every touch.

© Copyright 2021 Reuters Limited. All rights reserved. Republication or redistribution of Reuters content, including by framing or similar means, is expressly prohibited without the prior written consent of Reuters. Reuters shall not be liable for any errors or delays in the content, or for any actions taken in reliance thereon.
Related News: Ferran Torres, Spain, Pablo Sarabia, Aymeric Laporte, Martin Dubravka
SHARE THIS STORYCOMMENT
Print this article 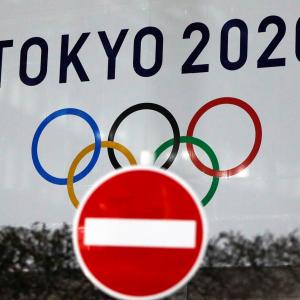