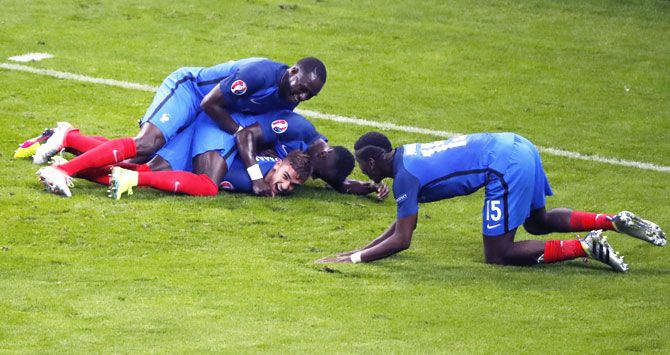 IMAGE: France players celebrate with Antoine Griezmann after scoring the fourth goal against Iceland during their Euro 2016 quarter-final match at Stade De France in Paris on Sunday. Photograph: Charles Platiau/Reuters

France decimated Iceland in a 5-2 win to end the Nordic nations Euro 2016 dream run in the quarter-final on Sunday.

Olivier Giroud (2), Paul Pogba, Dimitri Payet, Antoine Griezmann all netted for France as the hosts went into the break with a 4-0 lead.

Having fairly comfortably eased past England into the quarter-finals, Iceland, the smallest nation ever to have qualified for the European Championship, with a population of 330,000, were 4-0 down inside the first half. 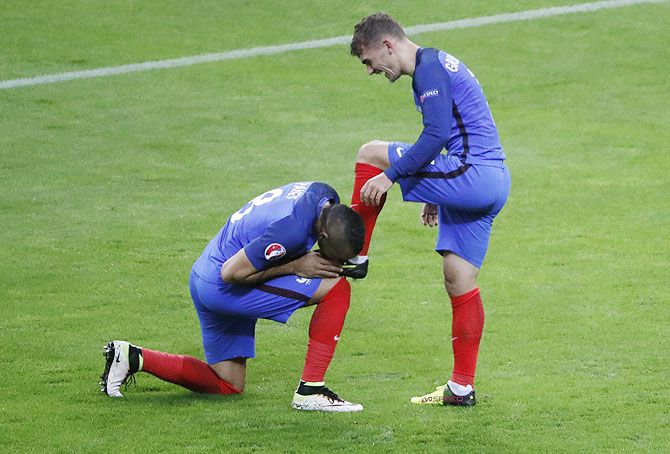 Paul Pogba headed the second in the 20th and France ended Iceland's hopes when Dimitri Payet and Antoine Griezmann scored twice in three minutes to put the hosts 4-0 ahead at halftime. 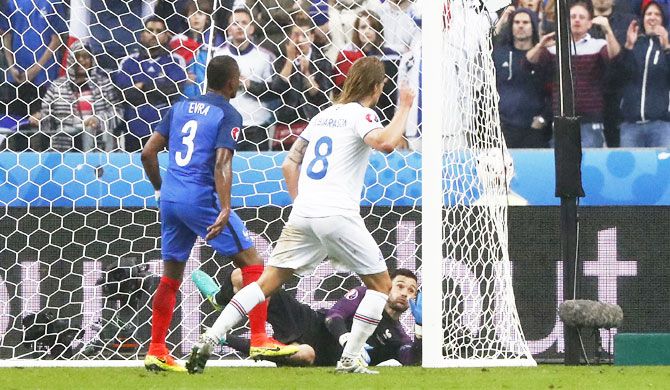 Iceland tried to rally after the break with a goal from Kolbeinn Sigthorsson, and added a late consolation through Birkir Bjarnason, but the damage had already been done.

France, who had not been past the quarter-finals since they won the tournament in 2000, eased off and cruised home.

Coming into the game, Iceland were praised for a rigidly well-organised defence while France had found first-half goals hard to come by, with their previous six coming after the break.

It was a matter of minutes, however, before both of those traits to be swept aside, as France set about picking their way through gaping holes in Iceland's previously solid rearguard.

Having defended so admirably against England, Iceland were 2-0 down inside 20 minutes through two of the oldest and simplest tricks in the football playbook.

The opener came after 12 minutes from a hopeful long ball which found Giroud with acres of space to run through and he drive a low finish beneath keeper Hannes Halldorsson. The second goal was a simple corner to the far post that the soaring Pogba headed emphatically home.

It seemed as though the contest was already effectively over when Payet turned the screw two minutes before halftime, sweeping home a low left-foot strike from the edge of the area for his third goal of the tournament.

Yet worse was to come for Iceland as Griezmann twisted the knife on the stroke of halftime, latching onto a through ball after Giroud's dummy to race clear and chip the advancing Halldorsson to become tournament top scorer with four goals.

There was a brief respite for Iceland as they clawed a goal back 11 minutes after the break when Kolbeinn Sigthorsson slid in at the near post to convert Gylfi Sigurdsson's low cross, but their raised spirits were swiftly doused. 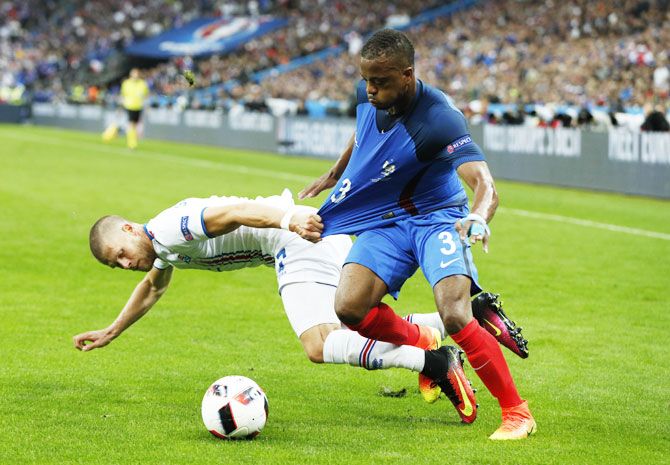 A simple lofted free kick from Payet three minutes later allowed Giroud to dart in front of the keeper and flick his header into the unguarded net.

With six minutes remaining, Bjarnason pulled another goal back for Iceland with a header but the tie, and Iceland's hopes of extending their dream run, were over as France looked forward to facing old rivals Germany in Marseille on Thursday.

Following his team's ouster, Iceland's veteran striker Eidur Gudjohnsen tweeted: "We lived the dream....but all dreams come to an end! #FRA were too strong for us tonight. We are very proud. It's been a fantastic tournament and something special for a small team."

France will next face Germany in the semi-final on Thursday, July 7.