The Australian weightlifter said his bicep had fallen down to his elbow only a week before the Gold Coast competition and he felt a 'click' when trying to lift 168kg on the clean and jerk. 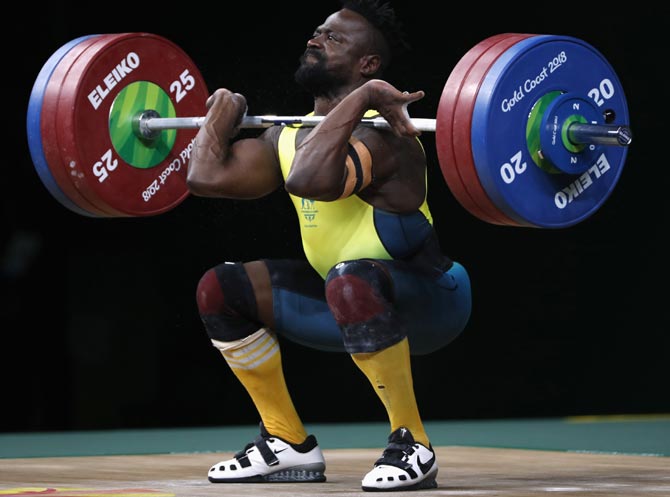 Australian weightlifter Francois Etoundi braved the agony of a torn bicep to clinch bronze in the 69kg division at the Commonwealth Games on Saturday, winning a measure of redemption four years after leaving Glasgow in shame.

Etoundi was fined and had his accreditation stripped after headbutting Welsh weightlifter Gareth Evans at the Glasgow athletes village in the wee hours of the morning, the incident overshadowing his bronze medal in the 77kg class.

On Saturday, the Cameroon-born 33-year-old re-tore his bicep when attempting a lift at the Carrara Sports and Leisure Centre but defied the pain for success on the next 169kg effort to win his second Commonwealth bronze with a combined weight of 305kg.

After dropping the bar, he collapsed onto the platform and later returned to collect his bronze with his left arm in a sling. Etoundi said his bicep had fallen down to his elbow only a week before the Gold Coast competition and he felt a 'click' when trying to lift 168kg on the clean and jerk.

"I didn't want to show the coaches how much I was hurting because I wanted to try 175kg on my last lift, but they were a little bit scared to let me," he said.

"This is my home crowd. I didn't want to disappoint them. I know that if I didn't have this injury, this would have been a gold medal for sure -- 100 per cent."

Etoundi said he hoped to reconcile with Evans, four years after breaking his nose. The Welshman grabbed gold in the 69kg division on Friday.

"I've seen him at a couple of competitions since Glasgow, including the Commonwealth Championships last year, but we never speak," added Etoundi.

"All the time when I've seen him I prefer to stay away because I don't want drama. But this is my home, so I want to make him feel welcome and move on.

© Copyright 2020 Reuters Limited. All rights reserved. Republication or redistribution of Reuters content, including by framing or similar means, is expressly prohibited without the prior written consent of Reuters. Reuters shall not be liable for any errors or delays in the content, or for any actions taken in reliance thereon.
Related News: Francois Etoundi, Gareth Evans, IMAGE, Paul, Kumar Sivalingam
SHARE THIS STORYCOMMENT
Print this article