The announcement was made during CBC Television's Sports Day in Canada broadcast from Kingston, Ontario.

Over 16 years as a member of Canada's national field hockey team, he has earned more than 300 caps, achieving that milestone at this year's Field Hockey World Cup. He is widely considered one of the best midfielders in the game and plays professionally in Holland in the world's top league. 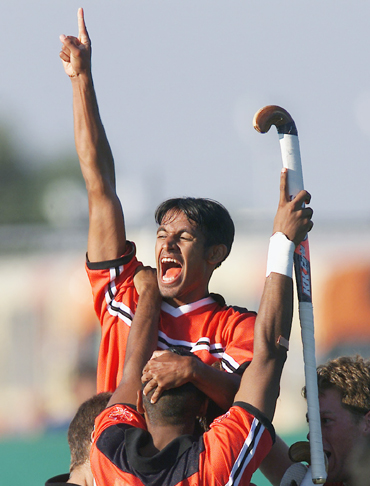 "Ken Pereira is an inspired choice as Flag Bearer for so many reasons," according to Team Canada Chef de Mission, Martha Deacon.

"Think about what he's accomplished ï¿½ three previous Commonwealth Games, two Olympic Games, four Pan Am Games, and two World Cups. He's highly respected both on and off the pitch and his leadership qualities are unquestioned. We're so proud that Ken will be carrying the Canadian flag into the Opening Ceremonies in Delhi on October 3rd."

Born in Toronto of Indian parents, Pereira is the first team sport athlete to be named as Canadian Flag Bearer for a Commonwealth Games.

He is also the first Indo-Canadian and the first field hockey player to receive the honour.

With characteristic modesty, Pereira says he "couldn't believe it" when informed that he'd been selected by Commonwealth Games Canada to carry the flag.

"I thought they'd called the wrong number," he jokes. "We have so many great athletes on the Canadian team that it's a very special honour to be selected to represent them all. I literally have goose bumps every time I think about walking into the main stadium in Delhi carrying the maple leaf."

The fact that these Games are being hosted in India adds even more meaning for Pereira.

"It's especially sweet because it's the birthplace of my parents. We still have a lot of family over there and I'm sure they'll come out and support the Canadian team!"

"Ken embodies all of the elements it takes to be a top international athlete: commitment, dedication and passion for his sport," adds Field Hockey Canada President, Mary Cicinelli. "He is a role model for young Canadian athletes and we are immensely proud of his success, on and off the playing field."

In Delhi, Pereira's Canadian squad will face South Africa, England, Trinidad & Tobago, and New Zealand in the pool round.