Manchester United scaled the Premier League summit for the first time this season after Robin van Persie scored against his old club Arsenal in a victory more comfortable than the 2-1 scoreline suggested on Saturday.

Van Persie's early effort and a second-half header from Patrice Evra saw United leapfrog Chelsea after the London side conceded a late equaliser in a 1-1 draw at Swansea City.

Victor Moses put Chelsea ahead just past the hour in south Wales but Pablo Hernandez grabbed a point in the 88th minute.

United are a point clear of the European champions with 24 from 10 games, while Manchester City missed the chance to move level on points at the top after drawing 0-0 at West Ham United.

Marouane Fellaini scored twice for Everton in a 2-2 draw at Fulham as they rose to fourth place with 17 points, ahead of Tottenham Hotspur on goal difference. 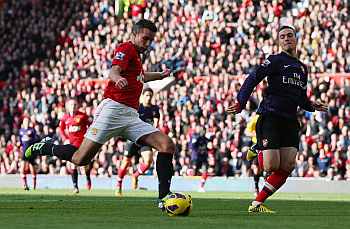 Andre Villas-Boas' Spurs side slipped to a surprise 1-0 home defeat by Wigan Athletic whose scorer Ben Watson was the first Englishman to net a league goal for the club this year.

Norwich City beat Stoke City 1-0 while Aston Villa achieved only their second win of the season, 1-0 at Sunderland.

After a controversial blood and thunder clash at Stamford Bridge last Sunday when United beat Chelsea 3-2 to end the west London team's unbeaten start to the league season they might have expected a similar battle at home to Arsenal.

They need not have worried, however, as the club they once regularly sparred with for silverware produced a listless performance that could have been more harshly punished.

United, who thrashed Arsenal 8-2 in the corresponding fixture last season, could even afford a missed penalty by Wayne Rooney on the stroke of halftime.

Santi Cazorla's well-taken consolation goal in stoppage time flattered the visitors who had midfielder Jack Wilshere sent off for a second booking after the break.

All the more galling for Arsenal was the sight of Van Persie scoring against them after eight years of banging in goals for the north London club who are losing touch in the title race.

The Dutchman, who joined United from Arsenal in August having scored 37 league goals last season, needed less than three minutes to score after a mistake by Thomas Vermaelen.

Van Persie rarely needs help finding the back of the net but central defender Vermaelen obliged when he made a hash of trying to clear a cross from Rafael and the ball fell to his former team mate who struck a first-time shot past Vito Mannone.

"A special day, in the end it was quite a game," Van Persie, who did not celebrate his eighth league goal since joining United, told Sky Sports.

"It speaks for itself (why I did not celebrate). I played eight years there and had a fantastic time. I wanted to respect the fans, the manager and the whole club."

Arsenal struggled to make any real impact and only Wilshere, making his second start since returning from a long injury lay-off, showed any bite in the opening period - earning a yellow card for a foul on fellow midfielder Tom Cleverly.

Moments before the break the hosts were awarded a penalty when Ashley Young's cross was blocked by the arm of Cazorla but Arsenal were spared as Rooney's penalty slithered wide.

Evra finally gave United breathing space when he headed in from close range after 67 minutes, two minutes before Wilshere was shown a second yellow card for a rash foul on the Frenchman.

United manager Alex Ferguson said he was surprised by the subdued nature of the visitors whose rather meek display was summed up by the unusual sight of Brazilian defender Andre Santos swapping shirts with Van Persie at halftime.

He was more concerned by his side's poor finishing.

"It was a strange game, and the chances we missed," he said. "We should have put the game to bed. If you see the scoreline you'd think it was a close game, but it wasn't.

Chelsea were just a few minutes away from a noteworthy victory at the end of a seven-day period that saw them lose to United in the league, beat them 5-4 in the League Cup and also find themselves embroiled in another racism storm.

Moses headed Chelsea in front after an hour but as heavy rain began to fall at the Liberty Stadium the visitors got pushed back and Hernandez beat Petr Cech to deny Roberto di Matteo's team victory.

"Mentally and physically it has been a demanding week," Di Matteo told Sky Sports. "The players responded and we nearly won the game. We defended well and they didn't create many chances although it was a quality goal they scored."

© Copyright 2023 Reuters Limited. All rights reserved. Republication or redistribution of Reuters content, including by framing or similar means, is expressly prohibited without the prior written consent of Reuters. Reuters shall not be liable for any errors or delays in the content, or for any actions taken in reliance thereon.
Related News: Chelsea, Van Persie, Arsenal, Man United, Manchester United
COMMENT
Print this article 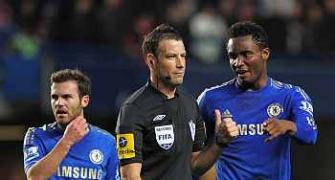 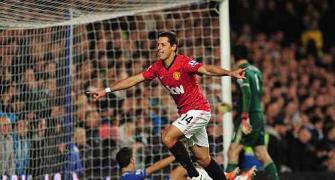 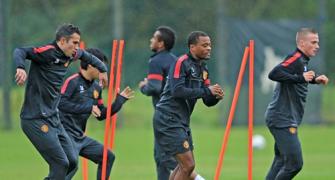 Goals may flow as United and Van Persie host Arsenal 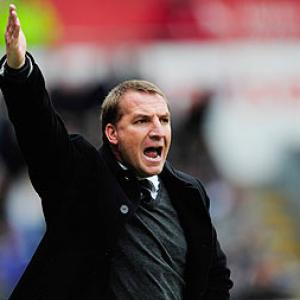 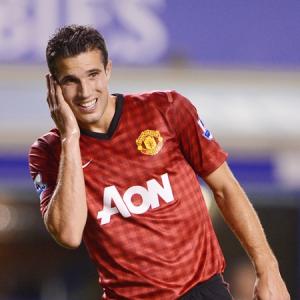