Manchester United will be without striker Danny Welbeck for their penultimate Premier League game at home to Swansea City on Sunday while defender Jonny Evans is a major doubt for a game the faltering champions cannot afford to lose. 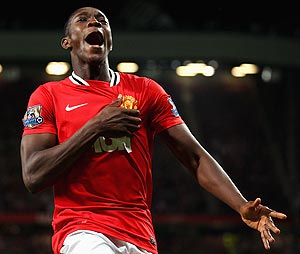 Ferguson also said Northern Ireland centre half Evans was unlikely to be fit for Sunday's game after missing the Manchester City match.

The two Manchester clubs are locked together on 83 points with two matches remaining, with City top of the table on goal difference and visiting fifth-placed Newcastle United on Sunday.

Ferguson said he liked the way slick-passing Swansea, who are 12th in the 20-team league, had handled their first season back in the top flight.

"The way Swansea have played this season has been admirable," he explained. "The manager (Brendan Rodgers) has stuck by his principles and they've had a fantastic season."