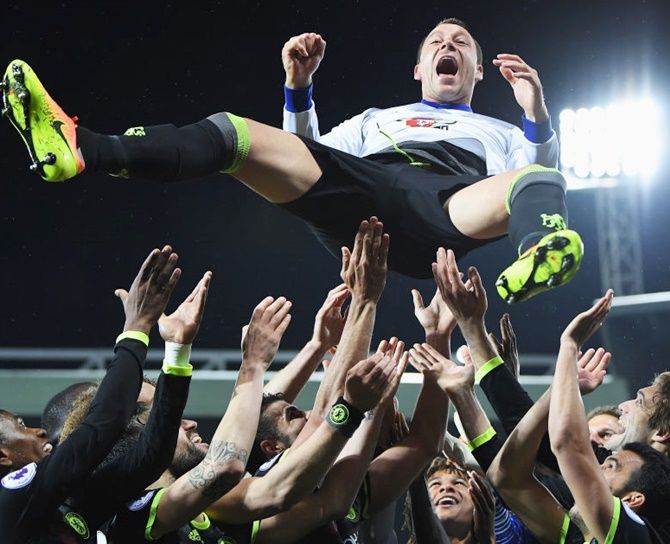 IMAGE: John Terry of Chelsea is thrown in the air by team mates while celebrating. Photograph: Laurence Griffiths/Getty Images

John Terry has had many highs and a few lows in his two decades at Chelsea, so it was fitting that he was both hero and villain in what was possibly his last full appearance for the club he joined as a 14-year-old schoolboy.

Terry, who has played more than 700 times for Chelsea, responded to a rare return to the starting 11 against Watford on Monday by opening the scoring in the 22nd minute in a helter-skelter, end-of-season, 4-3 win for Chelsea who clinched the Premier League title last week.

The 36-year-old former England captain hooked home a loose ball after a corner and wheeled away in celebration, rolling back the years for Chelsea fans who have long enjoyed the sight of their skipper claiming key goals while also shoring up a defence that was often the bedrock of the club's successes.

The party atmosphere went quiet within seconds of the restart, however, when Terry failed to clear a cross in front of the Chelsea goal, heading the ball up rather than out of the danger area and giving Etienne Capoue the simplest of tasks to equalise.

Terry grimaced, knowing he might have given up his last chance of an unblemished farewell although Chelsea ended up winning the roller-coaster game thanks to a late winner by Cesc Fabregas. 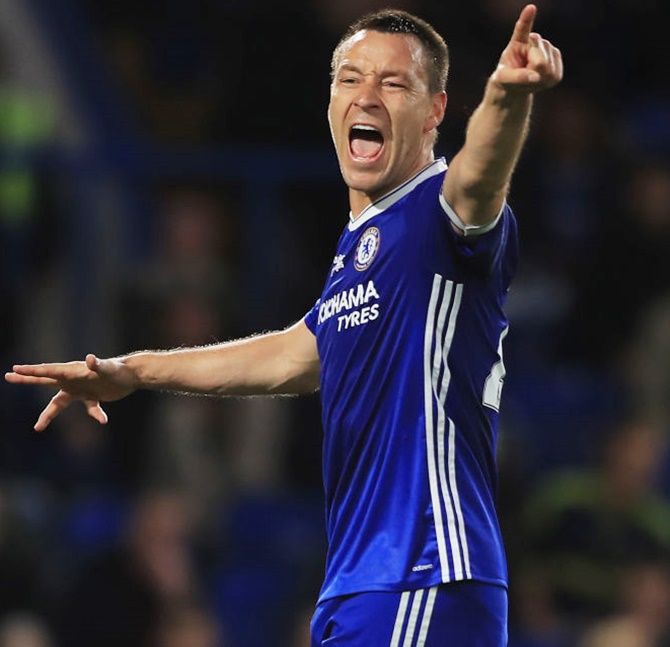 Terry has spent much of the season on the substitutes' bench as Italian coach Antonio Conte opted for a three-man defensive system that required more speed than the veteran has.

But the man Chelsea fans hail as ‘captain, leader, legend’ in banners draped around the stadium was able to compensate for years through his astute reading of the game, accurate passing, natural strength and sheer commitment.

At a club accustomed to buying the best talent available on the global market, Terry struck a chord with fans as a hard-working local lad who reached the very top of the game.

Despite off-field controversies, including a charge of racist abuse for which he was cleared in court and an alleged affair with a former team mate's ex-girlfriend, Terry hardly ever let Chelsea down on the pitch.

Conte hinted that Terry was unlikely to start Chelsea's final league game of the season on Sunday against already relegated Sunderland as the coach said he wanted to get his FA Cup final team ready and playing ahead of the May 27 showdown against Arsenal.

But he also said he wanted Terry to lift the English league trophy next week as a final send-off.

Terry said he was proud to be ending his time at Chelsea with a fifth Premier League winners' medal and the FA Cup Final still to come.

"If I could have written my story as a 14-year-old, when I signed on the pitch, this would have been it," he wrote in Monday's matchday programme.