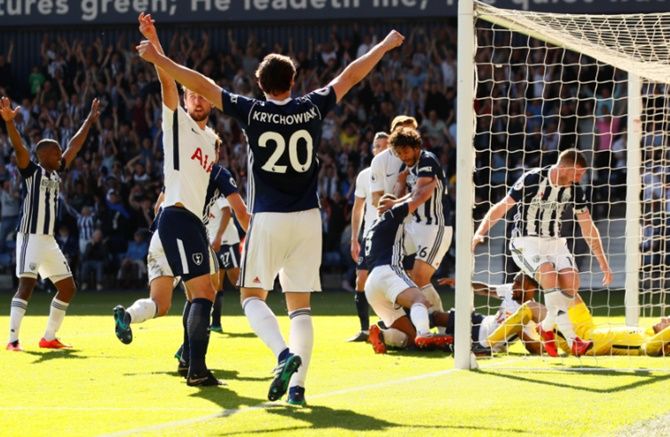 West Bromwich Albion held on to their slim hopes of avoiding relegation albeit for a few hours after a stoppage-time goal by Jake Livermore gave them a lifeline 1-0 home win over Tottenham Hotspur on Saturday.

With one game remaining, West Brom moved up to 19th on 31 points from 37 matches, one behind Southampton and two adrift of Swansea who both have games in hand ahead of a thrilling climax to the relegation battle.

Goalkeeper Ben Foster conceded he had lost all hope of staying up before West Brom's late revival which started with a shock 1-0 win at Manchester United on April 15.

"Six weeks ago I had us resigned to relegation," former United keeper Foster told the BBC.

"I accepted our fate was inevitable. Fair play to (caretaker manager) Darren Moore and the coaches. The mental side is 50-50 with the fitness.

"The lads really put their hearts on the line and were brilliant. We know we are a threat at set pieces and we managed to nick one."

Former Tottenham midfielder Livermore struck deep into stoppage time to send the home fans at The Hawthorns into raptures after both sides had missed good chances in a scrappy game dominated by the visitors.

Foster made several telling saves, having denied Victor Wanyama and Harry Kane in the first half and then kept out a pair of Eric Lamela efforts after the break.

Crucially, he produced a spectacular stop in the dying seconds after Livermore had scored to keep alive West Brom's dream of pulling off what would be a great escape.

Jay Rodriguez had a header cleared off the line and strike partner Salomon Rondon scuffed a close-range shot at the other end as anxiety crept into West Brom before Livermore capped the home side's late onslaught.

Spurs boss Mauricio Pochettino was unhappy with his team's lack of cutting edge.

"In football you can dominate but you need to be clinical in front of goal and today wasn't good," he said.

"I am very disappointed because we lost the game. Still, we have it in our hands to be in the top four." 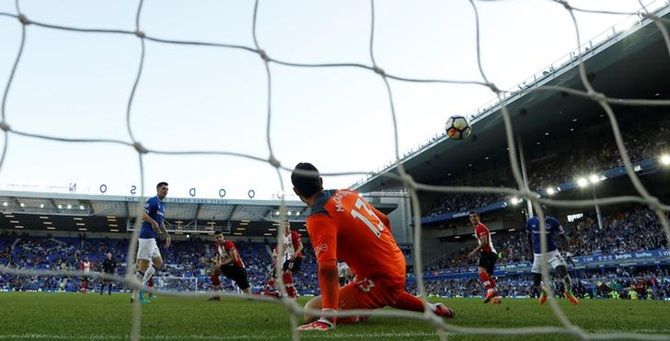 Southampton moved out of the Premier League relegation places with a 1-1 draw at Goodison Park on Saturday but were denied victory by an equaliser in the fifth minute of added time.

Substitute Nathan Redmond headed their goal from Cedric’s cross 11 minutes after coming on at halftime.

Southampton defender Maya Yoshida was sent off in the 85th and deep into added time Tom Davies equalised with a shot that took a heavy deflection.

The Saints now have 33 points, ahead of Swansea City, whom they visit on Tuesday, on goal difference.

Everton are comfortable in eighth place but fans distributed leaflets protesting about what they called “the awful football we’ve endured for a number of years”. 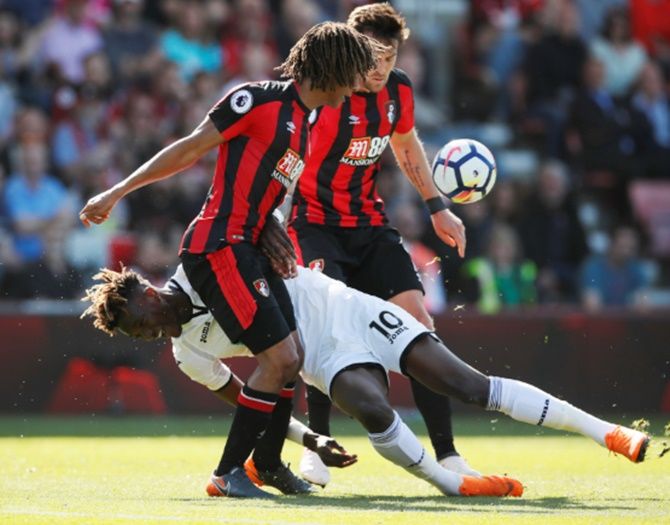 Swansea City's hopes of salvaging their place in the Premier League suffered a potentially grievous blow as Ryan Fraser's deflected strike earned Bournemouth a 1-0 win on Saturday to secure another season of top-flight football for the Cherries.

Bournemouth ended a run of three straight defeats when Andrew Surman rolled a 37th-minute free kick across the edge of the box to the diminutive Fraser, whose shot cannoned off Alfie Mawson to leave Lukasz Fabianski with no chance.

Jordan Ayew should have equalised minutes later only to shoot wide from six metres but although they had their chances, Carlos Carvalhal's side were unable to add to their 33-point haul in the danger zone.

Swansea, winless in seven matches, have two more games at home to relegation rivals Southampton and doomed Stoke City but Eddie Howe's Bournemouth, who could have won more convincingly but for fine keeping from Fabianski, are safe. 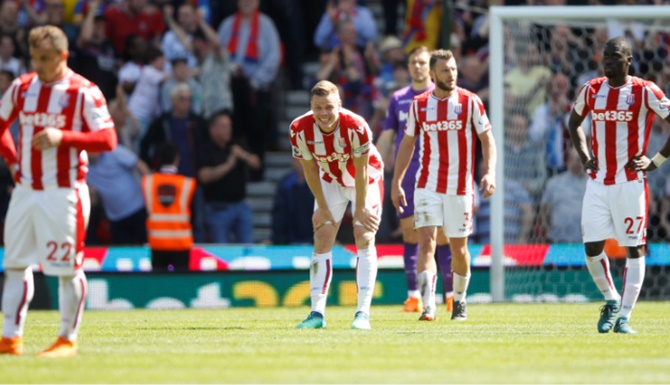 Stoke City were relegated from the Premier League on Saturday after their dismal season culminated in them giving up a first-half lead against Crystal Palace before succumbing to a deserved 2-1 defeat.

The Potters had to win to give themselves the faintest hope of maintaining their 10-year stay in the top tier of the English game but Paul Lambert's ailing side, who have not won in 13 league matches, went down to a late Patrick van Aanholt goal.

Xherdan Shaqiri had given Stoke hope with a deflected 43rd- minute free kick, only for James McArthur to equalise midway through the second half after a slick counter-attack.

Then, as Palace piled on the pressure, Van Aanholt struck four minutes from time as Stoke's worst run in the top flight for 34 years sealed their fate while Roy Hodgson's resurgent Palace could celebrate another year of Premier League football. 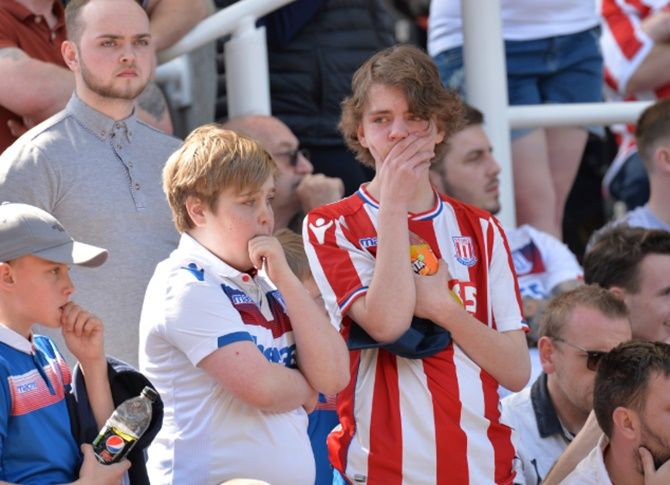 A crestfallen Ryan Shawcross, Stoke's captain whose late mistake led to Van Aanholt's goal, admitted his team had not been good enough all season.

"We've had a right go every single game (under Lambert) but for whatever reason, we haven't got the goals we needed and ultimately it's cost us," he told Sky Sports.

"It's difficult to take but it's a great club this and we'll be back."

With Palace not at their sharpest in a nervy opening half, it took the quality of Shaqiri to break the deadlock as he began a promising move with a fine cross-field ball, then tempted Ruben Loftus-Cheek into a clumsy challenge 23 metres out.

The Swiss international's curled free kick took a slight diversion off Loftus-Cheek in the Palace wall to give Stoke a lifeline.

Yet the home side increasingly retreated as Palace began to swarm over them after the interval, with McArthur, overlapping on the left, slotting home an excellent left-footed finish after the visitors broke from deep in their own half.

A draw would not realistically have been enough to save Stoke but their fate was sealed when Shawcross, trying to clear his lines, diverted the ball straight into the path of the charging full back Van Aanholt.

"The goal was my fault. Sometimes you make mistakes and they cost you," said Shawcross.

The win sealed Palace's safety, a remarkable achievement for former England manager Hodgson, who had to pull off a considerable feat of escapology after the Eagles' desperate start to the season under Frank de Boer. 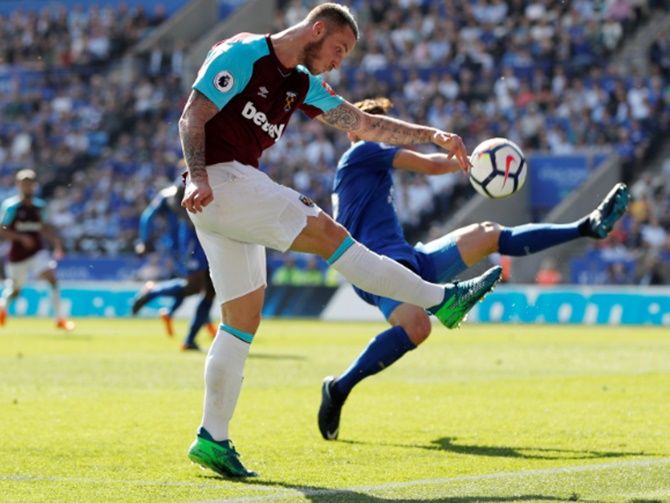 West Ham United improved their prospects of avoiding relegation from the Premier League with deserved 2-0 victory at below-par Leicester City on Saturday.

West Ham, who moved on to 38 points and should be safe with two home games remaining, were the brighter side from the start and deserved their lead after 34 minutes.

The lively Marko Arnautovic hit the bar, then regained possession and laid on a pass to give Portuguese international Joao Mario a simple goal. Leicester protested in vain that Arnautovic had fouled Christian Fuchs.

Booed off at halftime, the hosts improved a little with a double substitution but conceded again in the 64th minute to Mark Noble's fine volley. Leicester remained ninth in the table.

© Copyright 2022 Reuters Limited. All rights reserved. Republication or redistribution of Reuters content, including by framing or similar means, is expressly prohibited without the prior written consent of Reuters. Reuters shall not be liable for any errors or delays in the content, or for any actions taken in reliance thereon.
Related News: Stoke City, Patrick van Aanholt, Ryan Shawcross, Reuters, Crystal Palace
COMMENT
Print this article 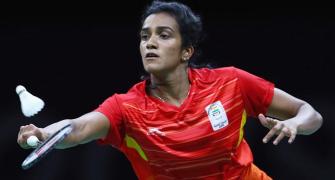 Sindhu on a string of narrow final losses 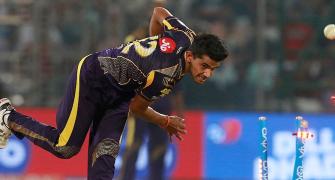 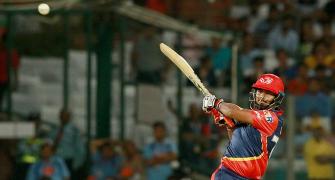 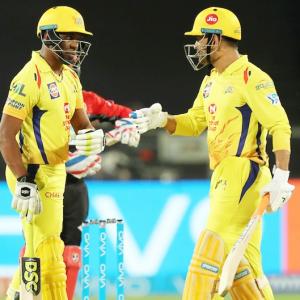 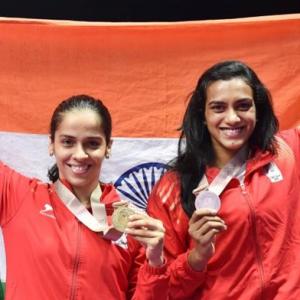