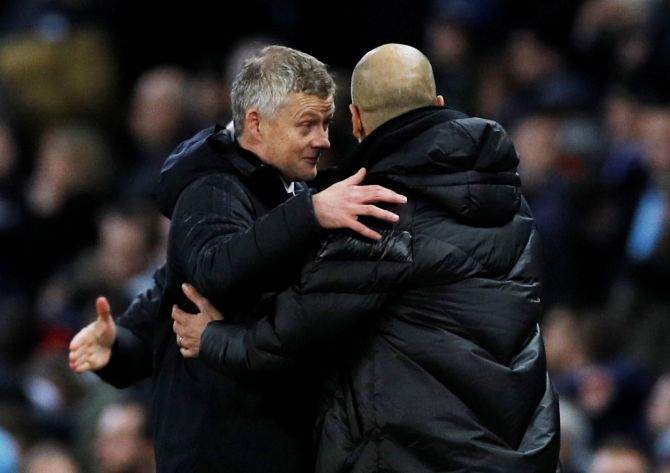 Manchester United manager Ole Gunnar Solskjaer went into a crucial week of fixtures with critics questioning whether he was the right man for the job of restoring the club's fortunes.

But those sniping at the Norwegian will surely be a little quieter now after, in the space of four days, he masterminded victories over two of the most respected managers in the game, Jose Mourinho and Pep Guardiola.

After beating Champions League runners-up Tottenham Hotspur at Old Trafford, Solskjaer's young side enjoyed a memorable 2-1 triumph over back-to-back champions and domestic treble winners Manchester City on their own patch on Saturday.

The noise tends to come from social media, talk-radio and pundits who are quick to judge from short-term results, which is a particularly inappropriate approach given the task Solskjaer has been given of creating a new, more youthful team, out of the mess he inherited from Mourinho almost a year ago.

Marcus Rashford, whose three goals and all-round performances in both this week's wins, showed he has the talent and attitude to become a real long-term favourite at the club, summed up the situation well.

"It's been an inconsistent start to the season, it's a young team, and we've been trying to get the right fundamentals and the only way to get consistency is to go through these hard times," he said.

"You have to stick with the manager and process. If we do that we've got something to be excited about in the future,"

The recent draws with Sheffield United and Aston Villa, were a reminder that much work remains to be done but the response means Solskjaer's side are now fifth in the league, five points behind fourth-placed Chelsea.

United are the only team to have taken points off leaders Liverpool, with an October draw at Old Trafford, and they have beaten second-placed Leicester City, Chelsea and now City.

As Mourinho pointed out in midweek, United's counter-attacking style is much better suited for games against the top teams and that was certainly the case at the Etihad.

Dan James and Anthony Martial provided pace and penetration down the flanks while Rashford continued to show his improvement in understanding the flow of attacks and his positioning within them.

In midfield Scott McTominay is now looking a Premier League quality defensive lynch-pin with Brazilian Fred flowering as a result of a regular run of starts. Jesse Lingard provides attacking options but showed another side of his game by effectively neutralising City's deep midfielder Rodri.

Defensively, United showed a solidity that hasn't always been there this season but they still needed outstanding saves from their Spanish keeper David De Gea to leave with the three points.

Solskjaer certainly feels that progress is being made.

"I've seen the improvement since I came, the boys have had to reshape the squad, change culture of the squad, the way we want to play," he said.

It could, given the chances United created before and after their first-half goals, have been an even more emphatic result and the way they approached the game, with real self-belief, shows that something is working at the club's Carrington training ground.

"I was so happy with the way we started the game, we created big chances, looked like we'd score. The intent was there to go forward, not about keeping it, slowing it down we go for the kill and should have been 3-0 or 4-0 up," Solskjaer said.

"But you have to defend well, the way we prepared for this game, you follow this (City) team for three years, they're so good and I am very pleased with how they dealt with everything, our boys."

Former Manchester United skipper Roy Keane said the club's 2-1 win over defending Premier League champions Manchester City on Saturday will give the players much-needed confidence to shed the inconsistency that has dogged them all season.

"I absolutely did not see this coming. It was fantastic -- a proper United performance. Lots of bravery and personality. They were outstanding," Keane told Sky Sports.

"I don't think beating Tottenham was a big deal at home, but that win (over City) will give the players a lot of confidence as they have been criticised - nobody likes to be criticised.

"I really enjoyed watching them, it's what United is all about. But the key is to be consistent, week in, week out. Hopefully these young players will pick up on that."

Keane's ex-United team mate and fellow analyst Gary Neville suggested that the two wins were signs Solskjaer's project was taking shape and urged the club to back him in the January transfer window to add experience to the squad.

"It gives Ole a bit of breathing space and the confidence he can win big games as shown in the last four days," Neville said. "It does give you hope that there is something there that can produce that level of performance.

"But it doesn't change what United need to do in January. They need to get experience to bolster that squad. They need it desperately. Scott McTominay and Fred have done brilliantly, but they can't do it every week."

Manchester City manager Pep Guardiola said he liked how his team played against Manchester United despite facing a defeat.

"I like how my team played. We conceded a little bit more space -- not more than usual, but more than last year against United," Goal.com quoted Guardiola as saying.

Guardiola admitted that it is sometimes not possible to control the pace of Marcus Rashford, Anthony Martial and Daniel James. Rashford and Martial scored one goal each to help Manchester United win the match.

"We knew about the pace they have, with James, Martial and Rashford, but sometimes it is not possible to control it," he said.

Manchester City will next face Arsenal on December 15.

Greater Manchester Police have arrested a man in connection with alleged racial gestures and chants in Saturday's Premier League match between Manchester City and Manchester United at the Etihad Stadium, British media reported on Sunday.

Television images circulating on social media showed a City fan making a gesture in front of United's Brazilian midfielder Fred during the game, which the visitors won 2-1.

Fans also threw objects on to the field when Fred was taking a corner in front of them and he was struck at least once.

"A 41-year-old man has been arrested on suspicion of a racially aggravated public order offence and remains in custody for questioning," police said in a statement to the Daily Mirror.

Superintendent Chris Hill of the City of Manchester Division added in the statement: "Racism of any kind has no place in football or our society and I hope this arrest shows that we are taking this matter extremely seriously."

City said on Saturday that they had a zero tolerance policy regarding discrimination of any kind and anyone found guilty of racial abuse will be banned from the club for life.

The Football Association is also investigating the incident.

Should have done much better: Azpilicueta after defeat

After facing a defeat against Everton, Chelsea's Cesar Azpilicueta said they should have done much better in a game like this.

"We did not start very well because we knew they could have a reaction in the stadium with a new manager but we didn't cope well enough," the club's official website quoted Azpilicueta as saying.

"We should have done much better in a game like this. In the first five minutes we gave away a goal from a cross, which we knew they were dangerous from, and after that we were in trouble," he added.

Chelsea witnessed a 3-1 defeat at the hands of Everton on Saturday in Premier League. Richarlison scored the opening goal of the match in the fifth minute which was followed by two goals of Dominic Calvert-Lewin.

Chelsea had won the match against Aston Villa on December 5 before this defeat.

"We were coming from a very good game against Aston Villa but we didn't show ourselves to be mentally strong enough to cope with this," Azpilicueta said.