Chelsea and Manchester City tightened their stranglehold on the Premier League title race on Saturday, recording victories over struggling clubs to stretch further clear of their increasingly forlorn pursuers.

Normal service was resumed at Stamford Bridge as Chelsea maintained their three-point lead over City at the top with goals from Eden Hazard and Diego Costa sinking 10-man Hull City 2-0.

City's delight, though, was tempered by another injury setback with captain Vincent Kompany, just back after being sidelined, limping off again with hamstring trouble.

Fourth-placed West Ham's progress was checked by a 1-1 draw at Sunderland and Southampton lost 1-0 to an Ashley Barnes goal at Burnley. 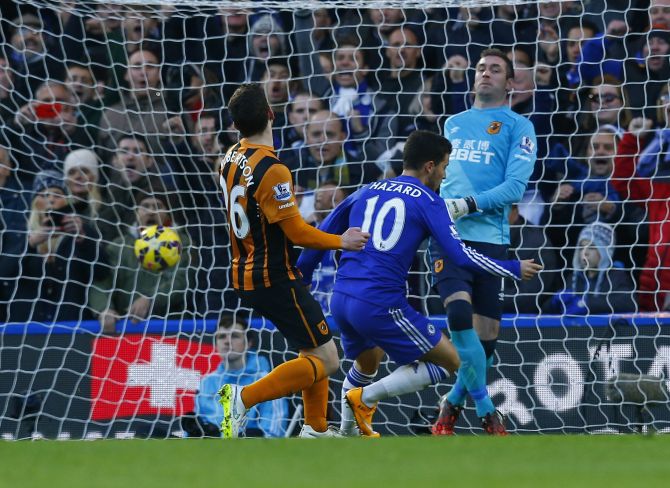 That left the chasing pack, headed by third-placed Manchester United and West Ham, 11 points behind Chelsea and eight adrift of the champions.

It also put pressure on Louis Van Gaal's United before their match against Liverpool on Sunday.

Chelsea, smarting about their first defeat of the season at Newcastle last weekend, inevitably made Hull suffer swiftly.

The visitors had barely touched the ball for seven minutes before Hazard headed home Oscar's cross but, even without the burden of the 'Invincibles' talk, the home side's expected deluge of goals never materialised.

Only after Tom Huddlestone was dismissed for a nasty late stamp on Filipe Luis did Chelsea seal the deal, Costa scoring his 12th goal of the season from a Hazard assist after 68 minutes to make it eight home wins out of eight for Jose Mourinho's men. Manchester City boss Manuel Pellegrini, already without his injured goalscoring totem Sergio Aguero, was forced to hand a start to Spaniard Jose Pozo, the 18-year-old being hailed as the 'Mini Messi', after Edin Dzeko pulled up injured in the warm-up.

The lightweight youngster, however, found it hard going against Leicester's committed defenders and it was left to the remarkable Lampard to make the breakthrough just before the interval.

The midfielder timed his run into the box with predictable efficacy to sidefoot the ball home after fine work from Samir Nasri, the hero of City's midweek Champions League triumph at Roma.

The 36-year-old's latest crucial intervention will not have escaped his old disciples at Chelsea as Lampard's 175th goal took him to fourth equal on the all-time list of Premier League scorers, an astonishing achievement for a midfielder. West Ham manager Sam Allardyce was left raging by the award of a 22nd-minute penalty to Sunderland, after Adam Johnson had tumbled rather too easily for his liking. He was even angrier when Jordi Gomez converted.

Even though Stewart Downing equalised seven minutes later, the Hammers failed to claw back to third place, with Andy Carroll coming closest to earning them a win when shooting wide in the dying seconds.

After such a tremendous start to the season, Southampton's woes continued with a fourth consecutive defeat. They paid the price after Tom Heaton saved Dusan Tadic's penalty on the hour and Burnley jumped out of the bottom three with Barnes's winner.

James McArthur gave Crystal Palace an 11th-minute lead but Peter Crouch side-footed an equaliser within two minutes as Stoke earned a 1-1 draw in a scrappy game at Selhurst Park.

Craig Gardner's 72nd-minute winner against his old club earned the spoils for West Brom in a 1-0 win over local rivals Aston Villa, who had Kieran Richardson sent off, at the Hawthorns.

© Copyright 2021 Reuters Limited. All rights reserved. Republication or redistribution of Reuters content, including by framing or similar means, is expressly prohibited without the prior written consent of Reuters. Reuters shall not be liable for any errors or delays in the content, or for any actions taken in reliance thereon.
Related News: Eden Hazard, Chelsea, Manchester City, Frank Lampard, Sunderland
COMMENT
Print this article 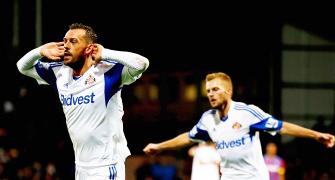 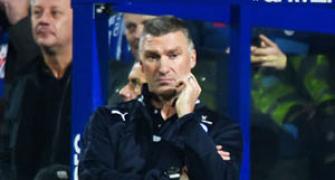 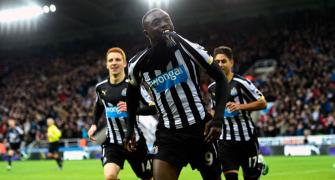