'Today Salah was on it and he punished us' 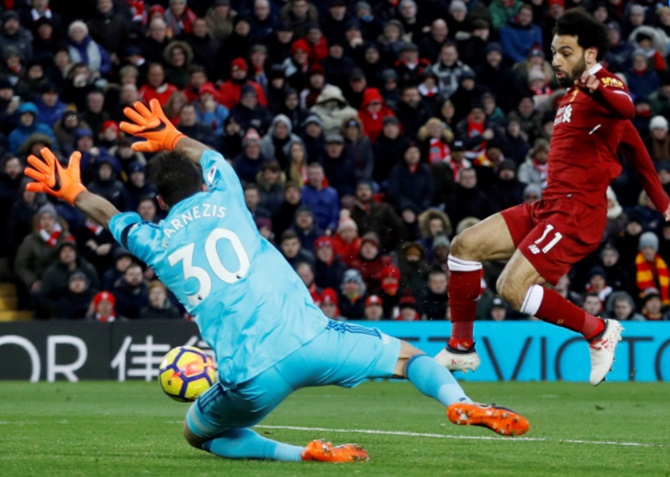 Mohamed Salah struck four times in rampant Liverpool's 5-0 thrashing of Watford that lifted them back into third spot in the Premier League on Saturday.

The unstoppable Egyptian needed only four minutes to put his side in front and he doubled his tally just before halftime.

He set up Roberto Firmino for a cheeky effort early in the second half before placing a shot through a crowd of Watford defenders to complete his first Liverpool hat-trick.

There was no respite for Watford at a snowy Anfield as the clinical Salah smashed in his fourth goal in the 85th minute -- from his fourth shot on target.

Salah's majestic display moved him four goals clear of Tottenham Hotspur's Harry Kane in the race for the Premier League's Golden Boot, with 28, and his 36 in all competitions is the most by a Liverpool player in a debut season for the club.

Liverpool have 63 points from 31 games, two more than Tottenham Hotspur who have played 30. More importantly, they are now seven points clear of fifth-placed Chelsea in the tussle for the top four and Champions League qualification.

"The goals we scored were unbelievably good, and the boys didn't stop. That's how football should be, so I'm really happy with the performance," Liverpool manager Juergen Klopp said.

"For Mo to be involved in five goals is fantastic but to score four is even more fantastic."

Salah is the first Liverpool player to score four goals in a league match since Luis Suarez in 2013 and it took him only four minutes to get started, firing in after his ball control and pace left Watford's defence floundering.

Liverpool, who needed a positive response after losing to Manchester United last week, went off the boil for much of the first half but Salah tapped in Andy Robertson's cross close to halftime to move past the 33 goals scored by Fernando Torres in his first season at Anfield in 2007-08.

When his cross picked out Firmino who finished with his back to goal for Liverpool's third in the 49th minute it was a matter of how many the hosts would score.

Salah sealed his hat-trick when he wriggled into the area and stabbed the ball past Watford keeper Orestis Karnezis and added his side's fifth whe he pounced to smash home a loose ball after another fine Liverpool move.

Watford had decent spells in the first half and Roberto Pereyra did strike the crossbar with a second-half free kick, but they were easy pickings for Klopp's slick side.

"It was a real tough day for the whole team -- 5-0 is a pretty embarrassing scoreline," Watford defender Adrian Mariappa said. "Today Salah was on it and he punished us." 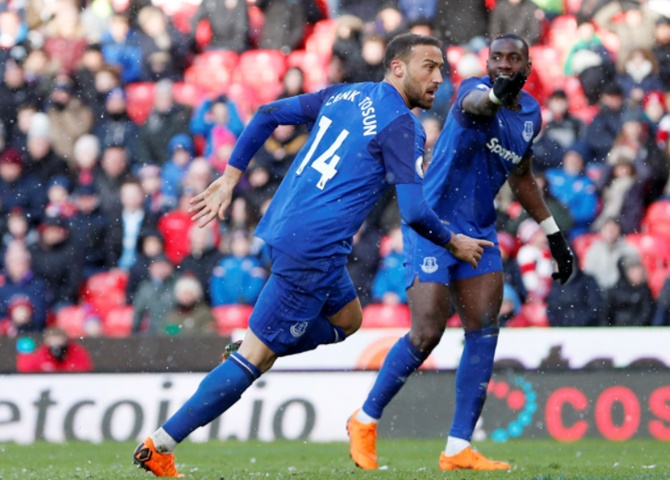 Turkey forward Cenk Tosun struck twice after the break as Everton beat 10-man Stoke City 2-1 in the snowy Midlands to end a miserable away run in the Premier League and deepen their hosts' relegation fears on Saturday.

Stoke had Charlie Adam sent off before halftime for a rash foul on Wayne Rooney but defended resolutely to hold the visitors at bay until the 69th minute when Tosun scored from close range after having a first attempt saved.

When substitute Eric Maxim Choupo-Moting poked in Joe Allen's free kick in the 77th minute, injuring himself in the process, it seemed second-bottom Stoke might salvage an important point in the relegation scrap.

But their hopes were crushed when Tosun beat England keeper Jack Butland with a diving header from Theo Walcott's delivery to end a run of five straight away league defeats for Everton and take them to 40 points.

Stoke remained three points below the safety zone and with games against Arsenal, Tottenham Hotspur and Liverpool next month their 10-year residence in the top flight is in peril.

Adam got his marching orders in the 30th minute for a lunging two-footed tackle on Rooney and manager Paul Lambert had no complaints about that decision.

He was upset, however, at Tosun's opening goal, feeling the Turkish player was offside for his initial effort, which was saved by Butland before the ball came back to him.

The result plunged West Brom closer to relegation as they remain rooted to the foot of the table with 20 points from 31 games, seven behind 19th-placed Stoke City -- and 10 short of safety -- with seven games remaining.

It also equalled their record of seven successive league defeats set between February and April 2003. Bournemouth climbed one place, to 11th on 36 points, eight clear of the relegation zone.

The home side lacked any spark or creativity for much of the contest but turned the match on its head in the closing stages after Jay Rodriguez had given West Brom a 49th-minute lead.

Although Bournemouth are well-placed to secure a fourth successive season in the top flight, Stanislas said they were not home and dry just yet.

Huddersfield Town manager David Wagner said his team had to improve their ball possession if they were to bounce back from Saturday's 2-0 home defeat by fellow strugglers Crystal Palace.

Goals in each half from James Tomkins and a Luka Milivojevic penalty secured the three points for Palace who looked a cut above their opponents in all areas, despite starting the game below them in the Premier League table.

"It is a defeat that I am able to deal with because I know exactly where we went wrong," German Wagner told reporters.

"We were not good enough in ball possession, we gave the ball away too easily and were not calm enough," he added.

"We rushed too many situations from my point of view, (we are better) where we can be calm enough and circulate the ball rather than too immediately penetrate and pass forward. You have to wait for the right moments to take risks," Wagner said.

Huddersfield are 15th but just three points above the relegation zone and their next two games are away to fellow promoted sides Newcastle United and Brighton and Hove Albion.

But Wagner said his side would need to be more compact and make better use of the ball.

"If you give the ball away too easily the distances between you and your team-mate are too big and you are never able to win the ball back. You are always a yard or two too late, Palace has top class players and they are able to use that two or three yards to be a threat," he said.

"It’s important how you manage defeats and a disappointment like today. The good thing is that we know what we have done wrong and what we need to put right," he added.

© Copyright 2020 Reuters Limited. All rights reserved. Republication or redistribution of Reuters content, including by framing or similar means, is expressly prohibited without the prior written consent of Reuters. Reuters shall not be liable for any errors or delays in the content, or for any actions taken in reliance thereon.
Related News: Cenk Tosun, Watford, Mohamed Salah, Liverpool, Tottenham Hotspur
SHARE THIS STORYCOMMENT
Print this article 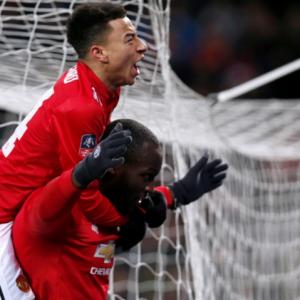 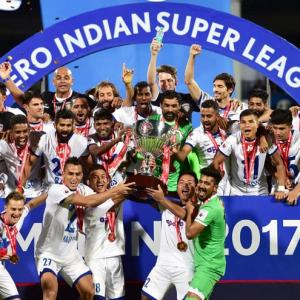