Man City fight back to draw at West Ham Manchester City fought back from 2-0 down to draw 2-2 with West Ham United on Sunday and stay in charge of their thrilling Premier League title battle with Liverpool.

Juergen Klopp's team play at Southampton on Tuesday and City had the chance to open a six-point lead at the top but the draw at the London Stadium left them four points above Liverpool with one game left.

Victory on the final day at home to Aston Villa would guarantee City their fourth league title in five seasons, regardless of Liverpool's results against Southampton and Wolverhampton Wanderers.

Pep Guardiola's team will win the title on Tuesday if Liverpool lose at Southampton.

West Ham's Jarrod Bowen struck twice in the first half but Jack Grealish pulled one back for City early in the second half before Vladimir Coufal scored an own goal. Riyad Mahrez missed a golden chance to seal a City win after he missed a late penalty.

After City defender Oleksandr Zinchenko lost track of Bowen, the West Ham forward raced on to Pablo Fornals' pass over the top and took it round goalkeeper Ederson for a clinical finish in the 24th minute.

Bowen added another in the 45th minute when Michail Antonio sent him through with a clever pass and the English forward's low strike from the edge of the box found the bottom corner.

City bounced back in the second half after playmaker Grealish scored for the visitors in the 49th minute with a volley after Rodri headed a high ball over to him in the box.

West Ham had the chance to add their third goal in the 65th minute when a loose back pass from Fernandinho sent Antonio through on goal but the Jamaica forward sent his shot over the bar.

The hosts were left to rue the missed chance as they conceded an own goal, with West Ham defender Coufal heading a cross from Mahrez into his own net in the 69th minute.

Mahrez could have become City's hero in the 86th minute but his spot-kick was kept out by keeper Lukasz Fabianski after Craig Dawson brought down Gabriel Jesus in the penalty box.

The result guaranteed West Ham European football next season as they stayed seventh on 56 points.

The game also marked Mark Noble's farewell game in front of home fans, with the midfielder set to bring the curtain down on his 18-year, one-club career at the end of the season. Spurs climbed above North London rivals Arsenal into fourth on 68 points from 37 games -- the Gunners are on 66 from 36 matches and can return to the top four if they win at Newcastle United on Monday.

Burnley, under caretaker manager Mike Jackson, went into the game in 17th place and will slip back into the bottom three if Leeds United avoid defeat at home to Brighton & Hove Albion.

Despite dominating the chances, Spurs were hanging on nervously in the final minutes and Conte praised their resilience with so much at stake and just a single goal lead against a team who beat them in February.

"Burnley were the perfect team to test our nerves," said the Italian.

"I’m not sure that if we face this game three months ago we can celebrate three points at the end of the game. This team has improved a lot, not only in the tactical and technical aspects but also in their mentality," he said.

But in stoppage time before the interval, referee Kevin Friend was sent to review a handball incident and ruled that the arm of Ashley Barnes had been in an "unnatural position" when the ball struck it.

Kane drilled the spot-kick into the bottom corner but Burnley's protests continued after the halftime whistle with angry exchanges in the tunnel.

Pope made two outstanding saves after the break to keep out Son Heung-min while Barnes struck the post for Burnley with a thundering drive from distance.

But Spurs were forced to defend deep in the closing stages as Burnley pumped crosses into the area in the hope of a late equaliser.

It didn't arrive and a relieved crowd were left to celebrate three vital points for Spurs whose last game of the season is at relegated Norwich City.

"If we keep that spirit it gives us a real chance," said Jackson, who while upset with the penalty award said he was proud of the way his team, without first-choice central defenders Ben Mee and James Tarkowski, had coped with Spurs. 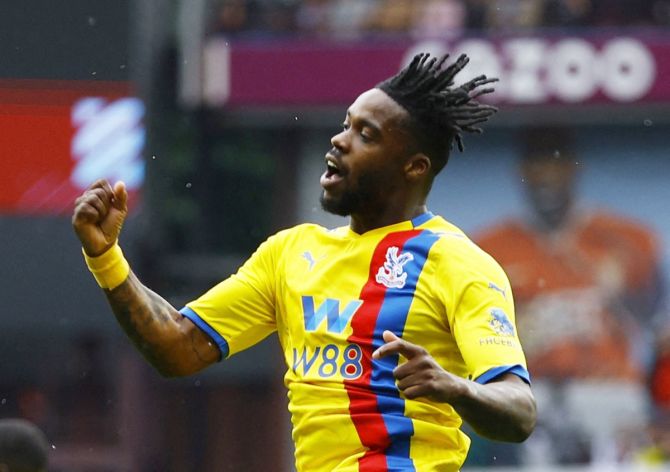 Substitute Jeffrey Schlupp struck an 82nd-minute equaliser as Crystal Palace fought back for a 1-1 draw at Aston Villa in the Premier League on Sunday.

Danny Ings twice came close to opening the scoring for Villa, firing wide from a John McGinn cross and putting a volley over the bar.

Villa keeper Emiliano Martinez did well to keep out Nathaniel Clyne's effort for Palace but it was the home side who took the lead in the 69th minute through Ollie Watkins who confidently converted a fine ball from French full back Lucas Digne.

Palace pushed forward in search of an equaliser and got their reward when Schlupp slotted home from close range to earn a share of the points for Patrick Vieira's side. 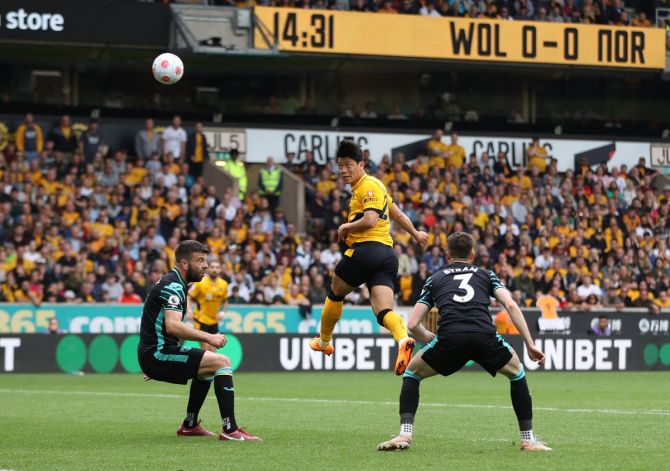 Wolverhampton Wanderers' hopes of playing in Europe next season ended following a 1-1 draw with relegated Norwich City in the Premier League on Sunday.

Bottom placed Norwich took a surprise lead in the 38th minute after striker Teemu Pukki sent a low shot into the right corner.

Defender Rayan Ait Nouri levelled for Wolves in the 55th, with the France Under-21 international nodding in a rebound following a free kick from close range.

With one game left to play, Wolves are eighth in the standings on 51 points, five below seventh-placed West Ham United. The seventh-placed team qualify for the continent's third tier competition, the Europa Conference League. 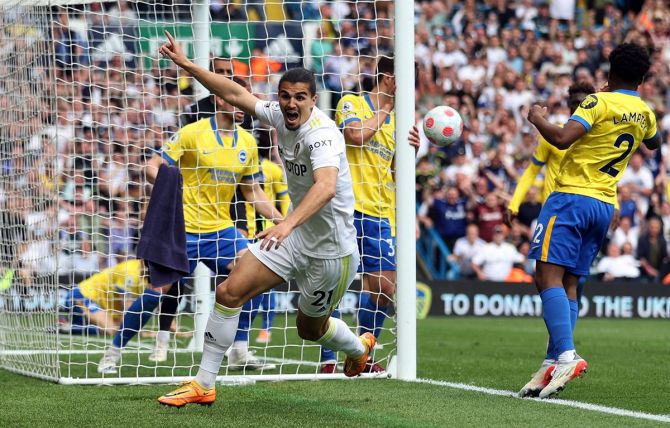 A stoppage-time header from substitute Pascal Struijk snatched Leeds United a crucial 1-1 draw against Brighton & Hove Albion on Sunday to lift them out of the Premier league relegation zone.

With Burnley beaten by Tottenham Hotspur earlier on Sunday, Leeds knew that they could leapfrog the Turf Moor Club and get out of the relegation zone provided they avoided defeat against Brighton.

But they got off to the worst possible start in front of a raucous Elland Road as Danny Welbeck gave Brighton the lead in the 21st minute.

Leeds fans grew more and more frustrated as the match wore on and an equaliser remained elusive, singing the name of previous coach Marcelo Bielsa and chanting "sack the board" in the direction of the club's owners in the director's box.

However, there was late, late drama as Struijk arrived at the back post to snatch a draw in the 92nd minute, sparking wild celebrations among players, staff and supporters.

It could be the goal that preserves Leeds' Premier League status next season, with Jesse Marsch's side now on 35 points ahead of next weekend's final round of fixtures, one clear of 18th-placed Burnley, who have two games left. Brighton stayed 10th.

Leeds fans gave a rousing welcome to a host of former players from their 1974 and 1992 top-flight title-winning seasons before kickoff and the crowd were further buoyed by Burnley's loss being announced pre-game.

Leeds almost got the dream start when Joe Gelhardt hooked the ball goalwards, only for his effort to cannon out off his team mate Liam Cooper on the line.

The pressure told as the Premier League's second worst defence was again breached, with Welbeck muscling Leeds defender Diego Llorente off the ball before clipping a sumptuous finish into the net.

As frustration became more palpable around the stadium, Leeds almost levelled through Mateusz Klich but his near-post effort was brilliantly saved by Brighton goalkeeper Robert Sanchez.

Brighton chose to sit back in the second half and invite pressure from Leeds, with Raphinha firing a thunderous free-kick from distance towards goal but Sanchez was again at his best to deny the Brazilian.

Often Leeds's most potent attacking threat, Raphinha almost nudged one home at the back post, only to see his attempt roll wide.

Leeds looked to be heading for a fourth straight loss until Struijk edged his header over the line.

The Yorkshire side have scored a Premier League high seven stoppage-time goals this season. Crucially, six of those seven goals won points. 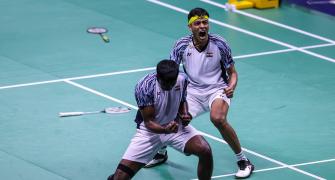 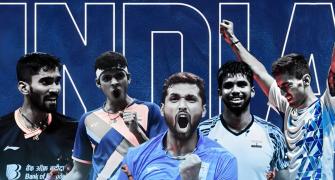 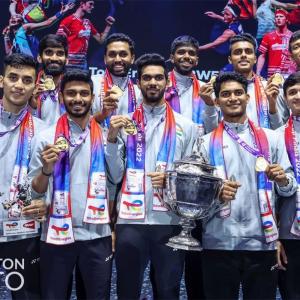