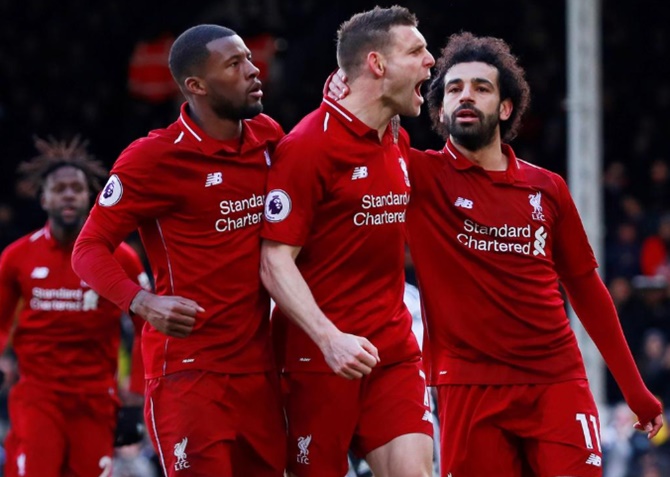 Liverpool’s livewire Sadio Mane scored one goal and played a crucial part in the other as they reclaimed the Premier League’s top spot with a scrappy 2-1 win at second bottom Fulham on Sunday.

It had looked like being a frustrating day for Juergen Klopp’s side after Mane’s opener was cancelled out by Ryan Babel following a mistake by Virgil van Dijk, but substitute James Milner slotted home an 81st-minute penalty to take the points.

Klopp was delighted with the outcome and his team’s ability to grind out what could be a telling result in their bid to win their first league title since 1990.

“We started really well, and did a lot of good things but lost the rhythm a bit,” the German told Sky Sports.

“I am not the most experienced manager and I have similar problems after Champions League games.

“First half a bit rusty. Second half we could have finished it off and then it is clear at 1-0 if you don’t kill it off that can happen. They deserved a goal but we deserved three points. A brilliant afternoon I have to say.

“I am not in any doubt about my players’ nerves. It is about intensity. We go for perfection but it is rare that you get it.”

Liverpool have 76 points from 31 games, two more than champions Manchester City who have a game in hand. Fulham have 17 points and a mountain to climb if they are to avoid almost certain relegation from the top flight.

Mane scored his ninth league goal in as many games when he fired the visitors into a 26th-minute lead with a classy finish which typified Liverpool’s attacking mentality under Klopp.

The Senegal forward exchanged a blistering one-two with Roberto Firmino before he buried his shot from seven metres past Fulham keeper Sergio Rico, who then denied Andy Robertson and Van Dijk either side of halftime.

Mane shaved the crossbar with a glancing header before a calamitous Van Dijk error gifted Fulham a 74th-minute equaliser, as his poor header back to keeper Alisson Becker was intercepted by former Liverpool winger Babel.

The Dutchman beat Alisson to the ball and refrained from celebrating against his former club after stroking the ball into an empty net.

“Obviously I respect my old club,” Babel said after Fulham set a club record of seven successive Premier League defeats. “I still support them as a fan so of course I showed them respect.”

Another howler, this time by Rico, decided the contest as the keeper spilled a tame Mohamed Salah shot and then hauled down Mane who pounced on the rebound, leaving Milner to stroke home the winner from the spot. 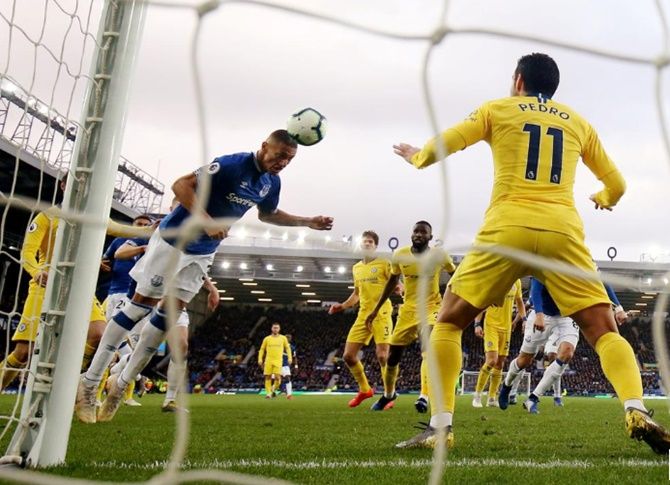 Goals from forward Richarlison and midfielder Gylfi Sigurdsson helped Everton beat Chelsea 2-0 in the Premier League on Sunday, denting the London side’s hopes of finishing in the top four.

Brazil’s Richarlison headed Marco Silva’s side in front from close range in the 49th minute after Kepa Arrizabalaga had kept out striker Dominic Calvert-Lewin’s powerful header from Sigurdsson’s corner.

Everton went 2-0 up in the 72nd minute when Sigurdsson put the ball past Arrizabalaga from the rebound after his penalty kick was saved by the Chelsea goalkeeper following a foul in the box on Richarlison by Marcos Alonso.

“It would be easier for me just to speak about the second half. The first half I didn’t like it at all, we were not there from the first minute,” Silva told Sky Sports.

“I told our players at halftime they have to do everything different. And they did. They showed great attitude, character and personality.”

Everton were a transformed side in the second half and went close two minutes after the break, when midfielder Andre Gomes forced a save with a stinging shot from distance. They then took full control of the contest.

Chelsea had been unlucky not to score after a good start. Eden Hazard’s drive was saved by Jordan Pickford in the sixth minute, before he hit the post a minute later and Argentina striker Gonzalo Higuain had a shot cleared off the line.

Everton climbed to 11th with 40 points from 31 matches while defeat meant that sixth-placed Chelsea stayed on 57 points from 30 games, a point behind Manchester United above them and three points behind fourth-placed Arsenal.

Coach Maurizio Sarri was at a loss to explain his side’s collapse. “I don’t know and the players don’t know what happened in the second half,” the Italian said.

“I cannot explain it. We played the best first half in the season and we could have scored four or five and then suddenly we stopped playing. It’s strange and we stopped to defend and counter-attack.

“The problem was mental on the pitch, so the system and the tactics are not important. It wasn’t about motivation because we started very well. We have to play eight matches now and we have to fight for our possibilities.”