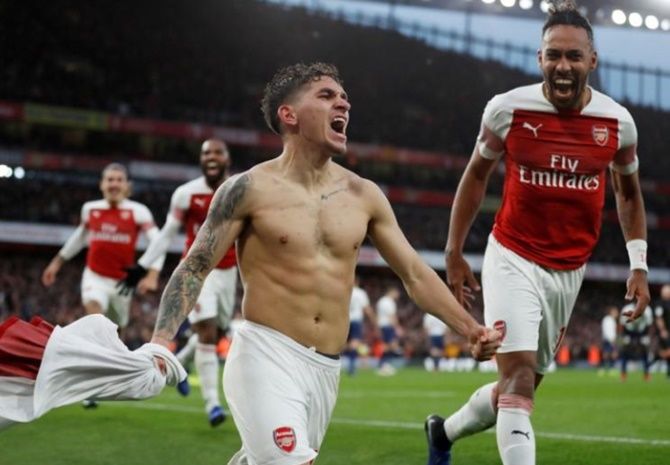 Arsenal leapfrogged rivals Tottenham Hotspur with a thrilling 4-2 victory and Liverpool’s forgotten man Divock Origi scored a freak 96th minute winner to earn a 1-0 win over Everton on a dramatic ‘derby day’ in the Premier League on Sunday.

Pierre-Emerick Aubameyang shot ahead as the league’s top scorer with his double for Arsenal in an epic north London contest while at Anfield, Origi’s stoppage-time winner kept Liverpool just two points behind leaders Manchester City.

Chelsea, 2-0 winners over Fulham in the day’s other London derby at Stamford Bridge, put the Blues third in the table on 31 points after 14 games, five behind second-placed Liverpool and seven adrift of City.

Arsenal have 30 points, ahead of Spurs on goal difference.

If matches were to finish at halftime this season, Arsenal would sit 19th but once again, their final 45 minutes turned a match on its head, as they came from 2-1 down at the break to get the better of Spurs at the Emirates Stadium.

Aubameyang’s penalty gave Arsenal the early lead from the penalty spot, before Spurs rallied with goals from Eric Dier and a Harry Kane penalty giving them the advantage before the break.

However, three goals from Alexandre Lacazette, Aubameyang again — with his 10th in the league this season, two more than any other player — and Lucas Torreira extended Arsenal’s unbeaten run to 19 games in all competitions under Unai Emery.

“It is a very big victory we showed our supporters and we gave them the victory because it is a very special match against Tottenham. For us, it is special also,” Emery said.

“We need to continue our process, creating our way. I want to do more.”

Looking for only their second win over their north London rivals in nine league matches, Arsenal, without Mesut Ozil in their squad, started at a blistering pace, and were soon in front.

Jan Vertonghen’s handball in the penalty area gifted Aubameyang the opportunity to score from the spot but Spurs levelled through Dier — a goal which sparked angry scenes on the touchline, as Spurs’ players clashed with Arsenal’s substitutes.

Kane became the joint-top goalscorer in north London league derbies in the Premier League era with eight before Aubameyang levelled the match once more with a strike of real quality.

Substitute Lacazette’s deflected effort put Arsenal in front once more, before Torreira’s first goal for the Gunners almost lifted the roof off the Emirates. 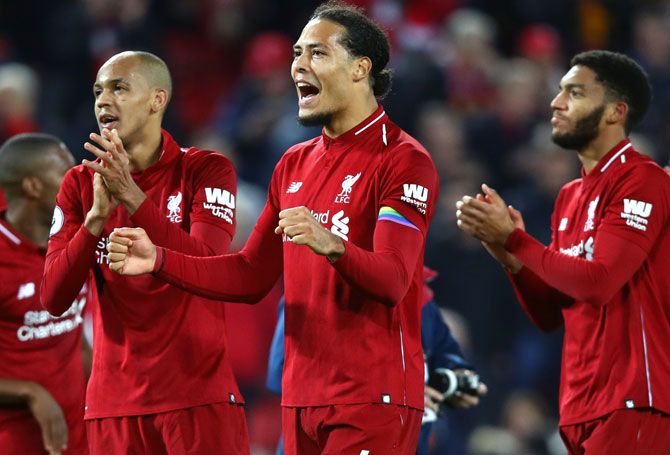 Everton looked to have done enough to secure a point but a horrendous error from goalkeeper Jordan Pickford gifted the ball to Origi, who headed it home in the sixth minute of stoppage time.

Chasing a first win at Anfield since 1999, Everton created the better of the openings in the first half, but found Liverpool goalkeeper Allison in inspired form. 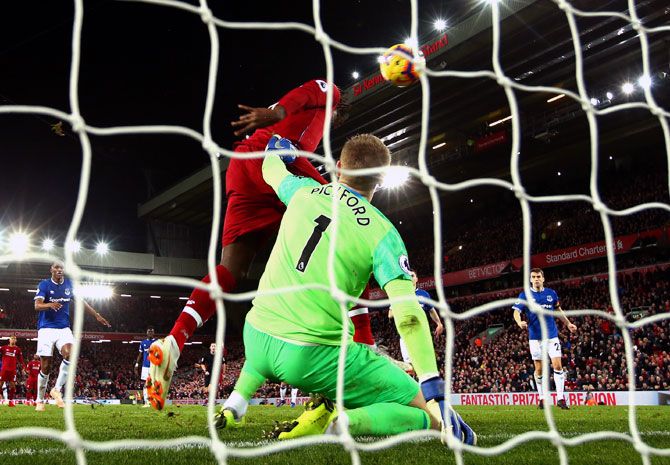 Liverpool upped the tempo after the break and twice went close through Mohamed Salah and Sadio Mane.

Origi, who came off the bench for his first league appearance of the season, saw an earlier close-range effort come out off the post, before he grabbed the headlines with the bizarre winner.

The goal sparked wild celebrations at Anfield with manager Juergen Klopp running on to the pitch. The win allowed second-placed Liverpool to close the gap on league leaders Manchester City to two points.

“The goal was lucky, of course, but our idea was clear: we wanted to win until the last second,” said Liverpool manager Juergen Klopp, who rushed on to the pitch to celebrate the winner, only to apologise for his actions later.

“We wanted to show that by bringing strikers on. It was a long and open game. I think we deserved the three points.”