IMAGES from the EPL matches played on Sunday. Harry Kane struck twice as Tottenham Hotspur dealt a huge blow to Leicester City's hopes of a top-four finish with a 3-0 victory in the Premier League on Sunday.

Leicester's James Justin deflected Son Heung-min's shot into his own goal after six minutes and Kane gave his side a commanding lead with two quality strikes before halftime.

England skipper Kane took his tally to four in two games after scoring twice in his side's 3-1 win at Newcastle United.

Leicester remain fourth but are level on 62 points with fifth-placed Manchester United who have two games left to play to Leicester's one. They meet on the final day of the season.

Spurs are finishing the season strongly, winning four of their last five games, and moved above Wolverhampton Wanderers into sixth place, closing in on Europa League qualification.

Relegation looms large for Bournemouth after home loss to Southampton 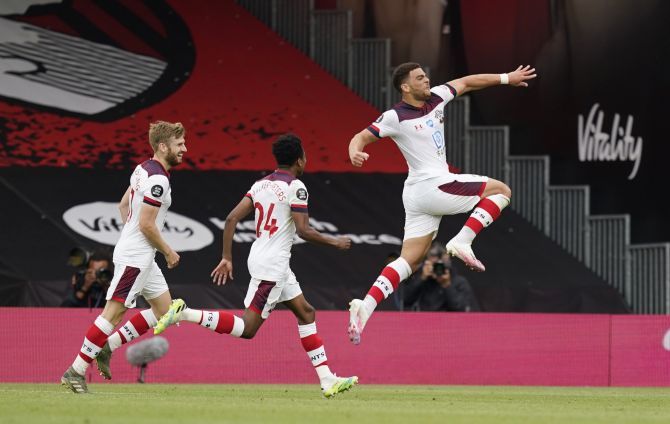 Bournemouth’s five-year Premier League residency was left hanging by a thread on Sunday after a 2-0 home defeat to Southampton left them three points adrift of safety with one game remaining.

Danny Ings scored his 21st goal of the league season and Che Adams added a second deep in stoppage time to hand the visitors victory in the south coast clash, after VAR ruled out a late goal for Bournemouth in a dramatic end to the game.

To stay up, Bournemouth must now win away at Everton next Sunday and hope that Watford lose both their remaining games at home to Manchester City on Tuesday and away at Arsenal on the last day of the league season. Watford have a goal difference of minus 23 while Bournemouth are on minus 27.

Watford are 17th in the standings with 34 points from 36 games while Bournemouth have 31 points from 37. They slipped to second from bottom after Sunday's defeat.

Ings, who started his career as a teenager at Bournemouth, struck home in the 41st minute to move to within two goals of the league’s top scorer, Jamie Vardy of Leicester City. But he had a second half penalty saved that would have put him just one behind in the golden boot race.

The goal came after a quick counterattack as his team mates set up an opportunity by finding him on the edge of the area and then pulling defenders out of position to allow the striker to come across onto his right-hand side and hit the ball into the corner of the Bournemouth net.

But he botched the 58th minute spotkick which was awarded after a nerve-jangling stoppage for a VAR check that showed Bournemouth’s Harry Wilson had handled in his own penalty area.

Ings hesitated as he took the kick, and did not hit it hard enough, allowing Aaron Ramsdale to make the save.

VAR was called on again five minutes into stoppage time when Bournemouth substitute Sam Surridge scored a potential equaliser from close range. But the video evidence showed teammate Callum Wilson was offside in the build-up and the goal was overturned.

There was further deflation for beleaguered Bournemouth as Adams made it 2-0 with virtually the last kick of the game as Southampton moved above Everton into 11th place.