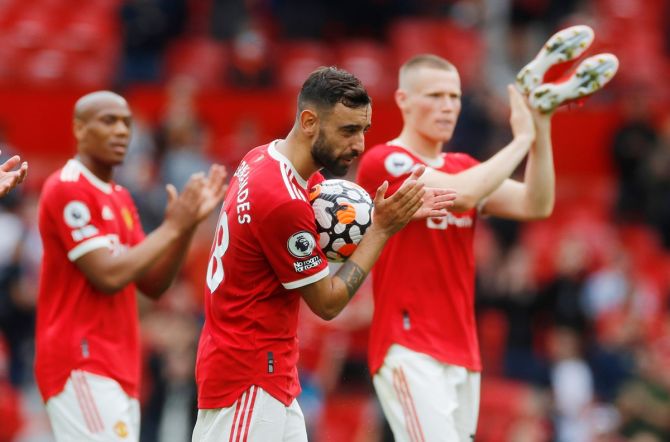 IMAGE: Bruno Fernandes celebrates his hat-trick with the match ball as Manchester United's players walk back after the Premier League match against Leeds United, at Old Trafford, on Saturday. Photograph: Phil Noble/Reuters

Bruno Fernandes fired in a hat-trick of goals in front of a raucous Old Trafford as Manchester United thrashed Leeds United 5-1 to get their Premier League season off to a flying start on Saturday.

Paul Pogba also starred with four assists - one more than he managed in the whole of last season in the league - to help United run riot in front of their first full crowd in 17 months.

Fernandes got the goal-scoring underway on the half hour mark, before a Luke Ayling thunderbolt out of nowhere levelled things up three minutes into the second half. 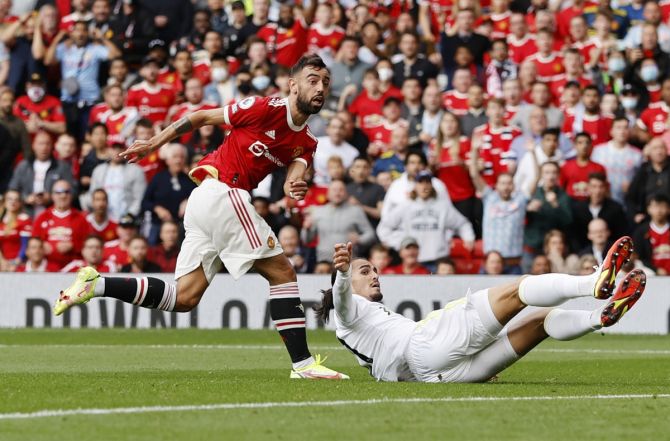 It was only a short reprieve for Leeds, however, as United livewire Mason Greenwood fired the hosts back in front before Fernandes added a quickfire third to put Ole Gunnar Solskjaer's side in command.

Fernandes completed his first United treble with another fine finish on the hour mark, before Brazilian midfielder Fred got in on the act to complete the rout and cap a memorable afternoon for the hosts, who laid down an early marker in the Premier League title race.

Liverpool cruise past Norwich in opener Liverpool eased into the new Premier League season as goals by Diogo Jota, Roberto Firmino and Mohamed Salah earned them a 3-0 victory at promoted Norwich City later on Saturday.

With defensive linchpin Virgil van Dijk back after nine months out with a serious knee injury, Liverpool enjoyed a relatively trouble-free evening at Carrow Road.

Norwich had their chances but once Jota gave Liverpool the lead in the 26th minute the visitors were in command.

Salah set up Firmino to make it 2-0 in the 65th minute and then sealed the points nine minutes later with a neat finish. 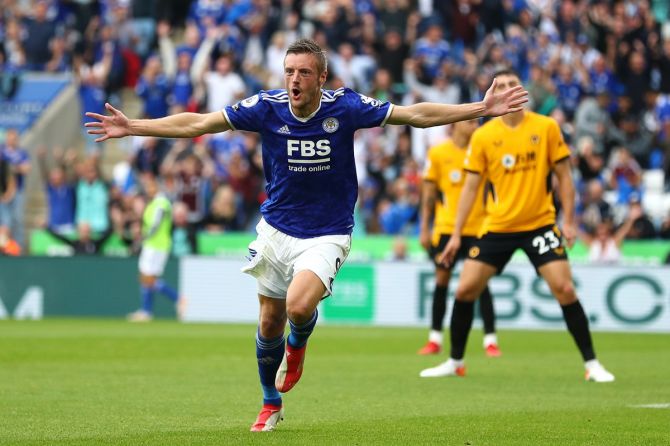 IMAGE: Jamie Vardy celebrates after scoring for Leicester City during the Premier League match against Wolverhampton Wanderers, at The King Power Stadium in Leicester, on Saturday. Photograph: Matthew Lewis/Getty Images

Leicester City got their Premier League campaign underway with a 1-0 home win over Wolverhampton Wanderers thanks to a trademark Jamie Vardy goal in the 41st minute at the King Power stadium.

The 34-year-old striker showed he is still a menace in front of goal as he popped up at the near post to delight the home fans, making up for an earlier strike that was disallowed for off-side.

Vardy netted five minutes after Adama Traore spurned a gilt-edged chance for Wolves when he raced clear of two markers from the halfway line before shooting wide with only Leicester goalkeeper Kasper Schmeichel to beat.

Wolves were swiftly punished as Ricardo Pereira weaved his way past two markers on the right flank and delivered a low cross to the edge of the six-yard box for Vardy to turn the ball into the top corner with a deft touch.

Leicester nearly grabbed a second on the stroke of half-time when midfielder Youri Tielemans had Wolves goalkeeper Jose Sa at full stretch with a swerving long-range effort before Wolves pegged back the home side in the second half.

Caglar Soyuncu denied the visitors an equaliser when he slid in to block a Francisco Trincao effort shortly after halftime before Vardy shot wide with Leicester looking dangerous on the break.

Wolves pressed hard late on but some desperate defending and last-gasp blocks kept them at bay with striker Raul Jimenez unable to make an impact after returning to action for the first time since November when he suffered a skull fracture.

Conor Coady had the ball in the back of the net for the visitors in the 89th minute but the goal was scrapped for off-side, handing new Wolves manager Bruno Lage a losing start in the Premier League. 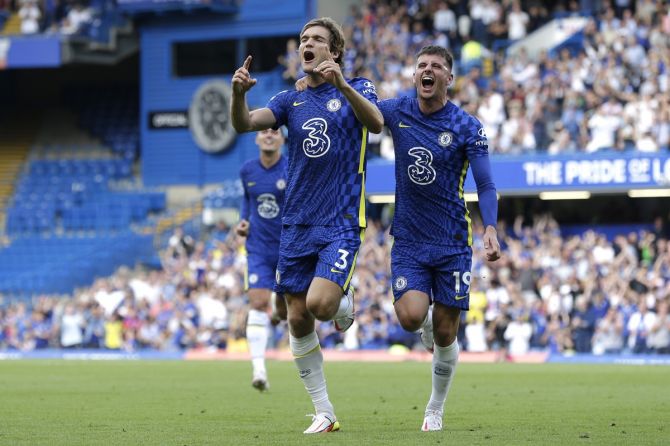 Chelsea eased to a 3-0 home win over a toothless Crystal Palace on Saturday as the European champions made a strong statement of intent in their opening game of the Premier League season.

Spanish left back Marcos Alonso fizzed a free kick into the top corner to put Chelsea in charge in the 27th minute while US forward Christian Pulisic followed up on the rebound to double their lead five minutes before halftime.

Chelsea's homegrown defender Trevoh Chalobah then completed a dream Premier League debut in the second half when he smashed a distance shot in off the post to score his first goal for the club he joined as an eight-year-old.

The defender, who has spent the last three seasons on loan in England and France, dropped to his knees after scoring to further delight the home fans in the biggest Stamford Bridge crowd since the coronavirus pandemic struck in March 2020, with more than 38,000 turning out.

The Chelsea faithful gloated of their status as Champions League holders throughout the game while Kai Havertz, scorer of the only goal in their victory in the final over Manchester City, was given a hero's reception when he came off the bench.

Club record signing Romelu Lukaku was not at the game as he is still observing coronavirus quarantine protocols after travelling to England from Italy following his 97.5-million-pound ($135 million) move from Inter Milan.

The Belgian, who fired Inter to the Serie A title last season with 24 league goals, will begin training on Monday and is set to make his second Chelsea debut away to Arsenal next Sunday. 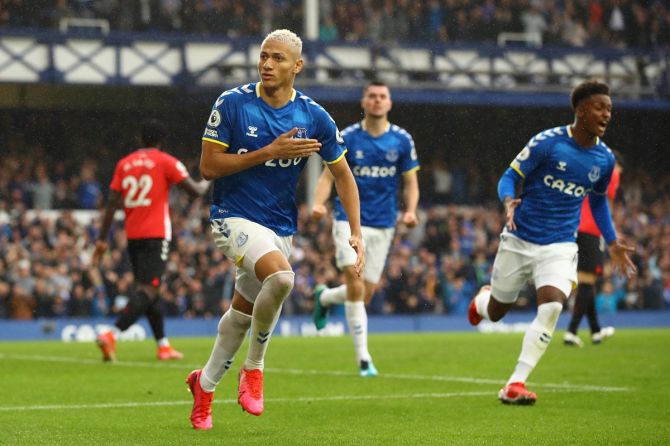 Everton rallied from a goal down to beat Southampton 3-1 in the Premier League as new manager Rafa Benitez enjoyed a winning start to his reign at Goodison Park.

Benitez's appointment was not a popular one on the blue half of Merseyside after his spell in charge of Liverpool and his side left the field to boos at halftime as they trailed to a goal by Adam Armstrong on his Southampton debut.

But whatever the Spaniard said at the break did the trick as Everton were a different proposition once Richarlison equalised from close range in the 47th minute.

Abdoulaye Doucoure's sublime finish put them ahead in the 76th minute before Richarlison set up Dominic Calvert-Lewin to make the points safe late on.

Benitez is the first manager to cross the Liverpool divide since the 1890s but was greeted warmly before kickoff and again at fulltime as a new chapter in his managerial career began.

After last season's struggles at home when Everton managed to win only six of 19 at Goodison, it looked like being a familiar tale when Armstrong scored after 22 minutes.

Everton defender Michael Keane was caught dawdling in possession by Che Adams who flicked the ball through to Armstrong who finished high past Jordan Pickford.

Armstrong, signed from Blackburn Rovers, was a handful in the first half as Southampton were good value for their lead while Everton were hesitant at the back and toothless up front.

But everything changed two minutes after the break when Andros Townsend headed a clearance back into the Southampton area and Richarlison, a week after helping Brazil win the Olympic final, poked home the equaliser.

Everton were much livelier after that and went ahead when Doucoure turned sharply in the penalty area before smashing a rising drive past Alex McCarthy.

Everton's fans were joyous a few minutes later when Richarlison did well down the right and his low cross was met by a diving Calvert-Lewin.