Manchester United and Arsenal's Premier League top-four hopes were hit by defeats on Saturday as Chelsea bounced back from their Champions League loss by scoring six goals at Southampton.

Leaders Manchester City host second-placed Liverpool on Sunday, leaving the focus of Saturday's games on the battle for the fourth Champions League spot.

United suffered a 1-0 loss to struggling Everton at Goodison Park while Arsenal were handed a surprise 2-1 home defeat by Brighton & Hove Albion.

The results were a major boost for Tottenham Hotspur after Son Heung-min struck a superbly taken hat-trick to enable them take a grip on fourth place in the Premier League, romping to a 4-0 win at Aston Villa later on Saturday. Villa had more possession and shots on target but it was the clinical finishing from Son and the Spurs front three that made the difference.

Son fired Spurs ahead in the third minute when a blocked shot from Harry Kane fell to him on the edge of the box and his first time, left-foot, shot flew in off the inside of the post.

The combination of wasteful finishing and inspired goalkeeping from Hugo Lloris ensured Spurs went in with their lead intact at the break and it was a different game after the restart.

Kane created the second for Spurs in the 50th minute, flicking on a long ball into the path of Dejan Kulusevski who burst into the box and beat Emiliano Martinez with a low shot.

There was a similar pattern to the third goal with Kane cleverly flicking on another long pass into the stride of Son, who ran goalwards before providing a clinical finish to make sure of a fourth win in a row for Spurs.

Son completed his hat-trick in the 71st minute when, from the right flank, he found Kulusevski inside and the Swedish forward unselfishly returned the pass to the South Korean who drilled home off the post.

Arsenal are also on 54 points with West Ham United and Manchester United both on 51 points.

Out of all cup competitions, United needed a victory at Frank Lampard's struggling Everton to kick-start their bid to return to the Champions League.

But after a promising start from the visitors, it was Everton who grabbed the lead through Anthony Gordon's shot which deflected off Harry Maguire and beat the wrong-footed David De Gea in the United goal.

Everton, whose defeat at Burnley in midweek had left them a point and a place above the relegation zone, showed real grit and determination to hang on to their lead while United looked totally lacking in a coherent game plan.

A late Cristiano Ronaldo effort was as close as United came to an equaliser as they slipped to a loss that left English football's most successful club languishing seventh in the table.

Everton defended for their lives at the death, hanging on for a precious victory that helped them pull four points clear of 18th-placed Burnley, who travel to Norwich City on Sunday.

"I don't know what to say, to be honest.

"We're not good enough, that's for sure. It's going to be very difficult now to be in the top four.

"Of course, it's not the perfect atmosphere. They were tired, they were nervous, but they keep going and keep fighting. They had more desire than us, which is not acceptable. It's very sad to lose today."

IMAGE: Arsenal's Gabriel Martinelli scores a goal which was later disallowed by VAR for an offside during their match against Brighton & Hove Albion at Emirates Stadium in London. Photograph: Mike Hewitt/Getty Images

Brighton opened the scoring when a long ball found Mwepu on the flank and he picked out Leandro Trossard who curled past Aaron Ramsdale.

Arsenal made tactical shifts that showed signs of turning the game around but they were dealt a decisive blow when Mwepu drilled home a half-volley from the edge of the box.

Martin Odegaard provided a late slither of hope in the 89th minute with a long-range shot that took a wicked deflection and looped over goalkeeper Robert Sanchez to give Arsenal a lifeline, but Brighton held on.

Chelsea manager Thomas Tuchel was furious with his team's performance in their 3-1 loss at home to Real Madrid in the Champions League but get the desired reaction from his players.

Two goals each by Timo Werner and Mason Mount and first- half strikes by Marcos Alonso and Kai Havertz sealed a 6-0 demolition job at St Mary's Stadium.

Chelsea went up 1-0 in the eighth minute as Alonso ran on to a deft flick by Mount and blasted in his first league goal since the opening day of the campaign.

Mount, Chelsea's leading scorer in the league this season, equalled his tally of nine goals from the previous campaign with a superb shot from outside the box after Southampton's shaky defence failed to deal with Ruben Loftus-Cheek's cross.

Werner made up for earlier misses by beating Jan Bednarek for pace before rounding Fraser Forster and finishing into an empty net and Havertz swept in Chelsea's fourth.

A relentless Chelsea were rewarded again after the break as Werner tapped in a rebound from N'Golo Kante's effort which was saved by Forster and Mount completed the rout.

Marsch has had a positive impact at the Yorkshire club since taking over from Marcelo Bielsa and goals from Raphinha, Rodrigo and Jack Harrison condemned the hosts to a ninth straight home defeat.

Leeds are in 16th place with 33 points. Watford are 19th with 22 points, six points from safety.

© Copyright 2022 Reuters Limited. All rights reserved. Republication or redistribution of Reuters content, including by framing or similar means, is expressly prohibited without the prior written consent of Reuters. Reuters shall not be liable for any errors or delays in the content, or for any actions taken in reliance thereon.
Related News: Man United, Everton, David de Gea, Goodison, Anthony Gordon
COMMENT
Print this article 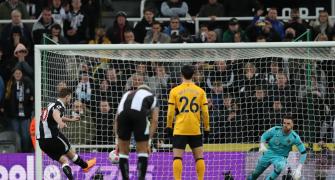 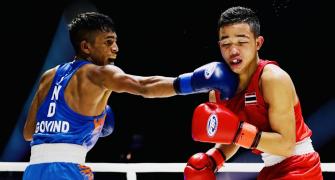 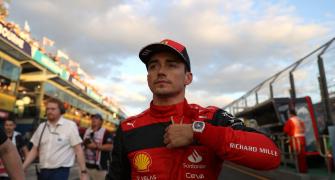 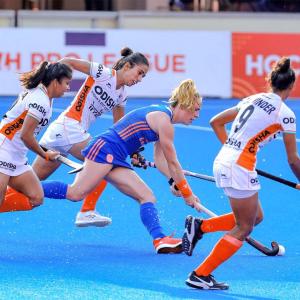