A summary of Sunday's action in the Premier League. A dominant second-half performance earned Chelsea a 3-0 win at Tottenham Hotspur thanks to goals by Thiago Silva, N'Golo Kante and Antonio Rudiger as the Blues moved joint top of the Premier League on Sunday.

The emphatic scoreline did not look likely in the first-half as the hosts shaded it, but Chelsea took complete control after the break to send out an ominous warning in the title race.

Thiago's header gave Chelsea the lead in the 49th minute and when substitute Kante's deflected shot crept past Spurs keeper Hugo Lloris shortly after there was no way back for the hosts.

Rudiger's late strike was enough to give Chelsea an identical record to Liverpool with the two sides on 13 points from five games, both having scored 12 goals and conceded one.

On the day Tottenham mourned the passing of Jimmy Greaves, the club's greatest-ever scorer, their modern-day goal machine Harry Kane had another disappointing day and is yet to add to his 166 league goals for the club this season.

After winning their first three Premier League games of the season 1-0 to lead the table, Totenham have now suffered back-to-back 3-0 reverses and have slipped to seventh. Tottenham manager Nuno Espirito Santo handed a first league appearance of the season to powerful midfielder Tanguy Ndombele and he impressed in a first half in which the hosts' energetic football kept Chelsea on the back foot.

Spurs had a series of half chances and wasted a great opportunity when Son Heung-min's pass released Sergio Reguilon down the left but the Spanish full back could not pick out either of two team mates who were waiting in the area.

Son also had a fleeting chance when picked out by Giovani Lo Celso, yet despite Tottenham's impressive play there was always the sense that Chelsea had much more in the tank.

And so it proved.

Straight after the restart, Marcos Alonso's stretching volley forced Lloris into his first save of the match and a couple of minutes later Alonso swung over a corner that Thiago met with a powerful downward header that gave Lloris no chance.

All the belief Spurs had shown suddenly evaporated and they found themselves with a mountain to climb in the 57th minute as Kante's shot took a cruel deflection off Eric Dier's foot and dribbled into the corner off the post with Lloris wrong-footed.

Chelsea looked hungry for more goals and they got their third when Timo Werner picked out central defender Rudiger and he dispatched a low shot into the bottom corner. Substitute Lingard hit a thumping shot into the top corner in the 89th minute against his former club but West Ham were awarded a penalty moments later for a handball by defender Luke Shaw.

Mark Noble stepped up to take the penalty immediately after coming off the bench but De Gea guessed correctly and dived to turn his spot-kick away.

West Ham had gone ahead on the half-hour mark with a deflected strike from Said Benrahma but the visitors responded five minutes later, Cristiano Ronaldo heading a Bruno Fernandes cross at Lukasz Fabianksi and following up to tap the ball into the net. It was Ronaldo's fourth goal in three games after netting twice on his second debut for the club against Newcastle United and once in the 2-1 Champions League defeat at Young Boys on Tuesday.

The Portuguese had a chance in the second half before Lingard's strike when he was again played in by Portugal team mate Fernandes but Fabianksi thwarted the attempt with his legs.

Ronaldo was also denied a penalty following a challenge from Vladimir Coufal.

Manchester United are second in the Premier League standings with 13 points from five games while West Ham have eight after suffering their first defeat of the season. Brighton & Hove Albion secured a 2-1 home win over Leicester City, thanks to a controversial penalty and a Danny Welbeck header that put them third in the Premier League despite Jamie Vardy's 150th goal in his 250th game for the Foxes.

The hosts went ahead after 35 minutes when Leicester's Jannik Vestergaard was adjudged to have handled the ball and despite the replay showing he was being fouled by Neal Maupay the decision stood, with Maupay blasting home the spot-kick.

Welbeck made it two five minutes after the break, stealing in behind Vardy to score with a glancing header form a free-kick, but Vardy was not ready to let the game go. The striker pulled one back for Leicester in the 61st with a close-range finish after a delightful ball from Youri Tielemans and the visitors surged forward looking for an equaliser.

The Foxes had the ball in the net twice more before the final whistle but both times Harvey Barnes was judged to be in an offside position as the home side hung on to win.

The victory lifted Brighton to provisional third spot on 12 points, one behind leaders Liverpool and Manchester United, though they could be overtaken if Chelsea win at Tottenham Hotspur later on Sunday.

Leicester are 12th on six points. 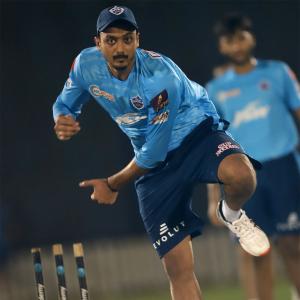