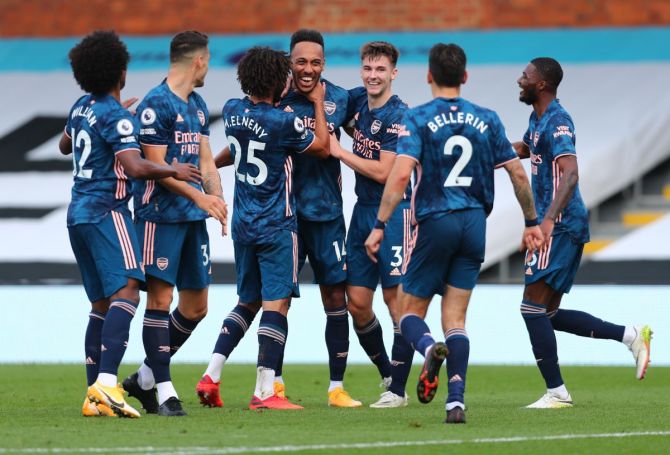 Arsenal got their Premier League campaign underway with a 3-0 win at promoted Fulham thanks to goals from Alexandre Lacazette, new signing Gabriel and captain Pierre-Emerick Aubameyang in the opening game of the season on Saturday.

Lacazette fired the Gunners ahead in the eighth minute after poor defending by the home side before new signing Gabriel made it 2-0 in the 49th and Aubameyang put the icing on the cake with a superb shot into the top corner.

Right back Denis Odoi forced a save from Arsenal keeper Bernd Leno early on but that was as good as it got for Fulham, whose opening-day performance suggests that staying in the top flight could be a tall order. 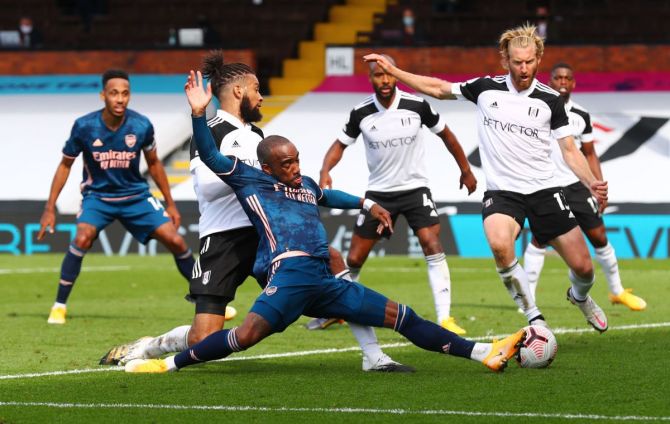 IMAGE: Arsenal's Alexandre Lacazette is challenged by Fulham's Michael Hector and Tim Ream as they vie for possession. Photograph: Clive Rose/Pool via Reuters

Lacazette was left with the simple task of poking the ball in from close range after a comedy of errors by the home side, who enjoyed a slice of good fortune when Willian hit the post with a 22nd-minute free kick.

Brazilian defender Gabriel, who joined Arsenal from Ligue 1 side Lille, made it 2-0 with a thumping header after a corner swung in by Willian, who enjoyed a fine debut after his summer move from cross-town rivals Chelsea.

Aubameyang put the icing on the cake in the 57th minute with a rasping shot from inside the penalty area and Arsenal missed several chances in the closing stages to win by an even bigger margin at Craven Cottage. 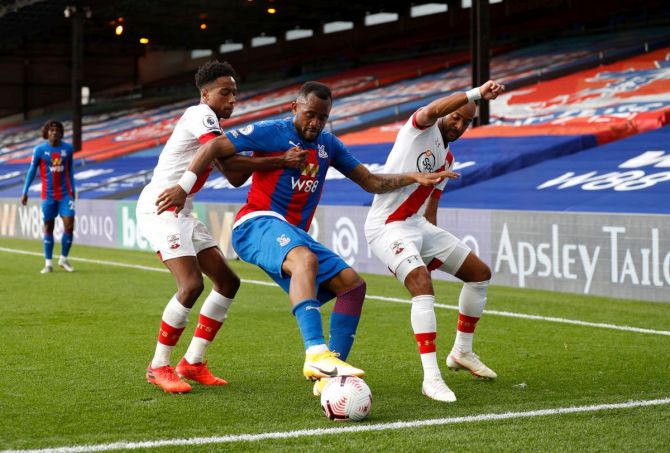 Crystal Palace forward Wilfried Zaha scored his 50th league goal for the club as they beat Southampton 1-0 on Saturday to secure a home victory on the opening day of a Premier League campaign for the first time.

The hosts went ahead against the run of play as Zaha, who had managed only one goal in his previous 21 games, met Andros Townsend's pin-point cross from the right with a side-footed volley past goalkeeper Alex McCarthy in the 13th minute.

"We finished last season on the wrong foot. We've been working in pre-season to make sure we start in a different manner. The performance and points were very important going forward," Palace captain Scott Dann told the BBC.

Zaha, so often Palace's talisman during previous seasons but coming off a disappointing 2019-20 campaign in which he netted only four league goals, looked dangerous throughout the first half as Southampton left far too many gaps at the back.

Ralph Hasenhuettl's side responded by increasing their intensity in attack and had two quick chances immediately after the restart, but both Nathan Redmond and Che Adams were unlucky not to get the ball past the impressive Vicente Guaita in goal.

Kyle Walker-Peters, who joined Southampton from Tottenham Hotspur in the close season, was then shown a straight red for a high challenge before referee Jon Moss changed it to a yellow following the intervention of the Video Assistant Referee (VAR).

Zaha thought he had doubled Palace's tally late into the contest with a neat run and finish, only for the VAR to rule out his effort as he was offside in the build-up.

Guaita, who earlier denied Adams with a superb save, came to Palace's rescue again moments after Zaha squandered another late chance, as he blocked Danny Ings' header in added time.

"In the end we weren't quick enough and did not stretch our opponents enough," Hasenhuettl said. 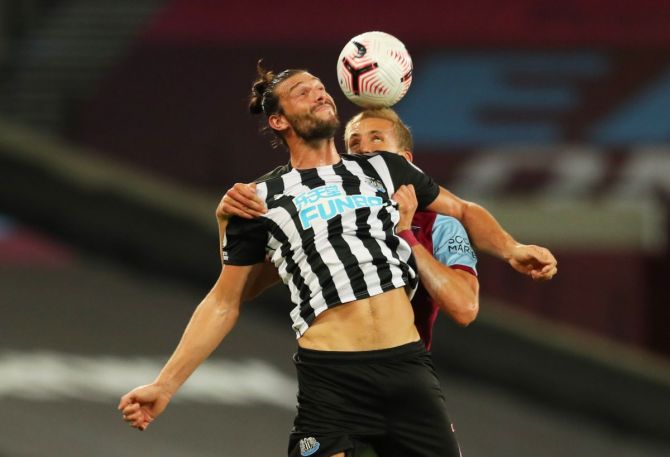 Goals on their Newcastle United debuts by striker Callum Wilson and Jeff Hendrick gave their side a comfortable 2-0 away win over West Ham United in their Premier League opening-day clash on Saturday.

West Ham hit the woodwork twice during a goalless first half but Wilson, Andy Carroll and Jonjo Shelvey also went close for the visitors before the break.

Signed on Monday for a reported 20 million pounds ($25.59 million) from Bournemouth, Wilson pounced on Hendrick's clever flick-on from Javier Manquillo's cross to put Newcastle ahead in the 56th minute.

Manquillo almost set up Wilson for a second in the 75th minute but this time the 28-year-old forward couldn't quite get on the end of the low cross and the ball was cleared.

Instead it was Hendrick, who joined on a free transfer from Burnley in August, who wrapped up the three points for Newcastle as he received the ball from Miguel Almiron and rattled home a shot three minutes before the end of normal time.

"From day one, the lads have made me feel welcome and I was just raring to get going," a delighted Hendrick said.

"You see in training the squad that is here. The strikers can all score and all bring different qualities to the team. We had to dig deep and work hard for it," he added.

Wilson was equally pleased to get off the mark.

"I'm thankful for the goal, but first and foremost it was a great team performance, solid at the back, and that's what gave us that platform to go and express ourselves in the final third," he said.

West Ham midfielder Declan Rice, who has been linked to a move to London rivals Chelsea, was highly critical of his side's performance, saying it harked back to last season's struggle against relegation.

"I don't think we could have played any worse to be honest. We were poor as a team and individually," he said.

"There is no time to play poor in the Premier League. We had a dip last year and found ourselves in the deep end and it was not enjoyable."

West Ham manager David Moyes will have plenty to think about before they travel to Arsenal next Saturday, while Newcastle host Brighton & Hove Albion on Sunday.