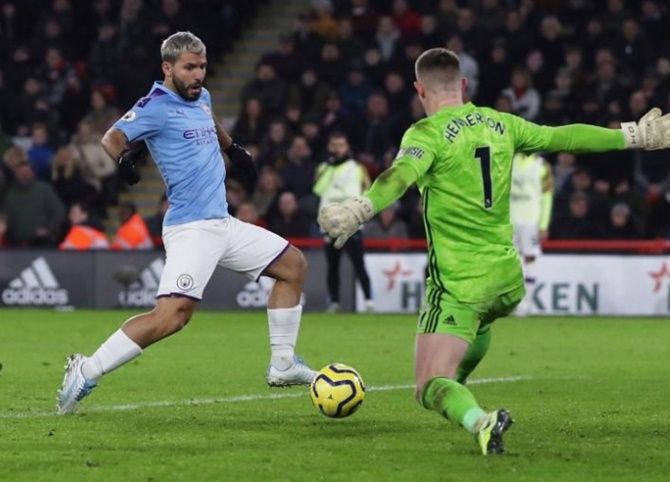 Manchester City’s Sergio Aguero came off the bench to grab a 73rd-minute winner as they solidified their grip on second place in the Premier League with a hard-fought 1-0 victory at Sheffield United on Tuesday.

City’s Brazilian striker Gabriel Jesus had a first-half penalty saved by Dean Henderson and the keeper, on loan from Manchester United, also produced a fine save to keep out a Raheem Sterling effort.

Aguero was sent on to replace Jesus in the 67th minute and it did not take long for him to make an impact as his perfectly-timed run into the box was picked out immaculately by Kevin De Bruyne, leaving the Argentine with a simple tap-in.

It was the sixth goal in three games for City’s all-time top scorer and came moments after United had gone close to taking the lead with Oli McBurnie just unable to reach a low ball with his slide at the back post.

“Sergio is on fire right now. Strikers need momentum. It’s good for us to have strikers in this form,” said City manager Pep Guardiola.

“I am so happy with the team. I know what it’s like to play here, it is a tough, tough place. We controlled it well and in the end we created chances to win,” he said.

“It was an incredibly good victory for us to take a step towards securing Champions League football next season,” added the Spaniard, whose side are on 51 points, 13 behind leaders Liverpool, who have two games in hand.

Guardiola had defender Aymeric Laporte back in his lineup for the first time since he suffered a knee injury in August. The Frenchman was replaced 12 minutes from time.

“We knew that Aymeric couldn’t play for 90 minutes, that’s why we played five at the back to protect him a little bit. He’s a crucial player for us, we’ve missed him, it’s good for us to have him back,” said Guardiola.

Sheffield United once again showed their quality with a determined and positive display and despite the loss the promoted side remain in seventh place on 33 points.

“Kevin de Bruyne has found an amazing pass and the movement of Sergio Aguero, he’s done that to everyone in Europe and the world. It’s a great finish. After that we’re behind and it’s double difficult for us,” said United manager Chris Wilder.

“I’ve got nothing but an enormous amount of pride for my team. We went toe-to-toe with them. When opportunities arise you have to show a little bit of quality and we didn’t do that sadly.

“Games are like this are what we’re here for. We’ve worked really hard to get here, we want no regrets and I don’t think there were tonight.” 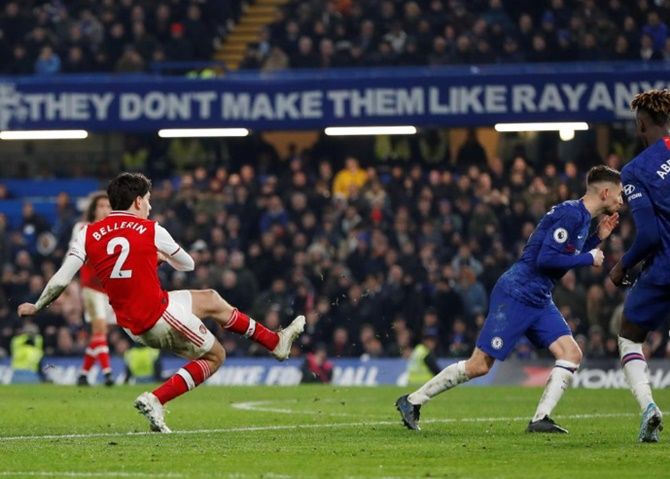 Hector Bellerin grabbed a last-gasp equaliser for 10-man Arsenal in a 2-2 draw against Chelsea at Stamford Bridge on Tuesday as the visitors recovered from a first-half David Luiz red card to peg back the Blues twice in a pulsating London derby.

Top-four chasing Chelsea, seeking to put a stop-start run of performances behind them, started on the front foot and went ahead with a penalty by Jorginho in the 28th minute after Tammy Abraham pounced on a misplaced back pass by Arsenal defender Shkodran Mustafi and was brought down by Luiz.

The Brazilian - whose only other red card in the Premier League came when he was playing for Chelsea against Arsenal at Stamford Bridge in 2017 - was dismissed by referee Stuart Attwell before Jorginho stroked home from the spot.

But they once again failed to turn their possession into more goals and they paid for it in the 63rd minute when Gabriel Martinelli set off on a run from deep in his own half. He skipped past N’Golo Kante as the French midfielder slipped and fired past advancing Chelsea goalkeeper Kepa Arrizabalaga.

Chelsea, who lost 1-0 on Saturday away to Newcastle United despite also dominating that match, looked stunned at their latest setback before captain Cesar Azpilicueta stabbed home a cross by Hudson-Odoi in the 84th minute.

Arsenal refused to give up and their captain Hector Bellerin wrong-footed two defenders to create the space to score three minutes later with a curling low shot.

The result left Chelsea in fourth place, six points ahead of Manchester United and Wolverhampton Wanderers who have both played a game less. Arsenal remain in 10th place, 10 points behind Chelsea.

Chelsea coach Frank Lampard said his side were still struggling to turn their creativity into goals and had failed to follow their defensive instructions.

“We’re in fourth position which is pretty good, but I know and we know there should be another 10 points on the board at least,” Lampard told reporters. “All of us need to look at those final details.”

New Arsenal manager Mikel Arteta said he told his players at the break that they could weather the storm after Luiz’s dismissal.

“I sensed at halftime that they believed they could get back in the game,” he said. “I wasn’t expecting Hector to score with his left foot.” 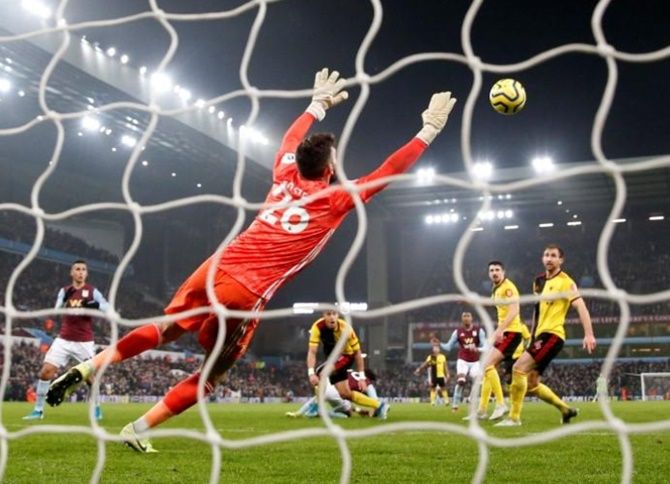 Aston Villa scored with almost the last kick of the game to seal a 2-1 comeback win over Watford at Villa Park on Tuesday that lifted Dean Smith’s men out of the Premier League relegation zone - and dumped Nigel Pearson’s men back in it.

The last-gasp win lifted Villa to 16th place in the table with 25 points from 24 games. By contrast, Watford, who had hauled themselves out of the relegation zone with a string of wins since Pearson’s arrival in December, dropped back to 19th on 23 points.

With the game tied at 1-1, the Birmingham side had been set to drop a place in the table while Watford would have climbed one.

But they swapped places when, after a goalmouth scramble in the 95th minute, the ball fell to Ezri Konsa who struck a fierce shot which took a deflection off team mate Tyrone Mings and sailed in to give the hosts what could be a pivotal victory in their bid to stay up.

“The lads showed plenty of endeavour, kept pushing and got the result tonight. It’s a big win, we know there are big games to come and every game is tough,” Smith told the BBC.

“It does give the players a lot of belief.”

Watford had opened the scoring in the 38th minute when Gerard Deulofeu dashed towards the goal line, spun to his left and chipped the ball over towards Troy Deeney who headed powerfully past Villa goalkeeper Pepe Reina from close range.

The home side, playing without a recognised striker for the fourth straight match due to injuries to Wesley Moraes and Keinan Davis, dominated possession and kept pushing forward, with Jack Grealish in particular looking lively.

Villa’s work paid off in the 68th minute when Watford keeper Ben Foster parried a Matt Targett shot from a tight angle back across the goal and into the path of substitute Douglas Luiz who blasted the ball into the roof of the net.

Despite decent chances for both sides, the game had been looking set to end all square until Reina launched the ball up the field for a final Villa push that led to Konsa’s shot.

The 22-year-old defender appeared to have scored his first ever goal for Villa, but due to the heavy deflection off Mings the goal instead was attributed to his England international team mate. 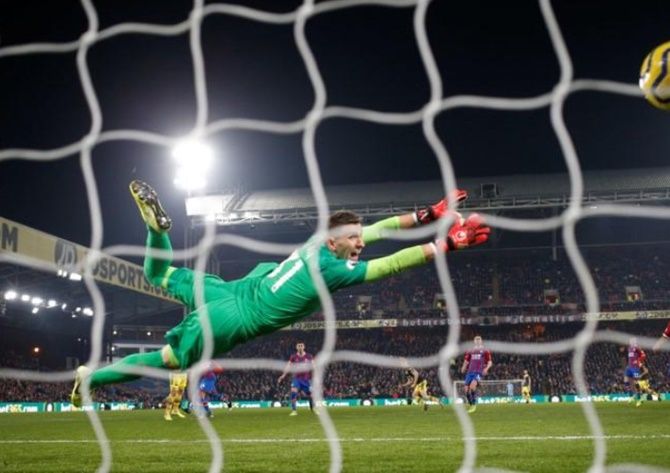 Southampton got their Premier League revival back on the rails after a weekend wobble as superb goals by Nathan Redmond and Stuart Armstrong earned them an impressive 2-0 victory at Crystal Palace on Tuesday.

Ralph Hasenhuttl’s side had a let-off when Cenk Tosun wasted an early chance for Palace but took the lead in the 22nd minute when Redmond smashed home from the edge of the area after leaving Palace’s defence trailing.

Armstrong made it 2-0 in the 48th minute, curling past Vicente Guaita after collecting Redmond’s pass.

Palace did improve but Southampton, who threw away a 2-0 lead to lose 3-2 to Wolverhampton Wanderers on Saturday, were solid as they claimed a fourth successive away league win.

Southampton have now won five of their last seven league games and have moved from the relegation zone after 17 matches played to the top half of the table after 24, just three points behind fifth-placed Manchester United.

“I think it was one of our best performances of the season,” Hasenhuttl said. “It’s not so easy to win here.

“In the second half it was important that we did not make the same mistakes as we did against Wolves, but we were very clinical and came up with a beautiful goal from Armstrong.”

Palace produced a remarkable display to draw away at Manchester City on Saturday but Roy Hodgson’s side looked heavy-legged and struggled to deal with Southampton’s pace.

With no FA Cup tie at the weekend they will not be in action again until Feb. 1 and Hodgson hopes his players can recharge.

“I think it was a game too far for us,” he said. “We have been battling with the same group of players.

“We have had tough games, battled through brilliantly, but that all caught up with us today and we deserved to lose the game because Southampton were the better team.”

After Redmond’s superb finish Saints should have added to their lead before the interval with Palace keeper Guaita making several interventions.

Armstrong did finally reward Southampton’s dominance and this time there was to be no collapse by the south coasters.