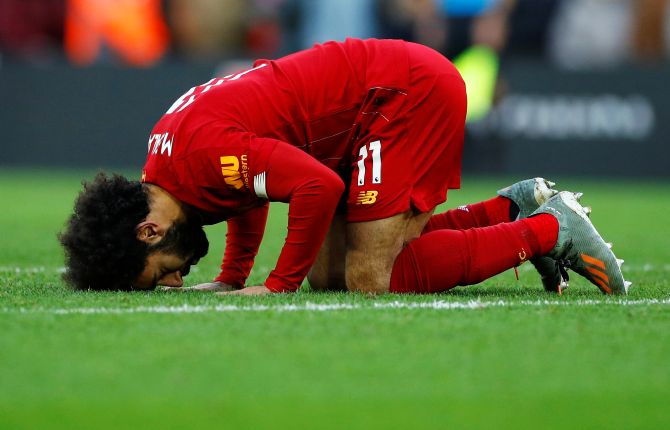 Liverpool forward Mohamed Salah kept up his scoring streak against Watford with a brace as the Premier League leaders sealed a 2-0 victory over the bottom club at Anfield on Saturday.

The win restored Liverpool's 11-point advantage over second-placed Leicester City, who host Norwich City later in the day, while Watford's fourth defeat in five games left new manager Nigel Pearson's side rooted to the bottom of the table.

Liverpool took the lead with a typically lethal counter-attack in the 38th minute as Sadio Mane collected the ball on the left and released Salah, who sprinted towards goal before cutting in and curling a shot home with his right foot.

Mane thought that he had doubled the lead five minutes after the break but the Video Assistant Referee (VAR) showed he was marginally offside when nodding the ball in from Xherdan Shaqiri's whipped cross.

Salah then scored his eighth league goal against Watford in five matches with a brilliant back-heeled flick in added time with his weaker right foot again to secure three points for Juergen Klopp's side.

"We played a tough team today -- the way they played, they should not be where they are in the table," Salah told BT Sport.

"We have experience in playing out games, I think sometimes the crowd gets nervous when we have only scored once, but we are always confident of working towards the win." 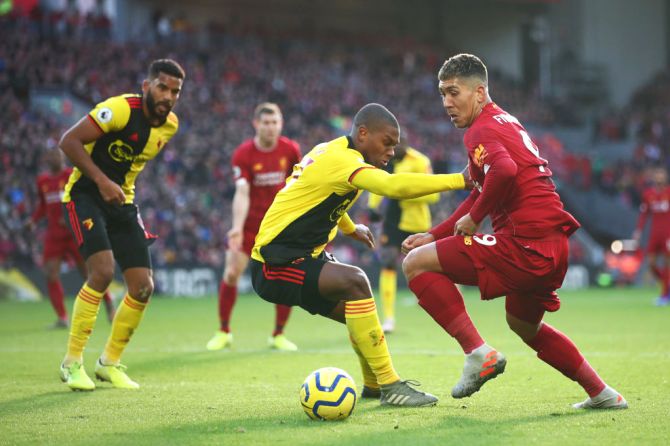 The visitors had earlier missed the chance to go ahead when Abdoulaye Doucoure mishit his shot after Etienne Capoue escaped the offside trap to set him up.

Watford had scored only nine goals in the league coming into this match, and the reason for that became evident when poor finishing cost them yet again as an unchallenged Ismaila Sarr scuffed his shot after goalkeeper Alisson Becker parried away Gerard Deulofeu's cross.

There were some positives for Pearson, Watford's third manager of the season following the sacking of Quique Sanchez Flores this month and Javi Gracia earlier in the campaign, as the Hornets created a number of chances in the second half.

The lively Deulofeu found himself one-on-one with Alisson but the Brazilian stopped the Spaniard's shot in the 54th minute and also denied Sarr the opportunity to equalise.

Watford also hit the post from the corner after a poor back pass from Dutchman Virgil van Dijk nearly beat his own keeper.

Left back James Milner, who switched to a midfield role after Georginio Wijnaldum was substituted, said the blustery conditions made life tough.

"The wind was difficult and it made it tough. Sometimes you have to play the game to the conditions... it's the same for both teams but the battle made it important to get three points." 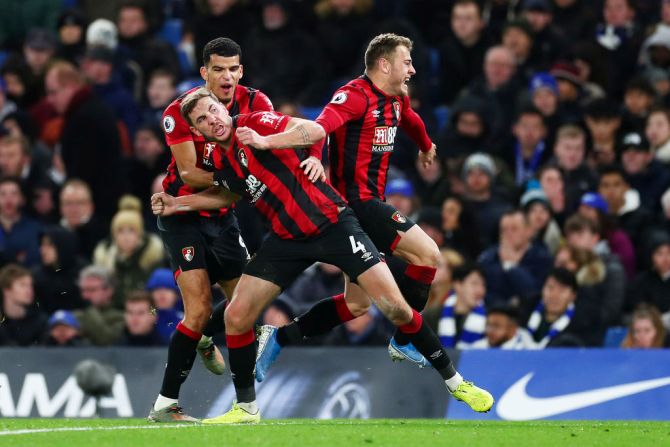 Defiant Bournemouth stole all three points with a late goal from Dan Gosling at Chelsea in the Premier League on Saturday, ending a five-match losing streak with a 1-0 win.

Gosling looped his shot over goalkeeper Kepa Arrizabalaga's head in the 84th minute, and defender Cesar Azpilicueta hooked it out, but after a lengthy wait for a VAR offside check referee Graham Scott awarded the goal.

Chelsea, who qualified for the Champions League knockout stages with a nervy 2-1 home win against Lille on Tuesday, looked off the pace despite enjoying more than 60% possession on a chilly afternoon in southwest London.

Although they buzzed around the Bournemouth area and created chances for Tammy Abraham, Mason Mount and Christian Pulisic, Frank Lampard's side could not find a decisive shot.

Bournemouth keeper Aaron Ramsdale pulled off fine saves in each half from Mount and full back Emerson to keep the south coast side in the game.

It was the fourth defeat in five Premier League games for Chelsea, who sit fourth in the table. Lampard suggested during the week that the club would be looking for a striker in the January transfer window. 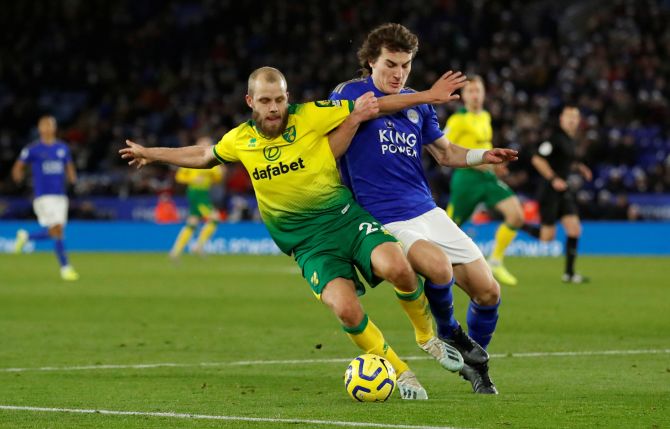 Norwich City boosted their hopes of avoiding relegation from the Premier League after a spirited performance saw them hold high-flying Leicester City to a pulsating 1-1 draw on Saturday.

The result snapped Leicester's eight-match winning streak, leaving them second in the table on 39 points from 17 games, 10 behind runaway leaders Liverpool who marched on with a 2-0 home win over Watford in the lunchtime kick-off.

Teemu Pukki gave Norwich a 25th minute lead with a clinical finish before visiting keeper Tim Krul scored an own goal in the 37th, failing to clear a Jamie Vardy header as the league's top scorer got on the end of a James Maddison corner.

Both sides came close in the opening exchanges as Krul tipped a Youri Tielemans shot on to the woodwork before Pukki fired wide from a good position barely a minute later.

Vardy missed a pair of gilt-edged chances to complete Leicester's comeback before the home side were twice let off the hook in the closing stages.

Livewire Pukki saw a shot blocked by Ricardo Pereira and the home team's centre back Caglar Soyuncu cleared a Christoph Zimmermann effort off the line from the resulting corner. 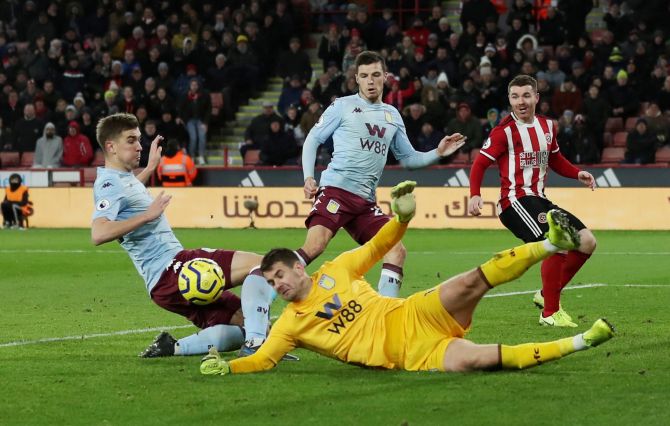 A superb second-half double by midfielder John Fleck sent Sheffield United up to fifth in the Premier League with a 2-0 home win over fellow promoted side Aston Villa, whose captain Jack Grealish missed a second-half penalty.

After a dull first period, the hosts burst into life five minutes into the second half with a brilliantly-worked opener, Chris Basham back-heeling the ball to John Lundstram who fired it across the box for Fleck to lash home from close range.

The build-up play for Fleck's second goal was equally impressive as the Blades worked the ball in from the left before striker David McGoldrick, who has yet to score this season, hooked a pass over his shoulder for Fleck to net with ease.

"Finishing is something I've worked on over the last couple of years and thankfully I am now getting my rewards," Fleck told the BBC. "David McGoldrick has been amazing for us, I am sure his goal will come but he keeps creating chances."

Villa were thrown a potential lifeline when the video assistant referee (VAR) called play back to award them a penalty for handball, but Grealish thumped his spot kick off the crossbar and the ball was cleared by Lundstram.

With tough games against fellow strugglers Southampton, Norwich City and Watford to come over the busy Christmas period, that penalty miss seemed to knock the stuffing out of Villa as they slumped to their third league defeat in a row.

Sheffield United have 25 points from 17 games, while Villa are on 15 and will drop into the bottom three if Southampton draw or win at home to West Ham United in the late kickoff.

Before the season began, few would have expected to see United occupying a European place approaching the halfway point, but Fleck was not getting carried away.

"We just need to keep the run going as much as we can and keep working hard. We know there will be bumps in the road but we keep going and see where it takes us," he said.

© Copyright 2020 Reuters Limited. All rights reserved. Republication or redistribution of Reuters content, including by framing or similar means, is expressly prohibited without the prior written consent of Reuters. Reuters shall not be liable for any errors or delays in the content, or for any actions taken in reliance thereon.
Related News: Watford, Mohamed Salah, Liverpool, Nigel Pearson, Gerard Deulofeu
SHARE THIS STORYCOMMENT
Print this article 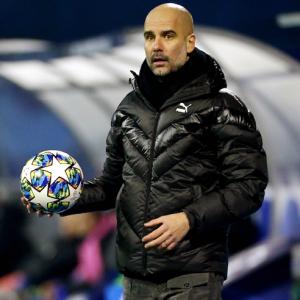 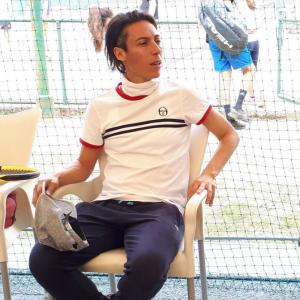