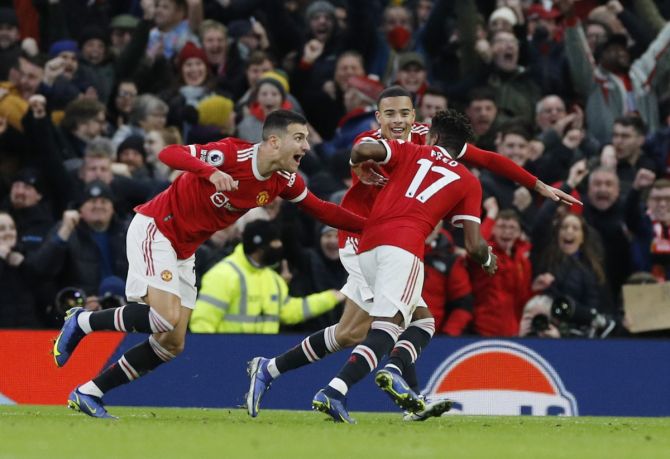 IMAGE: Fred celebrates with Mason Greenwood and Diogo Dalot after scoring what turned out to be the match-winner for Manchester United in the Premier League match against Crystal Palace, at Old Trafford, Manchester, on Sunday. Photograph: Phil Noble/Reuters

Brazilian midfielder Fred curled in a 77th-minute winner as Ralf Rangnick made a winning start as Manchester United's interim manager with a 1-0 Premier League win over Crystal Palace at Old Trafford on Sunday.

United had struggled to create clear chances against Patrick Vieira's well-drilled side but the oft-criticised Fred beat Vincente Guaita with a wonderful strike from the edge of the box after being set up by substitute Mason Greenwood.

Palace should have gone ahead minutes earlier but Jordan Ayew missed from point-blank range at the back post after James Tomkins had headed down a corner.

Cristiano Ronaldo started and played the full game, but was not allowed a clear look at the Palace's goal.

German Rangnick was leading United for the first time after taking over from caretaker manager Michael Carrrick on Friday.

United moved up to sixth place in the table on 24 points, three behind fourth-placed West Ham United.

Spurs rise to fifth with easy win over Norwich 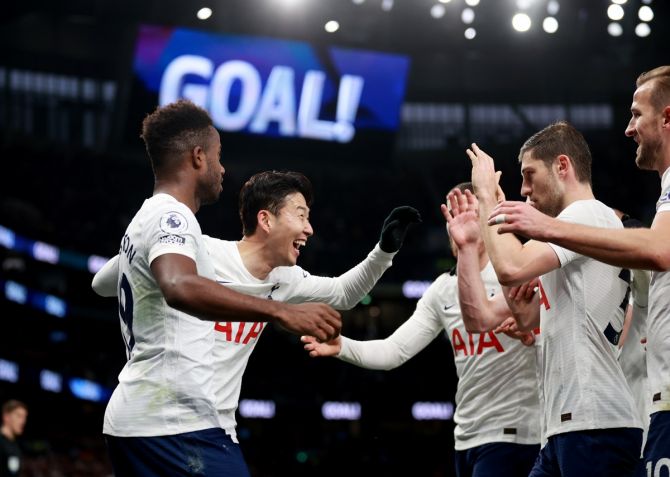 An early goal from Lucas Moura and two after half-time from Davinson Sanchez and Son Heung-min ensured a third successive Premier League win for Tottenham Hotspur as they beat Norwich City 3-0 at home on Sunday.

Victory lifted Spurs into fifth place with 25 points from 14 matches, 10 points off the top of the table but with a game in hand, as new manager Antonio Conte continued to make an impact.

Moura gave the home side a 10th-minute lead with a shot from outside the penalty area that proved as impressive a finish as the slick build-up that led to it.

Sanchez thrashed home a loose ball from close range from Son’s corner to double the lead after 67 minutes and effectively snuff out some enterprising passages of play from struggling Norwich.

Ten minutes later Son held off the visiting defence to work himself into position and smash the ball past Tim Krul in the Norwich goal.

Defeat for the Canaries was the first since Dean Smith took over as manager and left them bottom of the table.

They did create opportunities, however, with Teemu Pukki coming close to snatching a third-minute lead but hitting his shot straight at Spurs goalkeeper Hugo Lloris.

They were also well-placed to equalise soon after halftime but Adam Idah spurned a close-range chance with the goal at his mercy after Pukki had miscued an initial effort.

Spurs’s superior finishing made all the difference even if skipper Harry Kane failed to add to the single league goal he has scored this season.

Moura’s effort was powerfully hit, Sanchez showed split second reactions to snap up his goal after Ben Davies had flicked on Son’s corner and Son's powerful run past the Norwich defence also resulted in a well-taken goal.

It was the first time Spurs had scored three goals in a home league game this season. Leeds United striker Patrick Bamford marked his return from injury with a goal in added time as they snatched a 2-2 Premier League draw against Brentford in a high-intensity match at Elland Road.

Making his comeback from an ankle issue, substitute Bamford fired the ball into the net off the crossbar following a corner after Brentford's Sergi Canos and Shandon Baptiste scored to give the visitors a 2-1 lead.

Canos collected a pass from Bryan Mbeumo and smashed the ball past Leeds goalkeeper Illan Meslier in the 61st minute, shortly after midfielder Baptiste opened his account for Brentford with a controlled strike.

Earlier, Leeds striker Tyler Roberts netted his first of the campaign, meeting Raphinha's whipped cross with a sliding finish to give Alvaro Fernandez no chance in the Brentford goal.

Leeds lost captain Liam Cooper to a hamstring injury in the 15th minute while Kalvin Phillips was substituted after picking up a calf injury following the break, and hosts struggled to cope with their absence.

Marcelo Bielsa's Leeds were denied a second league win this week following Tuesday's 1-0 victory over Crystal Palace while Brentford, who began the season well after winning promotion, missed out on a second victory in eight games.