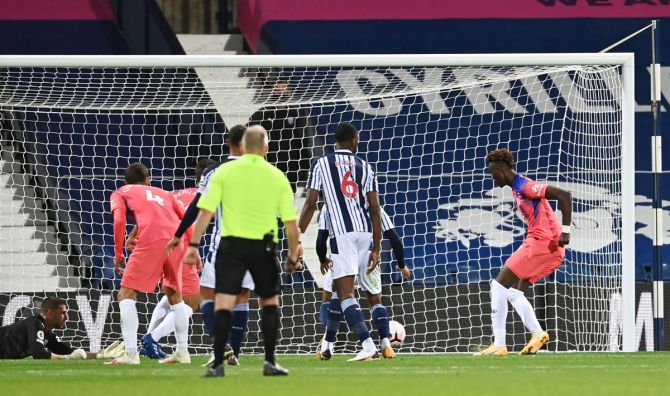 IMAGE: Tammy Abraham, at the far post, scores in the dying minutes of added to earn Chelsea a 3-3 draw against West Bromwich Albion, at the Hawthorns, on Saturday. Photograph: Laurence Griffiths

Chelsea striker Tammy Abraham struck a 93rd-minute equaliser as they battled back from three goals down to draw 3-3 at West Bromwich Albion in their Premier League clash on Saturday.

An error by Marcos Alonso led to Callum Robinson opening the scoring for West Brom in the fourth minute and the Irish striker forward made it two when Chelsea’s new signing Thiago Silva, who was given the captain’s armband, miscontrolled the ball. Kyle Bartley was left unmarked to add a third in the 27th minute with a close-range finish to send Chelsea in three down at the break, but Mason Mount threw the Blues a lifeline with a goal 10 minutes into the second half.

Callum Hudson-Odoi made it 3-2 in the 70th minute but it took until stoppage time for Chelsea to find an equaliser when Abraham pounced on a loose ball in the box and slammed it home to snatch a point for Frank Lampard’s side. 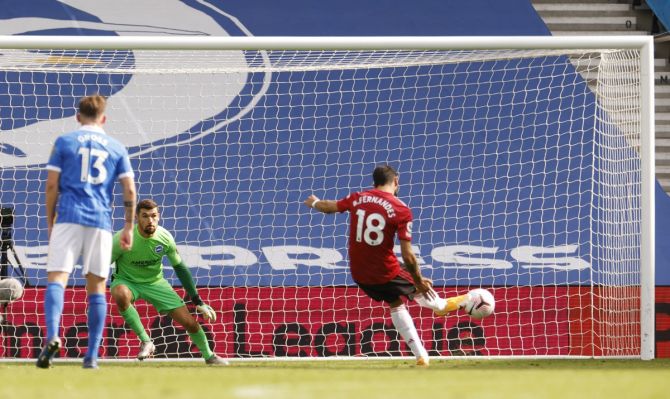 Manchester United beat Brighton & Hove Albion 3-2 away in the Premier League on Saturday after an incredible finale in which Bruno Fernandes struck the winning goal from the penalty spot in the ninth minute of stoppage time.

Neal Maupay had given away the penalty with a handball, which led to a VAR review, after referee Chris Kavanagh had blown the fulltime whistle. 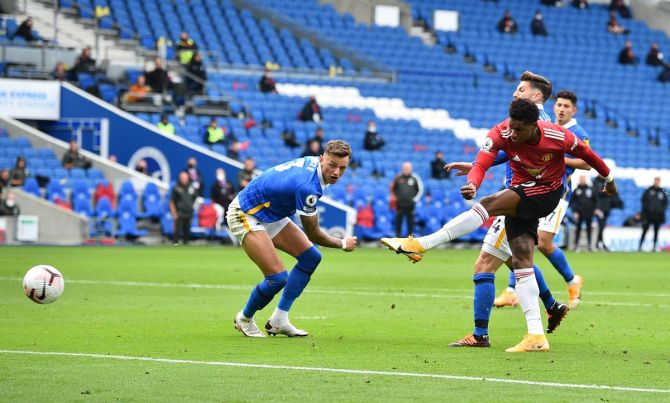 Kavanagh eventually gave the penalty and Fernandes lashed into the net from the spot, moments after Solly March had levelled for Brighton in the fifth minute of added time.

A brilliant solo strike from Marcus Rashford had given United the lead in the 55th minute after Rashford and Mason Greenwood had goals ruled out for offside and Brighton had seen a penalty decision overturned by a VAR review. 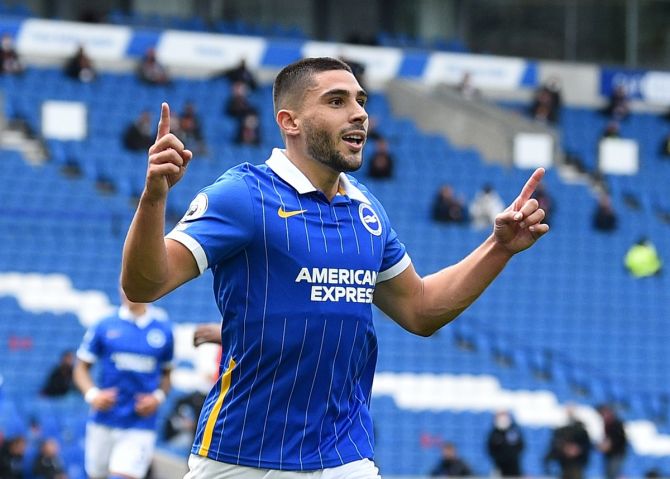 Brighton, who hit the woodwork five times, went ahead in the match when Maupay coolly slotted in a penalty in the 40th minute after a foul by Fernandes.

But the visitors soon levelled with an own goal from Brighton defender Lewis Dunk, who tried to prevent United captain Harry Maguire from reaching a Nemanja Matic pass following a free kick but instead sent the ball into the net. Everton made it three wins out of three as they topped the Premier League after a 2-1 victory at Crystal Palace on Saturday, won by a controversial penalty awarded for handball and converted by Richarlison.

Carlo Ancelotti's side grabbed the lead in the 10th minute when a superb pass from Colombian James Rodriguez found the overlapping Seamus Coleman who slipped the ball across for Dominic Calvert-Lewin to score for the third straight league game.

Palace drew level in simple fashion though with Cheikhou Kouyate heading in an Andros Townsend corner at the back post.

But five minutes before the interval, referee Kevin Friend awarded a penalty, ruling that Joel Ward had handled.

Lucas Digne had headed the ball at the Palace defender who appeared to try to pull his arm out of the way but, after being advised to check the pitchside monitor, Friend pointed to the spot and Richarlison drove home the penalty.

Palace dominated after the break but Everton defended well to maintain their 100% record.