Images from Monday's action in the Premier League. Chelsea notched up their fourth league win in a row under new coach Thomas Tuchel on Monday and striker Timo Werner ended his goal drought as the Blues beat Newcastle United 2-0 to leapfrog Liverpool into the Champions League qualifying places.

Werner, a desolate figure towards the end of Frank Lampard's time as Chelsea manager, made no mistake in the 39th minute when the ball fell for him at the far post and he put the hosts 2-0 up with his first league goal since early November.

The German also had a big role in Chelsea's opener eight minutes earlier when he got to the byline and his cross was pushed away by Newcastle goalkeeper Karl Darlow straight to the feet of Oliver Giroud who scored from 10 yards.

The France striker had replaced Tammy Abraham who was injured early in the game.

Tuchel gave out-of-favour goalkeeper Kepa Arrizabalaga his first league start since mid-October after his erratic form led to his replacement by Edouard Mendy.

The Spaniard saved well from a Joe Willock header in the 75th minute but had little else to do against an injury-hit Newcastle and Chelsea kept their fourth clean sheet in five league games under Tuchel. The German coach said after the game that Mendy remained his first-choice goalkeeper but he had wanted to give Arrizabalaga the chance to recover some of his confidence.

The win pushed the Londoners into fourth place, two points clear of out-of-form champions Liverpool and ahead of fifth-placed West Ham United on goal difference after the Hammers won earlier on Monday.

Newcastle stay in the last spot above the relegation zone, seven points clear of Fulham in 18th place.

Werner's last Premier League goal had come on Nov. 7 after which he suffered a run of bad luck and bad finishing which visibly hurt his confidence.

When he arrived in London last month, Tuchel told his German compatriot to play a little less wide than he had under Lampard and Werner looked more confident in recent games, creating key goals as Chelsea turned around their season.

"Of course for a striker, you always want to score," Werner told Sky Sports. "I have had in the past a lot of chances, and I missed them... And that's the important thing for me, that when I keep going, the goals will come like today."

West Ham up to fifth after easy win over Sheffield United West Ham United moved into fifth spot in the Premier League standings on Monday after an efficient 3-0 home win over bottom side Sheffield United at the London Stadium.

Declan Rice's 41st-minute penalty had the hosts in front at half-time. Issa Diop added a second in the 58th minute with a header and Ryan Fredericks scored with the last kick of the game.

David Moyes's team controlled the majority of proceedings against a spirited Sheffield United, who again paid a price for individual errors.

The result briefly meant West Ham moved into fourth spot on 42 points, just above champions Liverpool on 40. However, Chelsea's 2-0 win over Newcastle United in Monday's late game lifted them above the Hammers again on goal difference.

A fourth win in their last six league games boosted West Ham's hopes of a place in European club competition next season while keeping the Blades at the foot of the table with 11 points from 24 matches.

"If you look at last season when we were fighting relegation to where we are now, there's been a massive improvement," said captain Rice.

"It's massive to be in the top four and we need now to be pushing ourselves week in and week out."

The visitors received an early let off from VAR after Enda Stevens gave away a needless spot kick for a shove on West Ham defender Craig Dawson, as both were chasing the ball after goalkeeper Aaron Ramsdale had parried away a Rice free kick. 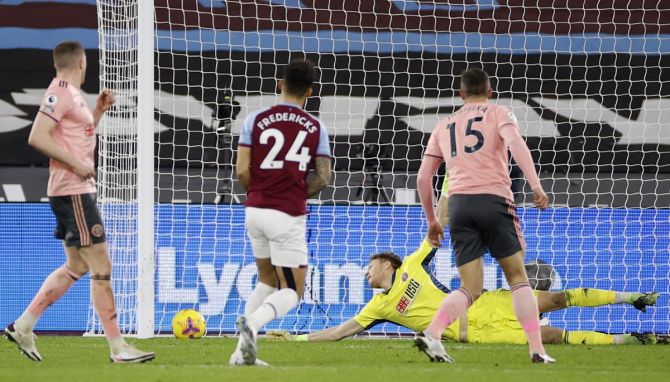 A VAR check found Dawson was offside when Rice struck the free kick, so the penalty was ruled out.

But six minutes from halftime, Blades defender Chris Basham tripped Jesse Lingard in another clumsy challenge to hand West Ham a first penalty of the league season, which Rice tucked into the corner.

Lingard again injected pace and energy into the West Ham attack as he continued to impress early into his loan spell from Manchester United.

It followed shortly after the best chance for the visitors when David McGoldrick’s headed effort was tipped over the crossbar by Lukasz Fabianski.

Fredericks tucked away a shot deep in stoppage time after being set up by fellow substitute Said Benrahma to round off a satisfying evening for the hosts and another disappointing one for the Blades.

"The game is hard enough for us in the Premier League, especially when we're not getting the results we want, and we can't make it even harder for ourselves, which we are doing now," Sheffield United boss Chris Wilder told BT Sport.