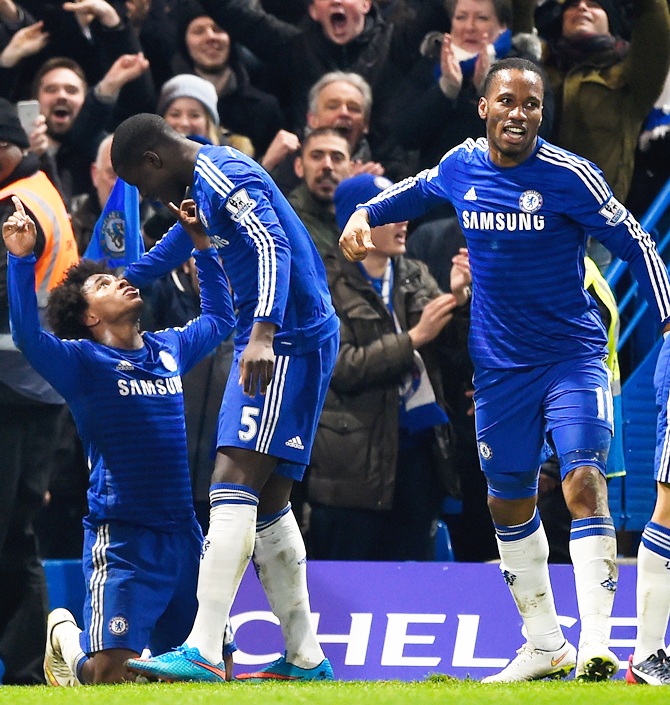 Willian's late strike snatched a 1-0 home win for Chelsea over a stubborn Everton side to maintain their seven-point lead over Manchester City who crushed Stoke City 4-1 in the Premier League on Wednesday.

Chelsea were frustrated before Brazilian Willian struck from 20 metres in the 89th minute to break the resistance of Everton whose midfielder Gareth Barry had been sent off just before the goal.

"It's beautiful to win in the last minute, and it's so sad (for Everton) to lose," Chelsea manager Jose Mourinho told BT Sport.

"They have to be very disappointed, they gave us a very difficult match. We are very, very happy and we think we deserve it. We risked a lot to try to win." 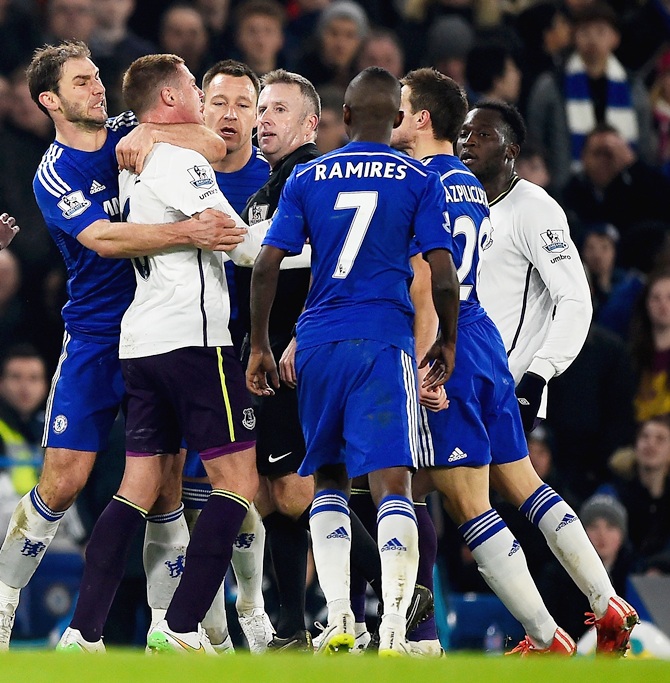 Chelsea struggled without the presence of top goalscorer Diego Costa, who was serving the last game of a three-match suspension for stamping, in the face of a stout Everton defence.

Former Chelsea striker Romelu Lukaku should have given Everton the lead against his old club but Petr Cech saved with his legs from close range.

The close shave gave the hosts greater impetus to attack and with time running out they looked to have taken the lead when defender Nemanja Matic struck but he was ruled offside.

A melee between both sides followed and Everton midfielder Barry was given his marching orders after receiving a second yellow card before Willian struck the winner a minute later. 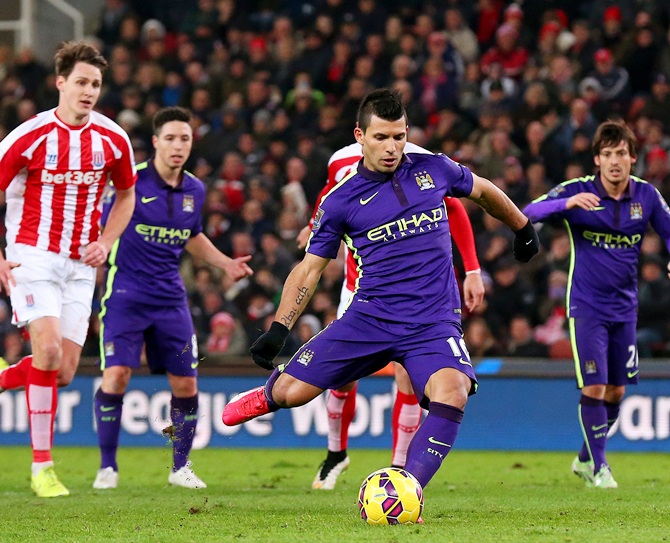 City kept pace with the leaders as striker Sergio Aguero scored twice, his first goals in over two months, to help the champions to their first league win in five matches at mid-table Stoke, who briefly made it 1-1 through Peter Crouch.

Argentina striker Aguero moved within one goal of the league's top goalscorer Costa after striking his 15th and 16th goals of the campaign in City's rout.

"The most important thing was to win and in the way we did today." 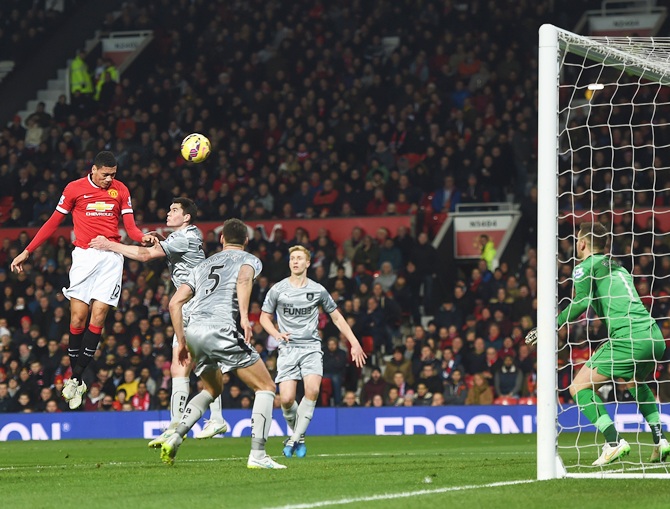 An unlikely brace from substitute defender Chris Smalling and a late Robin van Persie penalty lifted Manchester United to an unconvincing 3-1 home win over struggling Burnley who had equalised through Danny Ings.

United leapfrogged Arsenal and Southampton into third in the table after the latter drew 0-0 at home to West Ham United, who had goalkeeper Adrian sent off.

Smalling, who had previously scored only three league goals in his career, headed in a corner to give United the lead after six minutes with his first touch of the match, just 22 seconds after coming on for the injured Phil Jones, and he scored again just before the interval.

But the 3-1 win flattered Louis van Gaal's side, who were second best against 19th-placed Burnley for much of the match.

"I didn't like this performance today," the United manager said. "Of course, we have won and the result is fantastic. But after this match you cannot say that we are going up and I want to progress every match." 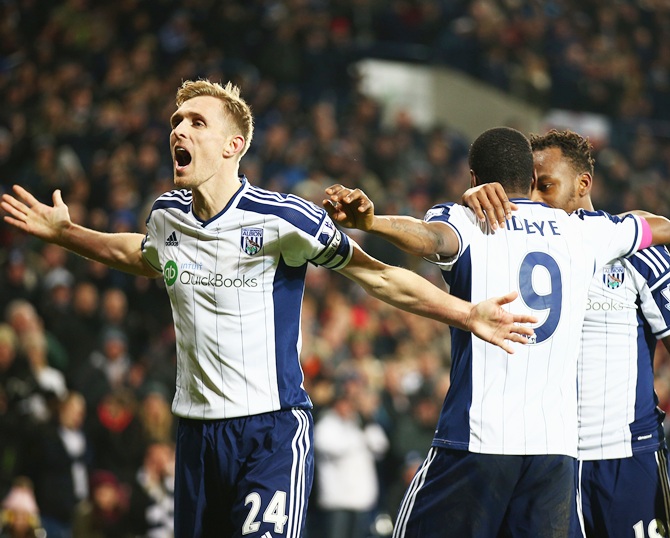 West Bromwich Albion continued their resurgence under new manager Tony Pulis as Brown Ideye and Saido Berahino struck in a 2-0 home win over Swansea City to lift their team away from the relegation zone.

A second-half Frazier Campbell goal earned Crystal Palace a 1-1 draw against Newcastle United as manager Alan Pardew hosted his former club who had taken a first-half lead through a Papiss Cisse header.

© Copyright 2020 Reuters Limited. All rights reserved. Republication or redistribution of Reuters content, including by framing or similar means, is expressly prohibited without the prior written consent of Reuters. Reuters shall not be liable for any errors or delays in the content, or for any actions taken in reliance thereon.
Related News: Chelsea, Everton, Manchester United, Sergio Aguero, Burnley
SHARE THIS STORYCOMMENT
Print this article 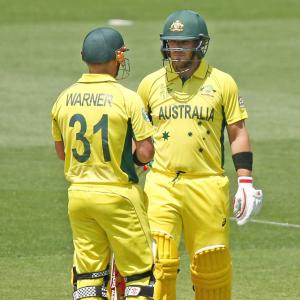 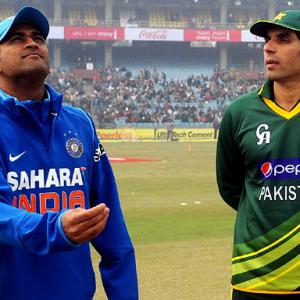